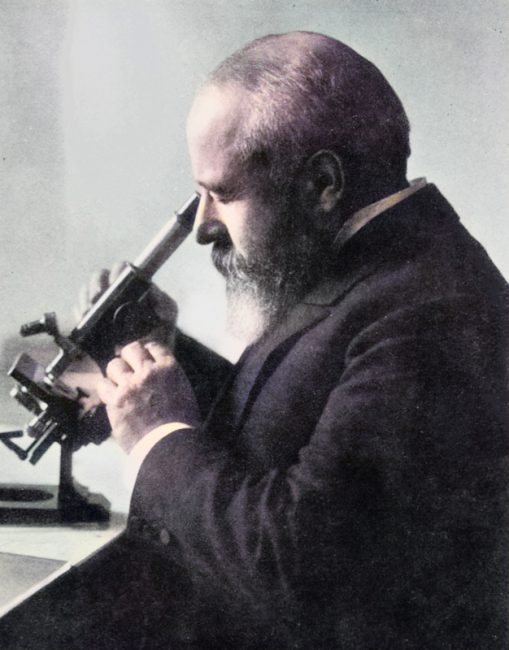 On September 8, 1850, German dermatologist Paul Gerson Unna was born, who was one of the pioneers in dermatopathology. He became known internationally in his field after writing a book on Histopathology of Skin Diseases (1884), which became a classic work. His name is also remembered for the Unna-Pappenheim stain, the most common stain for blood smears.

Paul Unna was born in Hamburg, the son of Moritz Adolph Unna, a physician descending from a Jewish family of physicians living in Hamburg since the 17th century. His elder sister was the renown portrait painter Julie de Boor. Unna was educated at the Gelehrtenschule at the Johanneum in Hamburg. Paul Unna had such a high esteem for his mother’s father that, before he had reached the age of 20, he asked the Senate of Hamburg for permission to take the name of his maternal grandfather, Gerson, as his own middle name. In 1870, Paul Unna became Paul Gerson Unna.[2]

Unna began to study medicine at the University of Heidelberg, but had to interrupt it in order to fight in the Franco-Prussian war, where he was severely wounded by a French rifle ball that shattered his thigh just three weeks before the armistice in early May 1871. After the war, he resumed his studies in Heidelberg and later went to the University of Leipzig, finally attaining a doctorate under Prof. Heinrich Wilhelm Waldeyer in Strasbourg, who is still remembered today because of several anatomical structures that bear his name and for having introduced hematoxylin for staining sections of tissues. His doctoral work was on the subject of the histology and development of the epidermis, and was published in 1876. The thesis “The development and anatomy of the human skin and its adnexa” (“Entwicklungsgeschichte und Anatomie der menschlichen Haut and ihrer Anhangsgebilde”)contained a set of new ideas and aspects that were met with hard criticism. They were accepted only after some corrections were made.

In 1876, Unna went on to receive his training in dermatology in Vienna, where he worked in cooperation with Ferdinand von Hebra, Moritz Kaposi and Heinrich Auspitz, among others. After his return to Hamburg, Unna started working in the clinical practice of his father, then in the Sankt Georg Hospital.

Unna’s main interest resided on dermatology: he opened his own practice for skin diseases in Hamburg in 1881, and later opened the Dermatologikum private dermatological hospital in Hamburg’s suburb Eimsbüttel, so that he could concentrate entirely on the field, beginning in 1884. This institution soon attracted large numbers of student from Germany and abroad. Also in 1884, Unna published his first book, Histopathologie der Hautkrankheiten (Histopathology of Skin Diseases), which exposed the entire knowledge in the field at that time and which made him one of the most prominent dermatologists of his time. The book became the basis for all those who were attracted to dermatology. Even today, the chapter on “Nevi” is a classic. Pathological complementation, enhanced with clinical details and therapeutic orientations, deserve special mention.[1] Besides describing all known skin diseases, Unna proposed new therapies.

In 1882, Unna, his school friend, Oskar Lassar, and Hans von Hebra, founded the Monthly Journal for Practical Dermatology (“Monatshefte für praktische Dermatologie”), whose name was later changed to Dermatologic Weekly (“Dermatologische Wochenschrift”). Among the therapeutic innovations published in this journal were compounds that still are used today, among them cignolin for the treatment of psoriasis, a plaster that became known as “Leukoplast,” and eucerin, known worldwide today as “Nivea Crème.”[2]

Among the innovations, in 1886 he proposed the use of ichthyol (ammonium bituminosulfonate, applied as e.g. against eczema and psoriasis) and resorcinol (a benzenediol, applied as e.g. against psoriasis, hidradenitis suppurativa, and eczema of a sub-acute character) against skin diseases. Unna investigated the biochemical processes of the skin and was the first to describe the stratum granulosum. In 1891, Unna, together with Henri Leloir of France, Malcolm Morris of England, and Louis Duhring of the United States, founded the International Atlas of Rare Skin Diseases. The purpose was to show examples of cutaneous maladies so instructive that they would be ideal for teaching teachers, not simply for enlightening students.[2] In 1894 he introduced layer projection as a method for skin investigations. In 1907 he received the title of professor from the Hamburg senate, and in the following year he became the chief physician of the Eppendorf hospital. In 1919 he became a professor at the University of Hamburg, receiving the first chair for dermatology.

He described the plasma cell, and conducted extensive research hunting the agent causing soft chancre, work he continued after the agent had been found by Agosto Ducrey. In 1927 he described for the first time what was to be called Unna’s disease, a chronic disease of the skin with seborrhea of the scalp and of the areas in the face and trunk that are rich in sebaceous follicles. Along with Arthur Thost, the Unna-Thost syndrome is named, a rare hereditary skin disease affecting the soles and palms. Also, a compression gauze used to treat venous leg problems is named Unna’s boot.

On January 25, 1929, Unna revised the manuscript of a brief autobiography. Four days later, at the age of 78, he died from an attack of influenza.[2]