You are here: Home › medical science › Luigi Galvani and the Discovery of Bioelectricity 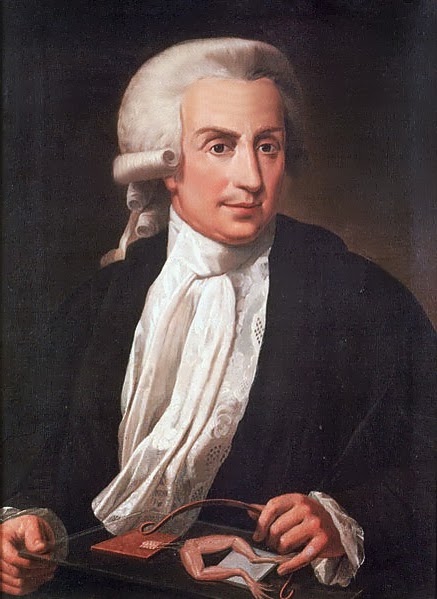 On September 9, 1737, Italian physician, physicist and philosopher Luigi Aloisio Galvani was born. He is best known for his discoveries in bioelectricity. In particular, he discovered that the muscles of dead frogs legs twitched when struck by a spark. As a legacy, Galvani’s name survives in the Galvanic cell, Galvani potential, galvanic corrosion, the galvanometer and galvanization. Moreover, his reports also heavily influenced famous author Mary Shelley writing her novel ‘Frankenstein‘.[4]

“When Aloisio Galvani first stimulated the nervous fiber by the accidental contact of two heterogeneous metals, his contemporaries could never have anticipated that the action of the voltaic pile would discover to us, in the alkalies, metals of a silvery luster, so light as to swim on water, and eminently inflammable; or that it would become a powerful instrument of chemical analysis, and at the same time a thermoscope and a magnet.”
— Alexander von Humboldt, in ‘Introduction’ Cosmos: A Sketch of a Physical Description of the Universe (1860), Vol. 1

Luigi Galvani was born in Bologna, by then part of the Papal States, the son of Domenico Galvani and Barbara Foschi, a young woman from a good family from Bologna. Galvani and his elder half-brother, Francesco, spent a serene and rather affluent childhood, of which we have little information. A fundamental role in the education of the young Galvani should be attributed to the education received by the Philippine Fathers of the Oratory of San Filippo Neri. Originally, it was Galvani’s wish to enter church which he did at the age of 15. Surprisingly it were his parents who had a hard time persuading him not to stay in this institution and to try something different. He enrolled at the University of Bologna in 1755 and gained his interest in medicine, which he continued to study for several years. In 1759, Galvani graduated with degrees in medicine and philosophy. Next to pure medicine, he also increased his abilities in surgery which helped him to perform his experiments in later years. Galvani became a lecturer at the university and in 1775 even professor. During this period he deepened his knowledge in anatomy which he also taught his students. 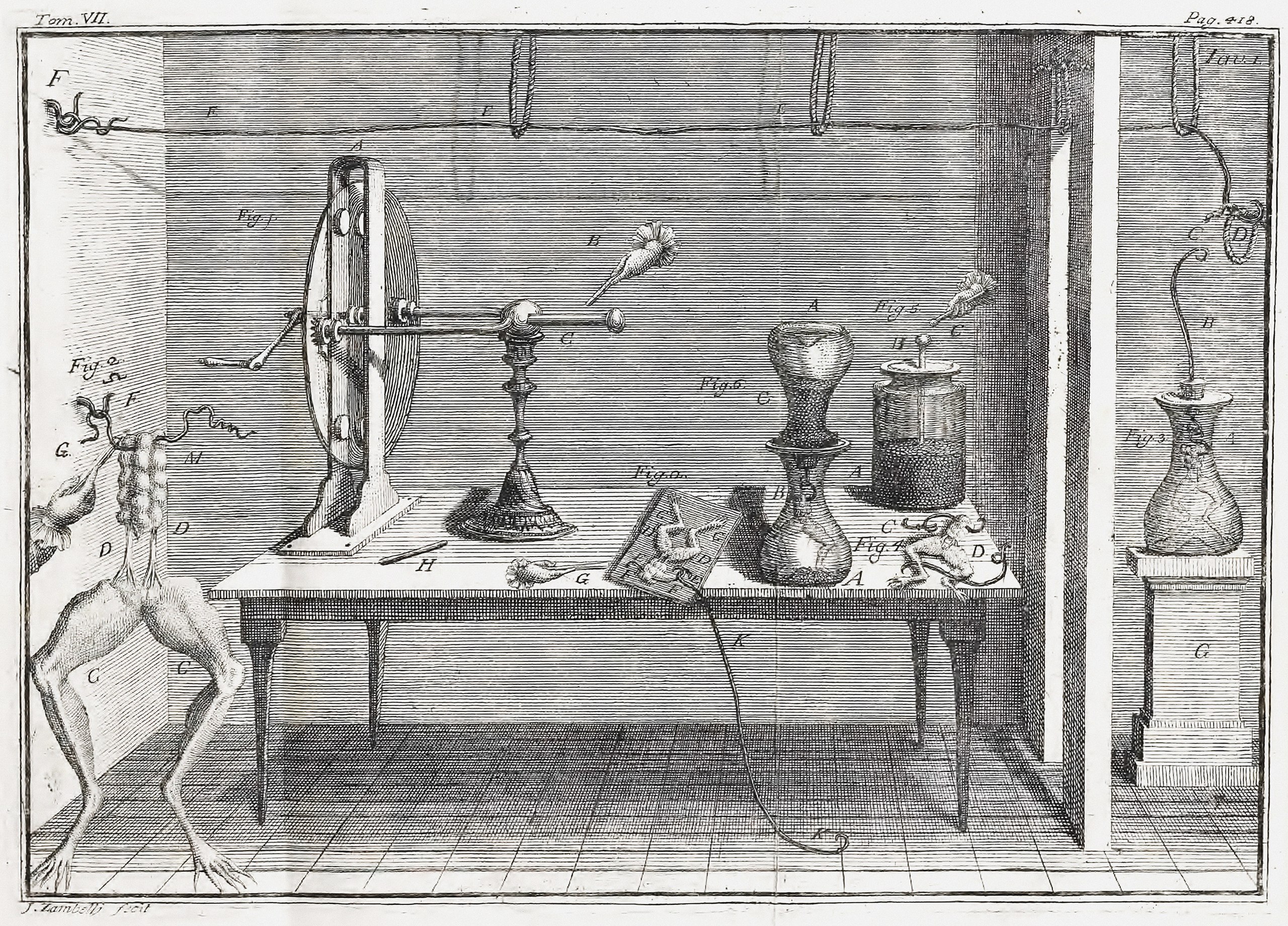 Experimental arrangement of the frog leg experiment, from the De viribus electricitatis in motu musculari

From the Anatomy of Birds to Electricity

The applause that his treatise De renibus atque ureteribus volatilium of 1767 received led him to the decision to study the physiology of birds; however, he later limited himself to examining their auditory organs. A few years into research, Galvani discovered his interest in medical electricity and began researching the effects of electricity on the human body. During laboratory experiments, Galvani and his assistant were skinning a frog while the assistant touched a static nerve with a metal scalpel that picked up a charge. Both observed sparks and a kicking of the dead frog’s leg. This accidental experiment was a great influence to the field of medicine and anatomy. It was now understood that muscle movement was based on electrical energy instead of air or fluids, disproving the balloonist theories. Back then, Galvani named this phenomenon describing the force that activates muscle movements as animal electricity. Today, Galvani is credited with the discovery of bioelectricity. So Galvani unknowingly created an electric circuit consisting of two different metals, an electrolyte (“salt water” in the frog’s leg) and a “current indicator” (muscle). Galvani did not yet recognize these connections, but he laid the foundation for the development of electrochemical cells

Galvani noticed that a frog’s leg that was in contact with a knife blade always jerked when a spark jumped across a nearby high-voltage machine. He was convinced – probably also due to the famous lightning conductor experiments conducted a few decades earlier by Benjamin Franklin – that lightning storms are in principle also such sparks, only much larger.[5] For example, he led an insulated wire from the ridge of a house into the garden to a frog’s leg. A second wire led from the frog’s leg into a well. As often as lightning flashed during a nearby thunderstorm, the frog’s leg would start moving before the corresponding thunder could be heard.

During the reign of terror of the French Revolution, Galvani refused to take an oath to the new government. Through the Welfare Committee, he then lost his office, but was reinstated after 1794. Galvani died peacefully surrounded by his mother and father, in his brother’s house depressed and in poverty, on 4 December 1798.