You are here: Home › philosophy › Sir Francis Bacon and the Scientific Method 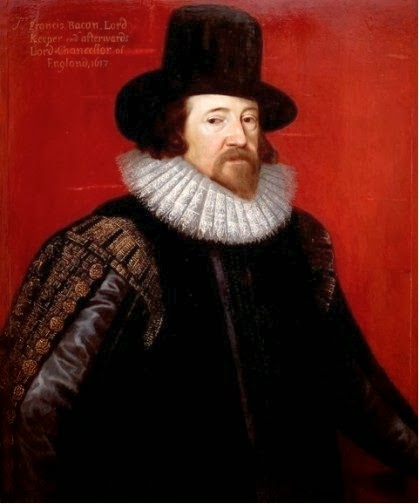 “Knowledge, that tendeth but to satisfaction, is but as a courtesan, which is for pleasure, and not for fruit or generation.”
— Francis Bacon, as quoted in Valerius Terminus: Of the Interpretation of Nature (ca. 1603)

How did science work before Francis Bacon? Today, the scientific method of empiricism has become a common knowledge. We observe nature and based on our observation, we try to find out about underlying principles, laws, or systems. Vice versa, via logical conclusions we derive a theoretical system, which we try to validate via observations. Fair enough, but science did not work that way all the time throughout history. Just think about the middle ages. In the middle ages, science was dominated by the method of scholasticism. Scholasticism means that you always try to refer to authoritative sources, whenever you are in question. In the Christian middle ages of course ‘authoritative sources’ referred to the writings of Aristotle, the Fathers of the Church and finally the Holy Bible. Whenever you made a hypothesis, you tried to find a logical chain of consequences and inferences leading to one of the canonical sources. On the other hand, you can find contradictions in the same way. As an obvious fact, scholasticism means that the world as well as the view of the world is fixed by its canonical interpretations and cannot be changed. In consequence, this might easily become an obstacle for scientific progress.

Francis Bacon was born on 22 January 1561 at York House near the Strand in London, the son of Sir Nicholas Bacon by his second wife, Anne. Owing to his poor health, which would plague him throughout his life, Bacon was first educated at home. In 1573, he entered Trinity College, Cambridge, where he followed the then usual medieval curriculum. Bacon’s studies brought him to the belief that the methods and results of science as practized following the principle of scholasticism were erroneous. His reverence for Aristotle conflicted with his loathing of Aristotelian philosophy, which seemed to him barren, disputatious, and wrong in its objectives.

During his following travels in France, Italy, and Spain as a part of the English ambassador’s suite, Bacon studied language, statecraft, and civil law while performing routine diplomatic tasks. In 1582, Bacon was entitled a barrister, but although his career at court was successful, he had other political and philosophical ambitions. In 1591 Bacon befriended the Earl of Essex to whom Bacon offered the friendly advice. Essex in turn recommended Bacon for several high offices without, however, attaining any position. The relationship ended tragically in a failure of an expedition by Essex and his later attempted coup d’etat, which cost the head of Bacon’s protector, Essex, in 1604. However, Bacon was then steadily promoted to a series of offices, including Solicitor General (1607), Attorney General (1613), and eventually Lord Chancellor (1618).

But, Bacon’s real interests lay in science. Scholasticism was based on the work of the ancient Greek philosopher Aristotle. While many Aristotelian ideas, such as the position of the earth at the centre of the universe, had been overturned, his methodology was still being used. This held that scientific truth could be reached by way of authoritative argument: if sufficiently clever men discussed a subject long enough, the truth would eventually be discovered. Bacon challenged this, arguing that truth required evidence from the real world. He published his ideas, initially in ‘Novum Organum‘ (1620), an account of the correct method of acquiring natural knowledge. 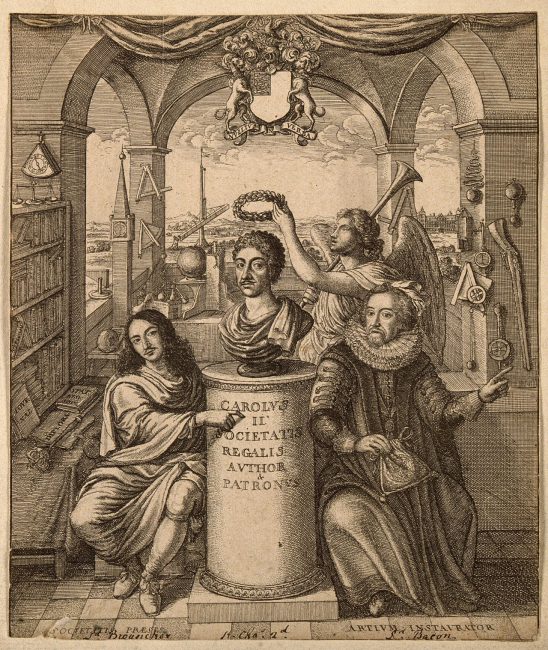 Francis Bacon and William Brouncker flanking a bust of King Charles II set on a pedestal, surrounded by signs and symbols of scientific learning in a rooftop room at Gresham College. Engraving by W. Hollar, 1667.

The Organisation of Knowledge

Francis Bacon developed the idea that a classification of knowledge must be universal while handling all possible resources. In his progressive view, humanity would be better if the access to educational resources were provided to the public. Hence the need to organize it. His approach to learning reshaped the Western view of our knowledge theory from an individual to a social interest. The original classification proposed by Bacon organized all types of knowledge in three general groups: history, poetry, and philosophy. He did that based on his understanding of how we process information: Memory, Imagination, and Reason, respectively. His methodical approach to the categorization of knowledge goes hand in hand with his principles of scientific methods.  We owe Bacon, not only his inductive approach to science, but his efforts to bring his meticulous and systematic vision to the organization of information which was the platform for further research and advancement for centuries after him.

While serving as Chancellor, Bacon was indicted on charges of bribery and forced to leave public office. After pleading guilty, he was heavily fined and sentenced to a prison term in the Tower of London. He was a disgraced and fallen man. He then retired to his estate where he devoted himself full time to his continuing literary, scientific, and philosophical work. He died in 1626 of pneumonia contracted whilst testing his theory of the preservative and insulating properties of snow.

“Those who have taken upon them to lay down the law of nature as a thing already searched out and understood, whether they have spoken in simple assurance or professional affectation, have therein done philosophy and the sciences great injury. “
— Francis Bacon, Novum Organum, (1620)

The cultural legacy left behind by Francis Bacon includes most of the foundation for the modern world as we currently know it. To the mysteries surrounding Francis Bacon counts that he is also a noted contender in the William Shakespeare Identity debate. According to some scholars Bacon is believed to be the author of the plays accredited to William Shakespeare.[5] During the Restoration, Bacon was commonly invoked as a guiding spirit of the Royal Society founded under Charles II in 1660. During the 18th-century French Enlightenment, Bacon’s non-metaphysical approach to science became more influential than the dualism of his French contemporary Descartes,[7] and was associated with criticism of the ancien regime. In 1733 Voltaire [8] introduced him to a French audience as the “father” of the scientific method, an understanding which had become widespread by the 1750s. In the 19th century his emphasis on induction was revived and developed by William Whewell, among others. He has been reputed as the “Father of Experimental Philosophy“.