You are here: Home › computer science › It’s a computer! – The fabulous Commodore Amiga 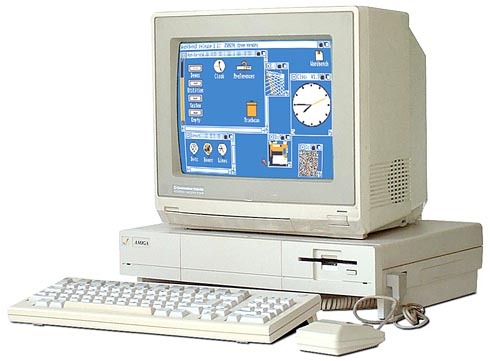 In 1985 Commodore revolutionized the home computer market by introducing the high end Commodore Amiga with a graphic power that was unheard of by that time in this market segment. Based on the Motorola 68000 microprocessor series the Amiga was most successful as a home computer, with a wide range of games and creative software, although early Commodore advertisements attempted to cast the computer as an all-purpose business machine. In addition, it was  also a less expensive alternative to the Apple Macintosh and IBM-PC as a general-purpose business or home computer. The platform became particularly popular as a gaming platform.

“The Amiga was so far ahead of its time that almost nobody — including Commodore’s marketing department — could fully articulate what it was all about. Today, it’s obvious the Amiga was the first multimedia computer, but in those days it was derided as a game machine because few people grasped the importance of advanced graphics, sound, and video. Nine years later, vendors are still struggling to make systems that work like 1985 Amigas.” (Byte Magazine, August 1994)

A Little Bit of History

Jay Miner was the creator and spiritual father of the Amiga. He left Atari in 1981, where he was responsible for the development of the Atari 2600 game console and the Atari 400 and 800 home computers. Then he founded the company Hi Toro, which later became the Amiga Corporation. In the beginning Amiga provided game modules and controllers for the Atari-2600 console, later an own Amiga game console was planned. The game console became a computer in the minds of the developers. Atari – then owned by Warner Communications and led by Ray Kassar – was the financier by agreement in July 1983 and wanted to launch the Amiga as the successor to the now obsolete XL computer series. With the stock market scandal of December 1982 on his back, Kassar had to resign in July 1983. The new CEO Morgan continued to pursue the goal of bringing the Lorraine project, as the Amiga was internally called, to market maturity as the successor to the XL. On July 2, 1984, Warner Communications sold the console and computer division of Atari to Jack Tramiel, the then fired founder of Commodore. Tramiel tried to buy Amiga for good and offered shareholders $0.98 per share. Commodore (under Irving Gould) finally offered 4.25 US dollars per share shortly before the end of the 24-hour period and was awarded the contract according to which Commodore influenced the development direction of the Amiga more and more – according to critics not always in the spirit of the inventors or to the advantage of the Amiga. Commodore almost overstrained itself with this acquisition and the subsequent product launch and entered into a serious financial crisis.

The Juggler Demo, released in 1986, was the first animation that demonstrated the ray tracing capabilities of the Commodore Amiga.

The first Amiga model – later called Amiga 1000 – was presented on July 23, 1985 in New York during a big show, where the pop-art artist Andy Warhol re-colored a just made image of the singer of the band Blondie, Deborah Harry, on the Commodore Amiga, while the audience was there live. The developers also demonstrated the special features that set the Amiga apart from its contemporary competitors IBM PC, Macintosh and Atari ST:

The name Amiga was chosen by the developers from the Spanish word for a female friend, because they knew Spanish, and because it occurred before Apple and Atari alphabetically. It also conveyed the message that the Amiga computer line was “user friendly” as a pun or play on words. Early Commodore advertisements attempted to cast the computer as an all-purpose business machine, though the Amiga was most commercially successful as a home computer.

All Amiga systems can display full-screen animated graphics with up to 4,096 colors or even 16.8 million colors. Also a possibility to overlay external video sources with graphics was possible with the so-called genlock interface. Some frequent users of this ability included wedding videographers, TV stations and their weather forecasting divisions (for weather graphics and radar), advertising channels, music video production, and ‘desktop video‘. Notable example for the application of Amiga graphic capabilities was the rendering of Season 1 and part of season 2 of the television series Babylon 5. Amigas were also used in various NASA laboratories to keep track of multiple low orbiting satellites, and were still used up to 2003/2004 (dismissed and sold in 2006). This is another example of long lifetime reliability of Amiga hardware, as well as professional use.

After Commodore went bankrupt in 1994, there remained a very active Amiga community, which continued to support the platform long after mainstream commercial vendors abandoned it. Commodore’s assets were purchased by Escom, a German PC manufacturer, who created the subsidiary company Amiga Technologies. They re-released the A1200 and A4000T, and introduced a new 68060 version of the A4000T. However, Escom in turn went bankrupt in 1997.