You are here: Home › computer science › Who remembers Apple’s Lisa? 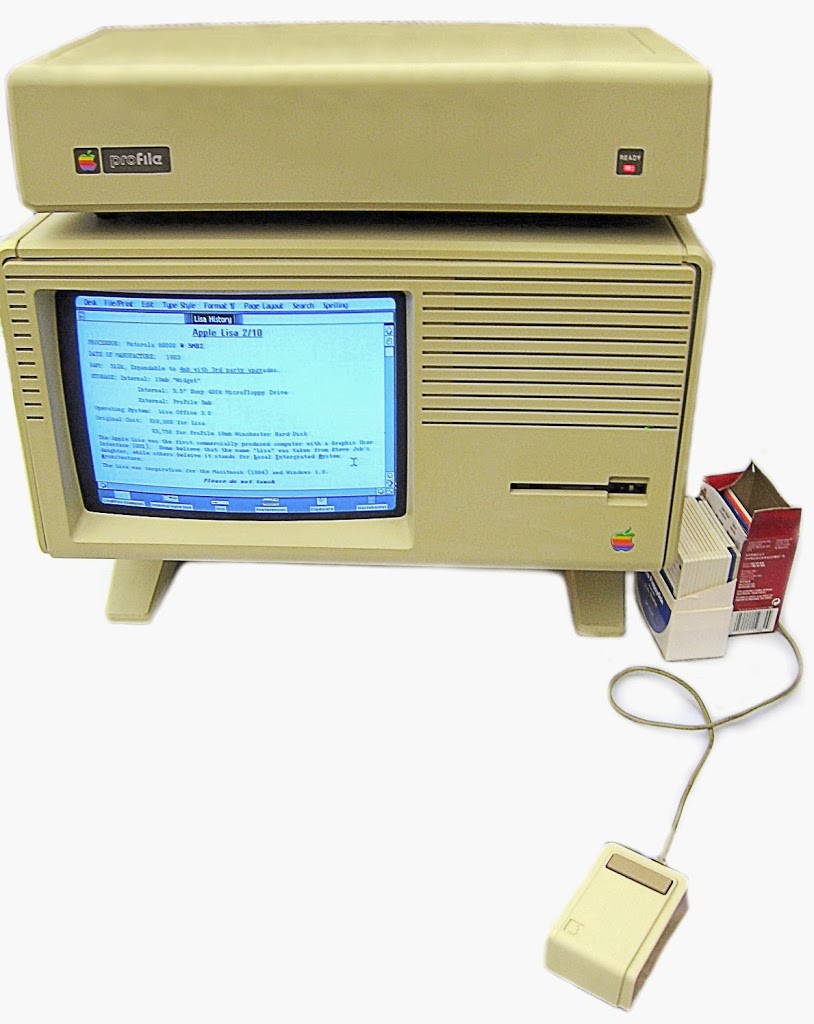 On January 19, 1983, the Apple Lisa was introduced, the first personal computer to offer a graphical user interface in an inexpensive machine aimed at individual business users. Although a commercial failure, the Lisa paved the way for the famous Apple MacIntosh released in 1984 [4]. I don’t know if you are old enough to remember the early 1980s. But the era of personal computers had just began, which means there were small computers with a textline based operating system. Graphical user interfaces were completely out of reach, left out the famous Xerox Alto computer from the mid 1970s, which really was ahead of its time with its windows based operating system and its mouse input device.

Actually, in December 1979, Apple co-founder Steve Jobs visited Xerox PARC [5], where he was shown the Smalltalk-80 object-oriented programming environment, networking, and most importantly the WYSIWYG, mouse-driven graphical user interface provided by the Alto. He reportedly was not impressed by the first two, but was excited by the last one, and promptly came up with the plan to integrate this into the computers of his own company. I saw the Lisa for the first time in the late 1980s, when a fellow student – an early MacIntosh afficionado – bought it on a flea market for used computers. Unfortunately he didn’t succeed to bring it back to life, but it was the very first time that I learned about a computer that preceeded the Apple MacIntosh, but already included most of its outstanding features.

Apple’s Lisa project already began in 1978 as an effort to create a more modern version of the then-conventional design of the Apple II personal computer. Under the direction of John Couch the project evolved to the ‘windows & mouse-driven’ form that was finally released. By late 1979, Jobs successfully negotiated with Xerox for his Lisa team to receive two demonstrations of ongoing research projects at Xerox PARC. When the Apple team saw the demonstration of the Alto computer they were able to see in action the basic elements of what constituted a workable GUI. A great deal of work was put into making the graphical interface into a mainstream commercial product by the Lisa team. The Lisa was a major project at Apple, which reportedly spent more than $50 million on its development. After a six-month period in which the user interface was designed, the hardware, operating system, and applications were all created in parallel.

The Lisa was first introduced on January 19, 1983 and cost US$9,995, being the second personal computer system with a graphical user interface (GUI) to be sold commercially. It’s hardware was based on a Motorola 68000 CPU clocked at 5 MHz with a main memory of 1 MB RAM and two 5.25-inch double-sided floppy disk drives. An optional external 5 MB or, later, a 10 MB Apple ProFile hard drive also was available for the Lisa. According to the BYTE magazin, the Lisa was “the most important development in computers in the last five years, easily outpacing [the IBM PC]“.

…and Why it Failed

Unfortunately, the Apple Lisa was a commercial failure for Apple. The intended business customers were reluctant to purchase the machine because of its high price. Therefore, the Lisa was not able to compete with the less expensive IBM PC,[7] which already started to dominate business desktop computing. Soonafter, the Lisa 2 was released in January 1984 and was priced between $3,495 and $5,495 US. The release of the Apple Macintosh in 1984, which was faster and much less expensive, was the most significant factor in the Lisa’s demise. In January 1985, following the Macintosh, the Lisa 2/10 was re-branded the Macintosh XL and with new software, positioned as Apple’s high-end Macintosh. Another important innovation introduced with the Apple Lisa was its early approach of document-centric computing instead of application-centric computing, while working with a Macintosh, Windows, or Linux system, a user typically first had to run a program and then to open a document [6].