You are here: Home › physics › Claude Debussy – More than just the Link between Romanticism and Modernity 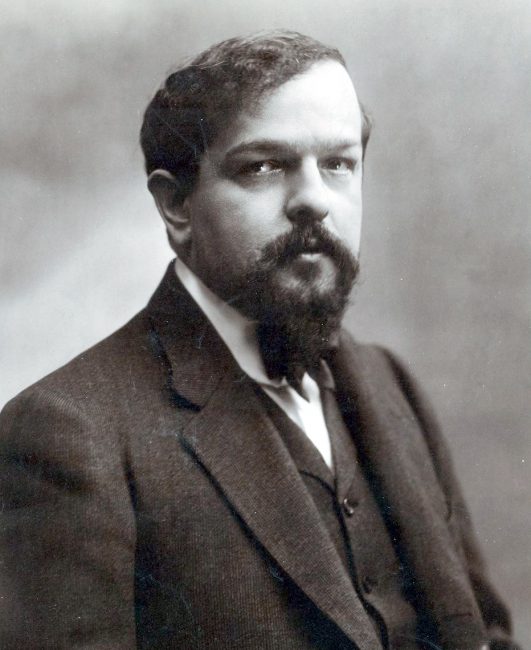 On August 22, 1862, French composer Claude Debussy was born. Debussy’s music is regarded as a link between romanticism and modernity. He was among the most influential composers of the late 19th and early 20th centuries. For me, his Claire de Lune is one of the most beautiful pieces for piano I have ever played.

“The colour of my soul is iron-grey and sad bats wheel about the steeple of my dreams.”
— Claude Debussy, Letter to Ernest Chausson (1894)

Born in Saint-Germain-en-Laye, the first of five children, Claude Debussy was registered as the son of Manuel-Achille Debussy and his wife Victorine. He was not baptized until two years later, which was unusually late for that time. Debussy grew up in humble circumstances. His father ran a stoneware and porcelain shop in Saint-Germain. This he had to give up a few years after Debussy was born, as it was not profitable. After leaving the company, Manuel-Achille Debussy moved with his family to Paris and worked as an accountant for a railway company. He never went to school. His mother taught him the basics of reading, writing and arithmetic.

Music did not play a special role at the Debussy family. It was his godfather Achille Arosa who made Debussy’s first piano lessons possible. By chance, Madame Mauté de Fleurville became aware of the child, a woman from wealthy circles who claimed to have been a student of Chopin. She offered her parents Claude’s piano training. Within two years Debussy made her a successful candidate for the Paris Conservatory. Only one year after his recording Debussy visited the upper class with Antoine François Marmontel.

The 13 years of music studies that Debussy spent at the conservatory from the age of 10 or 11 were marked by very different experiences. Albert Lavignac, 27, was very sympathetic to his young student’s rebellion, while Marmontel, who had been a teacher at the conservatory for 30 years, was determined to put a stop to the impetuousness of his musical talent for nature. After first success in piano competitions, he decided not to become a piano virtuoso. Finally Debussy was accepted into the composition class with 1st prize in piano accompaniment. In 1880, at the age of 18, Debussy was not yet able to earn money with music alone. He therefore took the opportunity to accompany Nadezhda Filaretovna von Meck (who also supported Peter Tchaikovsky for a lifetime) on her travels through Europe and to give her children piano lessons.

In 1884 he won the Prix de Rome with his composition L’Enfant prodigue. Now he was allowed to pursue his musical studies at the Roman Villa Medici for four years at the expense of the state. In the spring of 1886 he temporarily withdrew from institutional life and travelled to Paris. There he met Franz Liszt,[1] Giuseppe Verdi [2] and Ruggero Leoncavallo, among others, but the scholarship was not intended to spend the financed time doing nothing. Debussy had to present the results of his compositional studies. Debussy finally composed four pieces that were submitted to the Academy: the symphonic ode Zuleima (based on a text by Heinrich Heine)[3]; the orchestral piece Printemps; the cantata La Damoiselle élue (1887–1888), the first piece in which the stylistic features of his later music began to emerge; and the Fantaisie for piano and orchestra, which was heavily based on Franck’s music and was eventually withdrawn by Debussy. The Academy chided him for writing music that was “bizarre, incomprehensible and unperformable“.

A week after his return to Paris in 1887, Debussy heard the first act of Richard Wagner‘s [4] Tristan und Isolde at the Concerts Lamoureux, and judged it “decidedly the finest thing I know“. In 1888 and 1889 he went to the annual festivals of Wagner’s operas at Bayreuth. He responded positively to Wagner’s sensuousness, mastery of form, and striking harmonies, and was briefly influenced by them, but, unlike some other French composers of his generation, he concluded that there was no future in attempting to adopt and develop Wagner’s style.

With his contemporary Erik Satie he was associated with an artist friendship that was marked by mutual admiration. Both had in common an effort to overcome traditional musical forms. While Satie took the path of musical simplification and banalization, striving for an almost formlessness, Debussy considered an alternative to the classical-romantic tradition to be necessary from both a harmonic and formal point of view. In his search for such alternatives he intensively occupied himself with traditional music from non-European cultural circles, similar to Béla Bartók a little later.

In 1889, at the Paris Exposition Universelle, Debussy first heard Javanese gamelan music. The gamelan scales, melodies, rhythms, and ensemble textures appealed to him, and echoes of them are heard in “Pagodes” in his piano suite Estampes. He also attended two concerts of Rimsky-Korsakov’s music, conducted by the composer. This too made an impression on him, and its harmonic freedom and non-Teutonic tone colours influenced his own developing musical style.

Around 1888/89 Debussy had an affair with Camille Claudel, which ended in 1891. For years Debussy had a relationship with Gabrielle Dupont, a young girl he is said to have met in a “frivolous place”. Gaby “with the green eyes” took care of Debussy’s household and kept the worst everyday problems off his back. However, when Gaby found a letter in 1897 from which she had to conclude Debussy’s secret romance with another woman, there was a fierce dispute in the course of which Gaby directed a revolver at herself and had to be seriously injured in hospital.

Debussy also met Maurice Ravel. Their distanced friendship was shattered by a calculated provocation by music critic Pierre Lalo (he accused Ravel of plagiarizing his older colleagues). It is astonishing that both often chose the same themes for their musical arrangements. The strangest event in this context happened in 1913: under the same title Trois Poèmes de Stéphane Mallarmé, both Ravel and Debussy set three poems by the poet to music, two of which (Soupir and Placet futile) were thematized in both works.

In 1901 Debussy had met the banker’s wife Emma Bardac. A secret love affair soon became public, prompted his wife to attempt suicide (also with the revolver) and caused a public scandal – Debussy had become a celebrity to whom one would not want to admit such “aberrations”. Thereupon he broke up with almost all his friends and filed for divorce.

On 30 October 1905 Emma-Claude, known as “Chouchou”, was born to Debussy and Bardac’s daughter. He dedicated the Children’s Corner to her. The birth was legitimized in marriage only in 1908, the divorce proceedings had delayed the marriage for years. On 13 May 1909 Debussy was diagnosed with cancer (intestinal cancer). By 1915 it had progressed so far that in December he decided on an operation that did not improve and only prolonged his suffering. Invalidity caused his creative power to fade. He died of his illness on 25 March 1918.

Debussy’s breakthrough came with Prélude à l’après-midi d’un faune, inspired by a poem by Stéphane Mallarmés, which premiered in Paris on December 22, 1894. Despite a length of only about ten minutes, the piece must be described as Debussy’s first important major work, because all aspects of an independent tonal language manifest themselves in it for the first time. The skilful and chamber music instrumentation as well as the bold harmony are combined with an advanced architecture of the proportions of the piece. These features also appeared in later works and have led many 20th century composers to regard Debussy’s music as an essential starting point for New Music.