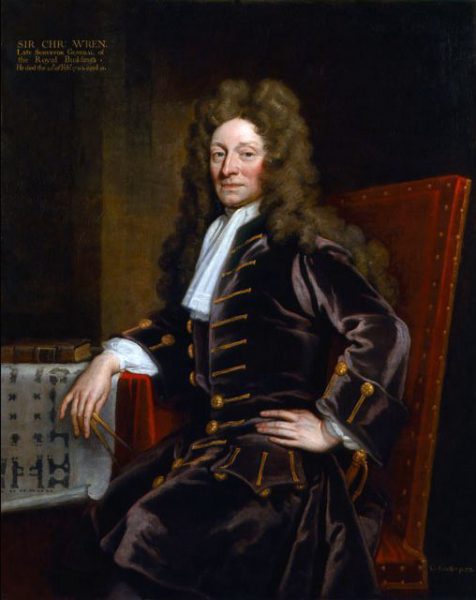 On October 20, 1632 (October 30 according to the new Gregorian calendar), one of the most highly acclaimed English architects in history, Sir Christopher Wren was born. He was accorded responsibility for rebuilding 52 churches in the City of London after the Great Fire in 1666, including what is regarded as his masterpiece, St Paul’s Cathedral, on Ludgate Hill, completed in 1710.

“Architecture has its political Use; publick Buildings being the Ornament of a Country; it establishes a Nation, draws People and Commerce; makes the People love their native Country, which Passion is the Original of all great Actions in a Common-wealth…. Architecture aims at Eternity.”
– “Of Architecture”, Parentalia; or Memoirs of the Family of the Wrens, comp. by his son Christopher (1750, reprinted 1965), Appendix, p. 351.

Christopher Wren was born in East Knoyle in Wiltshire, the only surviving son of Christopher Wren Sr., at that time the rector of East Knoyle and later Dean of Windsor, and Mary Cox. Although a sickly child, Wren would survive into robust old age. He was first taught at home by a private tutor, Rev. William Shepherd, a local clergyman, and his father. After his father’s royal appointment as Dean of Windsor in March 1635, his family spent part of each year there, but little is known about Wren’s life at Windsor. According to his biography Parentalia compiled by his son Christopher, he visited Westminster School between 1641 and 1646. However, he must have received a solid grounding in Latin and also learned to draw. According to Parentalia, Wren was initiated in the principles of mathematics by Dr William Holder. Wren’s drawing was put to academic use in providing many of the anatomical drawings for the anatomy textbook of the brain, Cerebri Anatome (1664), published by Thomas Willis, which coined the term “neurology.”

On 25 June 1650, Wren entered Wadham College, Oxford, where he studied Latin and the works of Aristotle. Wren became closely associated with John Wilkins,[10] the Warden of Wadham. The Wilkins circle was a group whose activities led to the formation of the Royal Society, comprising a number of distinguished mathematicians, creative workers and experimental philosophers. Wren graduated B.A. in 1651, and two years later received M.A in 1653. In the same year Wren was elected a fellow of All Souls College, Oxford, and began an active period of research and experiment, ending with his appointment as Gresham professor of astronomy in Gresham College, London, in 1657. 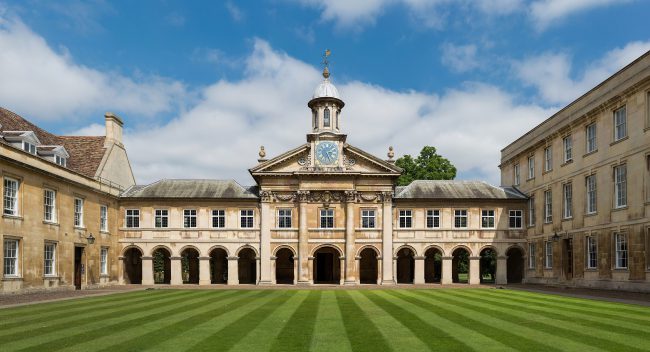 Restauration and the Royal Society

With the death of Oliver Cromwell in 1658 and the ensuing political turmoil, Gresham College was occupied by the military, and Wren returned to Oxford, where he probably remained during the events that led to the restoration of Charles II in 1660, and then returned to Gresham College. There, he resumed his scholarly activity and together with his intellectual circle proposed a society “for the promotion of Physico-Mathematicall Experimental Learning”, which, after obtaining the patronage of Charles II became the Royal Society.[1,2]

Wren became Savilian Professor of Astronomy at Oxford in 1661 and held this post until 1673. It was after this appointment that he made his important contributions to mathematics. Sir Isaac Newton, never one to give excessive praise to others, states in the Principia that he ranks Wren together with Wallis and Huygens as the leading mathematicians of the day.[6] He was the first to resolve Kepler’s Problem on cutting a semicircle in a given ratio by a line through a given point on its diameter. This problem had a basis in astronomy for it had arisen in Kepler’s work on elliptical orbits. Kepler reduced finding the mean motion of a planet to that of cutting an ellipse in a given ratio with a line through a focus. In addition to solving Kepler’s Problem, Wren independently proved Kepler’s third law and, as we noted above, formulated the inverse-square law of gravitational attraction.[6] 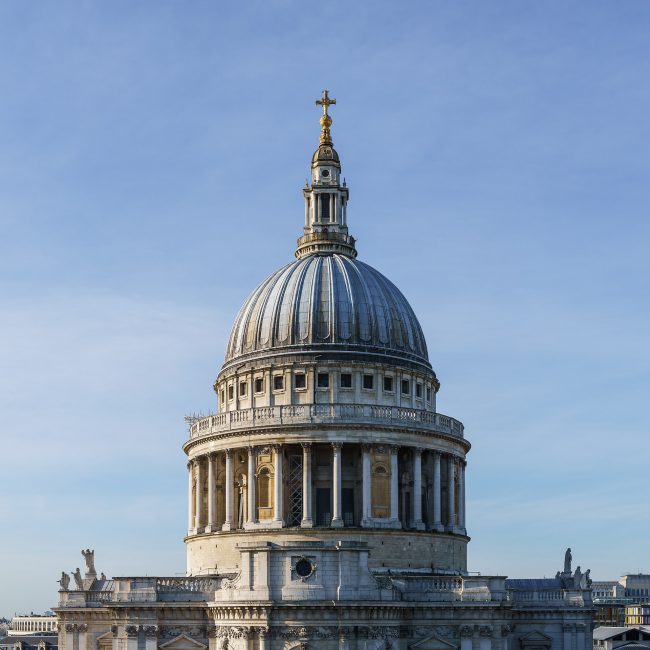 Wren’s interest in architecture developed from his study of physics and engineering. In 1663 he designed the chapel at Pembroke College, Cambridge, commissioned by his uncle the Bishop of Ely. In 1664 and 1665, Wren was commissioned to design the Sheldonian Theatre in Oxford and a chapel for Pembroke College, Cambridge and from then on, architecture was his main focus. In 1665, Wren visited Paris, where he was strongly influenced by French and Italian baroque styles.[4] Returning from Paris, he made his first design for St Paul’s Cathedral.[5] A week later, however, the Great Fire of London destroyed two-thirds of the city. Wren submitted his plans for rebuilding the city to King Charles II, although they were never adopted. With his appointment as King’s Surveyor of Works in 1669, he had a presence in the general process of rebuilding the city, but was not directly involved with the rebuilding of houses or companies’ halls. Wren was personally responsible for the rebuilding of 51 churches; however, it is not necessarily true to say that each of them represented his own fully developed design.[5] In 1668 building work began on Wren’s designs for the Emmanuel College Chapel, Cambridge and the Garden Quadrangle, Trinity College, Oxford.[6]

In 1675, the year in which Wren’s plans for St Paul’s were accepted, he received a commission from Charles II to build a Royal Observatory for Flamsteed who had been appointed as Astronomer Royal in that year. Wren was largely instrumental in arranging for the (unauthorized) publication of Flamsteed’s His toria coelestis Britannica (1712).

In 1718 Wren was superseded as surveyor of the royal works, after more than fifty years of active and laborious service to the crown and the public. He then retired to Hampton Court, where he spent the last five years of his life. On 25 February 1723, Sir Christopher Wren died, aged 90.