You are here: Home › biology › George Combe and the Phrenological Movement 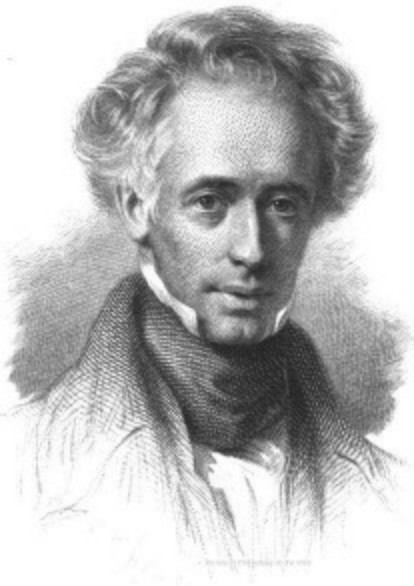 On October 21, 1788, Scottish lawyer and the leader of the phrenological movement George Combe was born. Combe founded the Edinburgh Phrenological Society in 1820 and was the author of the highly influential The Constitution of Man (1828).

George Combe was born in Edinburgh, Scotland, in a large family with thirteen surviving children to George Combe, a prosperous brewer in the city. After attending the High School of Edinburgh and the University of Edinburgh (1802-1804), Combe was apprenticed as a clerk to Writers to the Signet, a lawyer’s office in 1804. George’s other brothers became brewers, tanners, a sailor, and a baker. Only his younger brother Andrew followed George in a more ambitious career; Andrew became a physician. In 1812, he began his own practice.[1] Also in 1812 George Combe obtained his commission as a writer to the signet, and soon afterward that of notary public. He was eminently successful as a lawyer, and his shrewdness and conscientiousness in dealing with his clients obtained him a large practice.[2]

With increased social status, Combe began to think of the education and learning appropriate for a gentleman. He began to read current literature such as the Edinburgh Review and authors such as Adam Smith, Thomas Malthus, and Thomas Reid. In 1815, the Edinburgh Review contained an article on the system of “craniology” of Franz Joseph Gall and Johann Gaspar Spurzheim, which was denounced as “a piece of thorough quackery from beginning to end.” [5] When Spurzheim came to Edinburgh in 1816, Combe was invited to a friend’s house where he watched Spurzheim dissect a human brain. Impressed by this demonstration, he attended the second series of Spurzheim’s lectures. Investigating the subject for himself, he became satisfied that the fundamental principles of phrenology were true — namely “that the brain is the organ of mind; that the brain is an aggregate of several parts, each subserving a distinct mental faculty; and that the size of the cerebral organ is, caeteris paribus, an index of power or energy of function.”

A Capacity in Phrenology

In 1819 Combe published Essays on Phrenology, or an Inquiry into the System of Gall and Spurzheim, which was subsequently developed into his System of Phrenology (1824).[2] In 1820, Combe helped to found the Phrenological Society of Edinburgh, which in 1823 began to publish a Phrenological Journal. Through his lectures and writings, Combe attracted public attention to phrenology on Continental Europe and in the United States, as well as in his native United Kingdom. Combe began to lecture at Edinburgh in 1822. He took private tuition in elocution; and contemporaries described him as clever and opinionated.

Combe’s discussions had an air of confidentiality and rather theatrical urgency. Converts came in, new societies sprang up, and controversies began. A second edition of the Elements, 1825, was attacked by Francis Jeffrey in the Edinburgh Review for September 1825. Combe replied in a pamphlet and in the journal. Sir William Hamilton delivered addresses to the Royal Society of Edinburgh in 1826 and 1827 attacking the phrenologists. A sharp controversy followed, including challenges to public disputes and mutual charges of misrepresentation, in which Spurzheim took part. His most important work, The Constitution of Man (1828), was designed to show that all the laws of nature were in harmony with one another, and that man could best fulfill God’s will and attain the greatest happiness by discovering those laws and obeying them.

In 1838 Combe visited the United States and studied the treatment of criminals there. He initiated a programme of public education about chemistry, physiology, history and moral philosophy.

An Advocate for Public Education

Combe sought to improve the provision of public education and he advocated a national system of non-sectarian education. He helped set up a school in Edinburgh run on the principles of William Ellis, and did some teaching there himself on phrenology and physiology. Combe was a significant figure in his view that the state should be involved with the educational system. Combe was seriously concerned about prison reform; and, with the assistance of William A. F. Browne, he opened a debate about the introduction of the humane treatment of psychiatric patients in publicly funded asylums. The commercial crisis of 1855 elicited his remarkable pamphlet on The Currency Question (1858). The culmination of the religious thought and experience of his life is contained in his work On the Relation between Science and Religion, first publicly issued in 1857.

In 1842, Combe delivered a course of twenty-two lectures on phrenology in the Ruprecht Karl University of Heidelberg, and he travelled much in Europe, inquiring into the management of schools, prisons and asylums.