You are here: Home › astronomy › David Rittenhouse and the Transit of Venus 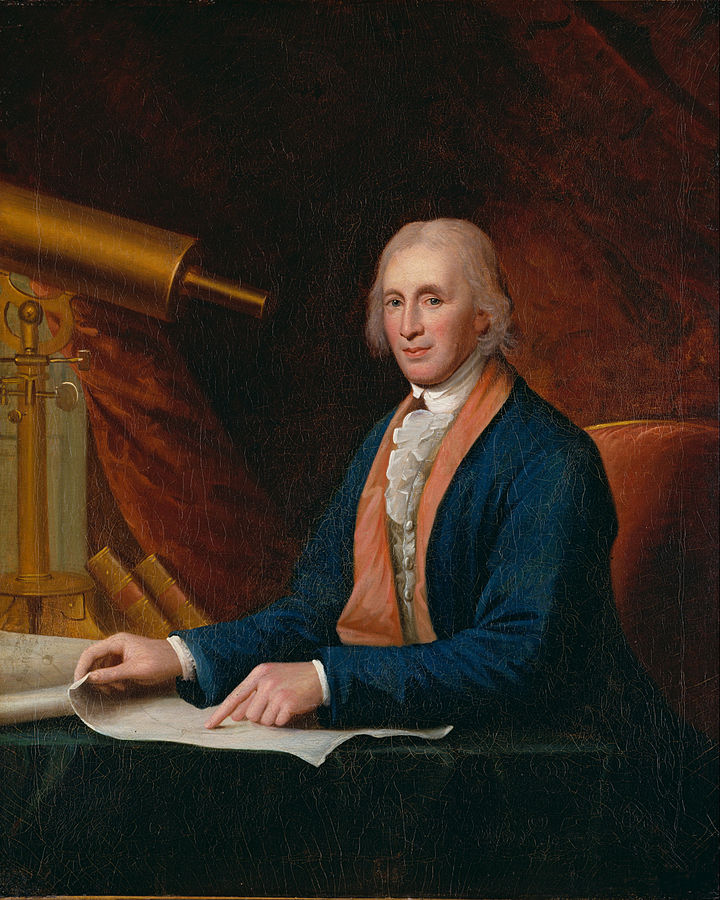 On April 8, 1732, American astronomer David Rittenhouse was born. He was an early observer of the atmosphere of Venus. For observations for the transit of Venus on 3 June 1769, he constructed a high precision pendulum clock, an astronomical quadrant, an equal altitude instrument, and an astronomical transit. Besides being an astronomer, he was also inventor, clockmaker, mathematician, surveyor, scientific instrument craftsman and public official as first director of the United States Mint.

“The direct tendency of (Astronomy) is to dilate the heart with universal benevolence, and to enlarge its views.”
– David Rittenhouse, from an Oration delivered February 24, 1775, before The American Philiosophical Society held at Philiadelphia

The transit of Venus already was subject of our blog posts twice (Recent Venus Transit in 2012 [3] and astronomer Jeremiah Horrocks [4]), and here we go for a third time. This time, American Astronomer David Rittenhouse stands in the focus of our post. Rittenhouse was born to the farmer Matthias Rittenhouse and Elizabeth Williams, in a small village within Philadelphia called Rittenhousetown, located near Germantown, along the stream Paper Mill Run, which is a tiny tributary of the Wissahickon Creek. His grandfather, William Rittenhouse, had built the first paper mill in the British colonies in Germantown in 1690. Already at a young age, Rittenhouse showed a high level of intelligence by creating a working scale model of his grandfather’s paper mill. Rittenhouse never went to elementary school and was completely self-educated from books, which he had inherited from his uncle together with a set of carpentry tools. He showed great ability in science and mathematics and began a career as an inventor.

At the age of 13, he had already mastered Isaac Newton’s laws of motion and gravity. At age 19, he started a scientific instrument shop at his father’s farm in what is now East Norriton Township, Pennsylvania. Rittenhouse lived through a difficult period with much of the fighting during the French and Indian War from 1754 to 1763 taking place in Pennsylvania.[1] Despite the limitations of his environment, Rittenhouse eventually developed a remarkable capability for theoretical and observational astronomy. His skill with instruments, particularly clocks that he produced and sold in his little shop, led him to construct also mathematical instruments, such as two scale models of the solar system for Rutgers University in New Jersey. In return for the gift, the college gave him a scholarship to attend the college enabling him to obtain a degree in philosophy. He also successfully experimented with the expansion of steel and wood for the development of a compensated pendulum of his own design for regulating his clocks with greater accuracy.[2] 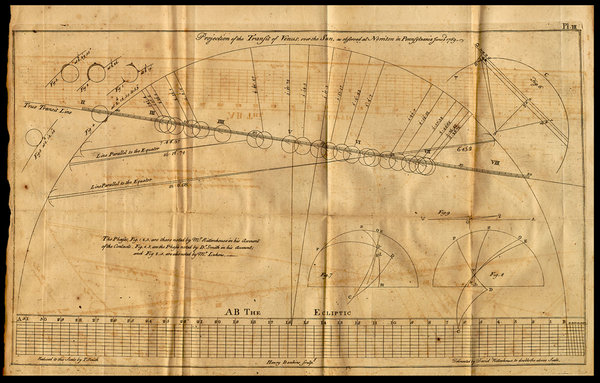 In 1768, Rittenhouse was elected to the American Philosophical Society and, based on calculations which he made, the Society made plans to observe the transit of Venus which was calculated to take place in 1769. The plans consisted of setting up observatories on three sites from which observations would be made. Rittenhouse built one of these observatories at his home as well as constructing most of the astronomical instruments to be used in it. It is believed that he made the first telescope in the United States as one of these instruments.[1] The transit of Venus occurred on 3 June 1769. Rittenhouse’s great excitement at observing the infrequently occurring transit of Venus resulted in his fainting during the observation due to illness during his extensive and most accurate preparations. Lying on his back beneath the telescope, trained at the afternoon sun, he regained consciousness after a few minutes and continued his observations.

Between 1756 and 1785 Rittenhouse made a variety of astronomical instruments, which were highly prized, including transit and equal altitude instruments, zenith sectors, and telescopes. Particularly interesting was a collimating telescope he invented for the purpose of adjusting instruments in the meridian when intervening structures prevented visibility of a distant mark. He was also the first in the United States to utilize spider silk as the filament for cross hairs in the telescope’s eyepiece.[2]

Survey of the Delaware-Pennsylvania Border

Rittenhouse also contributed to the United States as a surveyor. His 1763–1764 survey of the Delaware-Pennsylvania border was so precise and well-documented that it was incorporated without modification into Charles Mason and Jeremiah Dixon’s survey of the Pennsylvania-Maryland border. Later Rittenhouse also helped establish the boundaries of several other states and commonwealths both before and after the Independence, including the boundaries between New Jersey, New York and Pennsylvania. In 1784 Rittenhouse, surveyor Andrew Ellicott and their crew completed the unfinished survey of the Mason–Dixon line to the southwest corner of Pennsylvania, 5 degrees of longitude from the Delaware River.

During the Revolutionary War, Rittenhouse served as an engineer with the Committee of Safety in 1775 becoming its president in 1777. He supervised the local casting of cannon and the manufacture of saltpeter, and he arranged for the substitution of iron for lead weights in clocks throughout the city to provide lead for making ammunition. He selected sites for a gunpowder mill and a magazine for military stores, supervised production of chains for protecting the Philadelphia harbor, and experimented with rifling of cannon and musket balls. During this period he was also a member of the Pennsylvania General Assembly and of the state constitutional convention of 1776.[2]

In 1792, George Washington made him the first director of the U.S. Mint and in 1795 Rittenhouse was elected a fellow of the Royal Society of London. Rittenhouse resigned from the Mint on June 30, 1795, due to poor health. He passed away on June 26, 1796, in Philadelphia.

Chasing Venus lecture series, Part 1: The First Observation of a Transit of Venus, [9]