You are here: Home › astronomy › John Tebbutt and the Great Comet of 1861 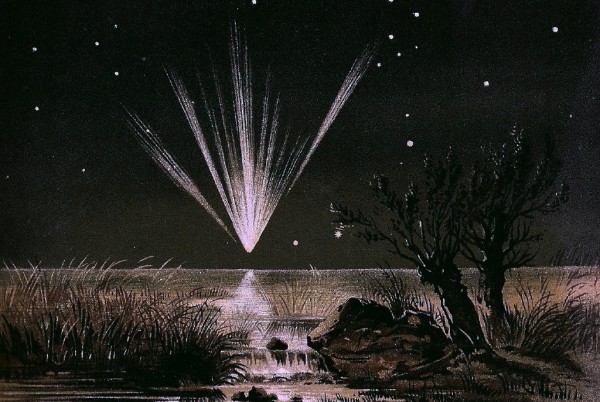 On May 13, 1861, Australian astronomer John Tebbutt discovered C/1861 J1, the Great Comet of 1861. C/1861 J1 is a long-period comet that was visible to the naked eye for approximately 3 months. It was categorized as a Great Comet, one of the eight greatest comets of the 19th century.

John Tebbutt Tebbutt was born at Windsor, New South Wales, the only son of John Tebbutt, then a prosperous store keeper. His grandfather, John Tebbutt, a Middlesex man, married Ann Halfpenny in 1788, and emigrated to New South Wales with his wife and three children in 1801. He was first educated at the Church of England parish school and later at a private school. After his retirement, his father purchased some land east of Windsor. This later also became the site of John Tebbutt’s observatory. In 1853, at the age of nineteen, Tebbutt purchased a sextant and a copy of Norie’s Epitome of Navigation. Further, he had also the use of a “grandfather” clock, an “ordinary marine” telescope, and a celestial atlas. With this equipment he set out to explore the heavens. He verified the Sun’s rotation by making sketches of the spots, observed the comet of 1853 by aligning it with various stars, and calculated the solar eclipse of 1857, which, however, was unfortunately hidden by clouds. [7] 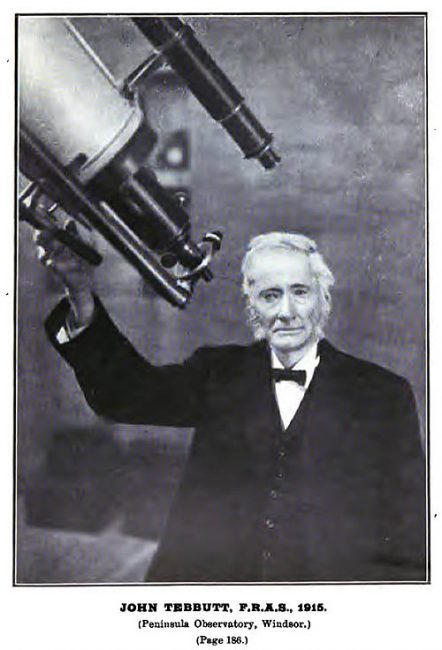 On May 13, 1861, Tebutt discovered the 1861 comet. The young astronomer was acknowledged as the first discoverer of C/1861 J1 and the first computer of its approximate orbit. The long-period comet was visible to the naked eye for approximately 3 months. It was magnitude 4, visible to the naked eye, and a month before perihelion (June 11). Before news of the discovery could reach the northern hemisphere, the comet itself appeared in northern skies. The first person in England to see it may have been William C. Burder, of Clifton, Bristol, who dashed off a letter to the Times on Sunday, June 30th.

“Sir – At 2.40 a.m. today I detected a brilliant comet near the north-west horizon. It was visible till 3.20 a.m….it appeared as bright as Capella and was favourably situated for the comparison. It was surrounded by a nebulous haze, but I saw no tail…The daylight put out the both the comet and Capella nearly at the same time; your readers will therefore consider this a proof that it is a brilliant object.“[5]

It was categorized as a Great Comet, one of the eight greatest comets of the 19th century, according to Donald Yeomans. After the first calculation of a parabolic orbit by Tebbutt shortly after its discovery, numerous other attempts to determine the orbital elements of the comet, among others by Maurice Loewy, John Russell Hind, Asaph Hall and Horace Parnell Tuttle, were soon followed by the availability of further observation data.[6] These determined parabolic orbits, in one case also a hyperbolic orbit. In September 1861, Arthur von Auwers was the first to determine the true orbit of the comet as elliptical.

The Shortest Orbit Time of all Great Comets

The comet made its closest approach to the Earth at a distance of 0.1326 AU. At that time, it was estimated to be between magnitude 0 and −2 with a tail of over 90 degrees. C/1861 J1 could even cast shadows at night, and the famous comet observer J. F. Julius Schmidt watched in awe as the great comet C/1861 J1 cast shadows on the walls of the Athens Observatory. When the comet had already disappeared again, orbital elements could be calculated that covered the entire time of its visibility. In 1880 Heinrich Kreutz finally determined orbit parameters of the comet from 1159 observation data over a period of 339 days, which indicate an orbital period of 409 years. The comet thus has the shortest orbit time of all Great Comets after Halley’s comet. For the comet an elliptical orbit could be determined, which is inclined by almost 90° against the ecliptic. The orbit of the comet thus stands almost vertically on the orbital plane of the earth. In the nearest point of the orbit (perihelion), which the comet passed on 12 June 1861, it was in the area between the orbits of Venus and Earth with a solar distance of about 123.0 million km.

In 1864 Tebbutt built a small observatory close to his father’s residence on his own. Tebbutt installed his instruments consisting of his 3¼-inch telescope, a two-inch transit instrument, and an eight-day half-seconds box-chronometer. Four years later, he published his meteorological observations titled ‘Meteorological Observations made at the Private Observatory of John Tebbutt,Jnr.‘ For the next 30 years, John Tebbutt continued publishing his records and published a series of papers in the Monthly Notices of the Royal Astronomical Society of London, in the Astronomical Register, London, and in the Journal and Proceedings of the Royal Society of New South Wales. In 1881, Tebbutt discovered C/1881 K1, another great comet. He published his work in 1887 History and Description of Mr Tebbutt’s Observatory, and followed this with a yearly Report for about 15 years. John Tebbutt was elected first president of a branch of the British Astronomical Association which was established at Sydney. In 1904, Tebbutt decided to retire from systematic astronomical work at the age of seventy.[7]

John Tebbutt died at Windsor on 29 November 1916. He was commemorated on the reverse side of the Australian one hundred-dollar note.

Comets: Visitors from the Frozen Edge of the Solar System – Professor Carolin Crawford, [8]