You are here: Home › computer science › Joseph Weizenbaum and his famous Eliza 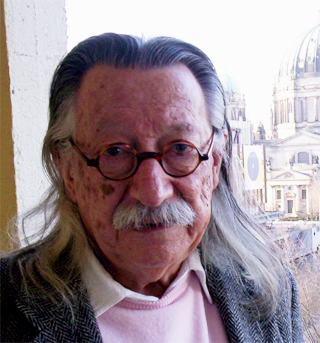 On January 8, 1923, computer scientist Joseph Weizenbaum, a pioneer in natural language processing and artificial intelligence, who later became one of artificial intelligence’s leading critics, was born. In 1966 he published a simple program named Eliza, which involved its users in a conversation that bore a striking resemblance to one with a psychologist.

Joseph Weizenbaum was born in Berlin the son of master furrier Jechiel Weizenbaum and his wife Henriette on January 8, 1923. He was able to escape Nazi Germany in January 1936, emigrating with his family to the United States, where he started studying mathematics at the Wayne State University in Detroit in 1941. However, his studies were interrupted by the war, during which he served in the military at the meteorological service of the Air Force. In 1946 Weizenbaum returned to earn his M.S. in Mathematics in 1950. Around 1952 he worked on analog computers, and helped create a digital computer for Wayne State University. He joined a General Electric Co. team in 1955 that designed and built the first computer system dedicated to banking operations. In 1956 he worked for General Electric on ERMA, a computer system that introduced the use of the magnetically encoded fonts imprinted on the bottom border of checks, allowing automated check processing via Magnetic Ink Character Recognition (MICR).In 1964 he took a position at MIT as an associate professor and in 1970 he became Full professor of computer science.

It was at MIT in 1966, when he published the Eliza program. As a computer scientist you simply have to know Eliza. I stumbled accross this unique piece of software in the late 1980s and – believe it or not – people really talked with this computer program as if it was a real person. However, Joseph Weizenbaum wrote a simple program that was able to pose a few standard questions in the way a psychiatrist does and included some templates and patterns (which can easily be modeled via a Finite State Automaton or Finite State Transducer) used to reflect the answers of the user in a simple way. Weizenbaum adopted the use of open-ended questions that is used to encourage patients to communicate more effectively with therapists. Thereby, Eliza was able to mock a real conversation and no wonder that its creator named it Eliza after Eliza Doolittle, a working-class character in George Bernard Shaw‘s play Pygmalion.[5] According to Weizenbaum, ELIZA’s ability was to be “incrementally improved” by various users made it similar to Eliza Doolittle, since Eliza Doolittle was taught to speak with an upper-class accent in Shaw’s play. However, unlike in Shaw’s play, ELIZA is incapable of learning new patterns of speech or new words through interaction alone. Edits must be made directly to ELIZA’s active script in order to change the manner by which the program operates. 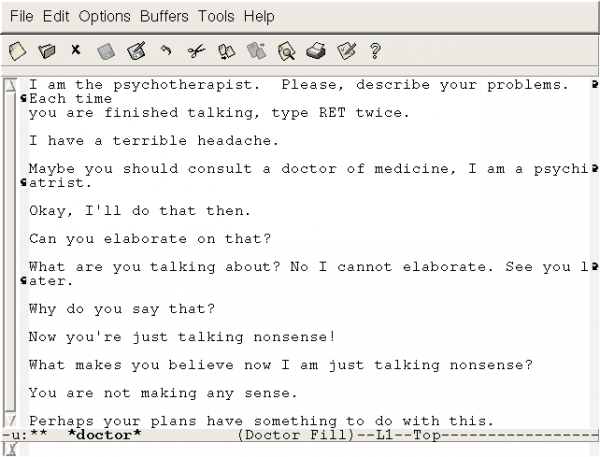 Example of an ELIZA dialogue

However, in 1966, interactive computing (via a teletype) was new. It was 15 years before the personal computer became familiar to the general public, and three decades before most people encountered attempts at natural language processing in Internet services.

“Most of the damage that the computer could potentially cause depends less on what the computer actually can or cannot do than on the qualities that the public attributes to the computer.”
– Joseph Weizenbaum in Die ZEIT, 03/1972, p. 43

Actually, Weizenbaum was shocked, when he realized, how people reacted to Eliza, opening up their deepest inner thoughts to a (stupid) machine. The experience prompted him to think philosophically about the implications of artificial intelligence and, later, to become a critic of it. In his 1976 book “Computer Power and Human Reason: From Judgment to Calculation,” Weizenbaum suggested it could be both dangerous and immoral to assume computers could eventually take over any roll, given enough processing power and the right programming. “No other organism, and certainly no computer, can be made to confront genuine human problems in human terms,” he wrote. According to Weizenbaum, there is a crucial distinction between deciding and choosing. Deciding is a computational activity, something that can ultimately be programmed. Choice, however, is the product of judgment, not calculation. It is the capacity to choose that ultimately makes us human. Comprehensive human judgment is able to include non-mathematical factors, such as emotions.

In 1996, Weizenbaum moved back to Berlin and lived in the vicinity of his childhood neighborhood. Besides his work at MIT, he held academic appointments at many schools, including Harvard University, Stanford University and the University of Bremen, among others. Berlin’s Humboldt University awarded him an honorary doctorate on his 80th birthday in 2003. Joseph Weizenbaum passed away on March 5, 2008, at age 85.

“The Internet is a big dung heap where you can find little treasures and pearls.”
– Joseph Weizenbaum in a lecture in Hamburg on 2 May 2001

Eliza also was the namesake for the “ELIZA effect“, which, in computer science, is the tendency to unconsciously assume computer behaviors are analogous to human behaviors, that is anthropomorphisation. In its specific form, the ELIZA effect refers only to “the susceptibility of people to read far more understanding than is warranted into strings of symbols — especially words — strung together by computers“. Though designed strictly as a mechanism to support “natural language conversation” with a computer, ELIZA was found to be surprisingly successful in eliciting emotional responses from users who, in the course of interacting with the program, began to ascribe understanding and motivation to the program’s output.  As Weizenbaum later wrote, “I had not realized … that extremely short exposures to a relatively simple computer program could induce powerful delusional thinking in quite normal people.”

You can learn more about Joseph Weizenbaum in a compilation of highlights of his talk at MEDICHI 2007.