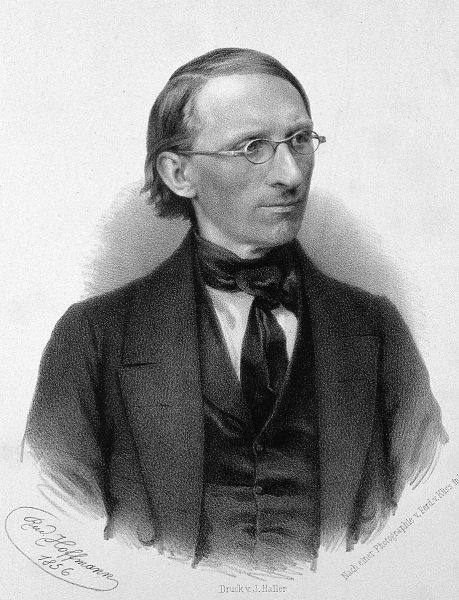 On December 29, 1816, German physician and physiologist Carl Friedrich Wilhelm Ludwig was born. Ludwig was one of the creators of modern physiology. He applied the experimental approach of chemistry and physics to explain the way the body functions. Ludwig investigated the structure of the kidneys and cardiac activity.

Carl Ludwig was born in Witzenhausen an der Werra, near Kassel, Germany. His father was the rent master in Witzenhausen, later promoted to the head rent master in Hanau, Friedrich Ludwig (1781-1843), his mother was Christiane Ludwig, née Nagel. After the family moved to Hanau, he attended the Hohe Landesschule, a humanistic grammar school, there from 1825 and passed the Matura there in 1834. Ludwig studied medicine in Marburg from 1834. During his first student days in Marburg – from 1835 he was a member of the Corps Guestphalia and in 1839 one of the founders of the Corps Hasso-Nassovia, of which he became an honorary member in 1840 – he was relieved of the “exuberance” of his cheerful nature; it was not politics that brought him into conflict with the disciplinary authorities, but simply a feeling of independence from any coercion. In addition to his studies, he participated in fencing exercises, of which a “crack” on his upper lip testified.

In Marburg he was relegated at the end of the winter semester 1835/36, because he stood up for a politically persecuted student. From 1836 to 1838 he studied in Erlangen. In the following silence of the surgical school in Bamberg, where he spent the first time of his exile, he thought of something better; 1839 returned to Marburg, he devoted himself to the study of his science. In 1839 he finally received his doctorate in Marburg. In 1842 he habilitated in Marburg with his paper De viribus physicis secretionem urinae adjuvantibus (“Contributions to the study of the mechanism of urinary excretion“). With this work, he opposed the then still prevailing notion of a vis vitalis and postulated that urine originated primarily from the driving force of blood pressure as filtrate of the glomeruli and that its final composition was obtained by absorption processes along the renal tubules. The active secretion processes that contribute to the formation of the final urine remained unknown to him.

The Invention of the Kymograph

Through Franz Ludwig Fick, the older brother of Adolf Fick, he got a job as 2nd prosector at the Anatomical Institute of the University of Marburg. After Franz Ludwig Fick had taken over this institute, Carl Ludwig became 1st Prosector and 1846 Extraordinarius for Comparative Anatomy. From 1846 Ludwig also worked on the development of the kymograph, an important measuring instrument for investigations in the field of circulatory physiology and phonetics. The curves recorded by measurements of carotid and pleural pressure in dogs and horses showed, among other things, that systole and exhalation increase carotid pressure, while diastole and inhalation reduce it. Through this invention Ludwig became known in broad scientific circles.

In 1848 he also got into the whirlpool of the political movement; he had been elected with Gildemeister, Knies and Robert Wilhelm Bunsen [2] to the committee of the liberal Vaterlandsverein founded by Heinrich von Sybel in Marburg and even took over the editorial office of the “Neue Verfassungsfreunde” in spring 1848. Even though Marburg’s liberalism was resolutely averse to all radical behavior, in the eyes of the collapsing reaction it was nevertheless suspected of being democratic, and in 1849 Ludwig therefore welcomed the call to the University of Zurich as a full professor of anatomy and physiology as a way out into the open.

In 1855 he was appointed full professor of physiology and zoology at the Medical-Surgical Military Academy (Josephinum) in Vienna. In Vienna Ernst Brücke worked at the Physiological Institute of the University since 1849. During his 10 years at Josephinum, Carl Ludwig invented the blood gas pump, elucidated the basic processes involved in the exchange of respiratory gases, researched lymph formation and movement, and discovered the medullary vasomotor centre. During this time, he already had many foreign students, especially from Russia. In addition to his activities in physiology, he was also active in physical chemistry. In 1856 he published the first discovery of thermodiffusion, later named after him and Charles Soret (1854-1904).

Ludwig became friends with Hermann Ludwig Ferdinand von Helmholtz, Ernst Wilhelm von Brücke, and Emil du Bois-Reymond. They rejected the assumption that the phenomena of living animals depend on special biological laws and vital forces different from those that operate in the domain of inorganic nature. He sought to explain them by reference to the same laws as are applicable in the case of physical and chemical phenomena.

On 1 May 1865 Ludwig was appointed to the University of Leipzig as successor to Ernst Heinrich Weber, who was entrusted with anatomy, and became the first professor of physiology there. Here he worked for 30 years, until his death in 1895. There is indeed scarcely any branch of physiology, except the physiology of the senses, to which Ludwig did not make important contributions. He was also a great power as a teacher and the founder of a school. Under him the Physiological Institute at Leipzig became an organized center of physiological research, whence issued a steady stream of original work; and though the papers containing the results usually bore the name of his pupils only, every investigation was inspired by him and carried out under his personal direction. Thus his pupils gained a practical acquaintance with his methods and ways of thought, and, coming from all parts of Europe, they returned to their own countries to spread and extend his doctrines.