You are here: Home › chemistry › Carl Remigius Fresenius and the Analytical Chemistry 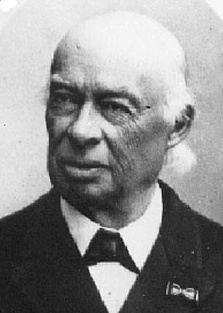 On December 28, 1818, German chemist Carl Remigius Fresenius was born. Fresenius is known for his studies in analytical chemistry. He devised a method for systematic identification and separation of individual metal and non-metal ions, selecting the most suitable reactions from the many that were known.

Carl Remigius Fresenius was born in Frankfurt am Main, Germany, the son of Jakob Samuel Heinrich Fresenius, a lawyer with a doctorate in law. After attending school at the Bender Institute in Weinheim and the Lessing Grammar School in Frankfurt, he began an apprenticeship at the Steinsche Apotheke in Frankfurt in 1836. During his apprenticeship he attended lectures by Rudolf Böttger on chemistry and physics at the Physical Society. Due to his great interest in analytical chemistry, he set up his own small laboratory in his father’s garden house.

Already in the second semester of his chemistry studies at the University of Bonn in 1841, he wrote his fundamental work Anleitung zur quantitativen chemischen Analyse (Guide to quantitative chemical analysis), which was published in 17 editions. After his decision to devote himself entirely to chemistry, he moved to the then Centre for Chemistry in Giessen to join Justus Liebig,[4] whose private assistant he was from April 1842 to autumn 1845. The second edition of the Anleitung zur qualitativen chemischen Analyse contained a laudatory preface by Liebig, who also introduced it as a textbook in his laboratory. In recognition of this work, the philosophical faculty awarded him a doctorate in 1842. In 1843 Fresenius habilitated as a private lecturer with a thesis on the safe quantitative determination of arsenic, until in September 1845 he was appointed Professor of Chemistry, Physics and Technology at the Ducal-Nassau Agricultural Institute on the Geisberg farm near Wiesbaden. He became the first director of the chemical laboratory which he induced the Nassau government to establish at that place. The laboratory increased in size and reputation and during the 1860s, a school of pharmacy as well as an agricultural research laboratory were added.

In the spring of 1848, following the example of Justus von Liebig, he opened his chemical laboratory in a house he had bought, which was later extended by several departments and turned into a technical academy. At this chemical laboratory Fresenius Wiesbaden chemistry was taught, from 1862 also pharmacy at the Pharmaceutische Lehranstalt and from 1868 agricultural chemistry and ecology. From 1862, Fresenius was editor of the Zeitschrift für Analytische Chemie and edited it until his death. The journal produced 371 volumes and all but one of them were edited or co-edited by a member of the Fresenius family. From 1862 to 2001, the Fresenius’ Journal of Analytical Chemistry as it was known came to an end when it became Analytical and Bioanalytical Chemistry, which is still running as of 2014.