You are here: Home › archeology › Michael Ventris and the Minoan Linear B

This clay tabled, dated to 1450-1375 BC is Minoan and was found at Knossos by Arthur Evans. It records quantities of oil apparently offered to various deities.

On July 12, 1922, English architect and linguist Michael Ventris was born. Along with John Chadwick and Alice Kober, Ventris deciphered Linear B, a previously unknown ancient script discovered at Knossos by Arthur Evans. He showed that the Minoan Linear B script was a very early form of Greek, the oldest known examples.

Michael Ventris – Learning a Language in only Weeks

Michael Ventris was born as the only child into a traditional army family to Edward Francis Vereker Ventris, a Lieutenant Colonel in the Indian Army, and Anna Dorothea Janasz, the daughter of a wealthy immigrant landholder from Poland. As a child, Michael Ventris had chronic bronchial asthma. Thus, the family resided mainly in Switzerland for eight years. Ventris started school in Gstaad, where classes were taught only in French and German, in which he was soon reasonably fluent in. Ventris had the amazing facility of learning a language within a matter of weeks, which led to his acquisition of roughly a dozen languages.

From 1931 to 1935 Michael attended Bickley Hill School in Stowe, England, where he learned some Latin and classical Greek. Already in Stowe, Michael Ventris became obsessed with the decipherment of the Minoan Linear B script. When archaeologist Arthur Evans began excavating Knōssos,[4] an ancient city on the island of Crete, he so he uncovered a great many clay tablets inscribed with an unknown script. The older ones were named Linear A, but he bulk were of more recent vintage, and were dubbed Linear B. Evans spent the next several decades trying to decipher both, but without success. Evans was convinced that the Minoans had their own language unrelated to ancient Greek, and his attempts to decode it proceeded from that assumption.[3] 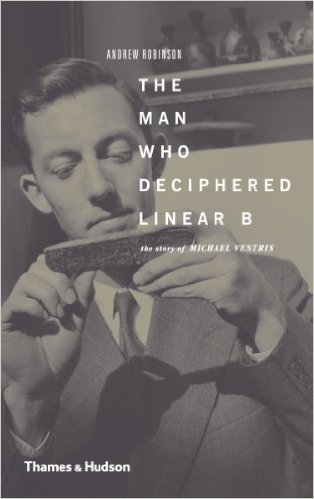 Did you say the tablets haven’t been deciphered, Sir?

In 1936, Evans hosted an exhibition of Cretan archaeology at Burlington House in London, home of the Royal Academy. Ventris went with a school group to the exhibition celebrating the 50th anniversary of the British School at Athens. Sir Arthur Evans, then 85 years old, happened to be present in the gallery and showed the boys his finds from Knossos, including the Linear B documents.[4] His teacher remembers the 14 years old Ventris asking: “Did you say the tablets haven’t been deciphered, Sir?” Thus began a life-long fascination with “the Minoan problem”.[1]. Ventris wrote to Evans — who kindly wrote back — and soon published his first article on the subject, arguing that the language of Linear B was likely to be related to Etruscan, a pre-Roman language of Italy: this came out in the American Journal of Archaeology in 1940, when Ventris was just 18.[1]

Ventris‘ father died in 1938 and caused by the German invasion in Poland in 1939, his mother lost her income from the family estates, finally leading to clinical depression and an overdose of barbiturates. Ventris enrolled at the Architectural Association School of Architecture, but did not complete his architecture studies, being conscripted in 1942 to the Royal Air Force as a navigator rather than pilot.

After the war he worked briefly in Sweden, learning enough Swedish to communicate with scholars in it, and subsequently completed his architectural education with honors in 1948. He settled down working as an architect to design schools for the Ministry of Education. In 1950 Ventris sent a questionnaire to Linear B scholars around the world, asking their opinions on the current state of research into the script; he then wrote up their answers, together with his own thoughts, and circulated this as the “Mid-Century Report” on Linear B, which he intended to be his last work on the subject. But the problem would not leave him alone, and he soon gave up his architectural job to work full-time on Linear B.[1]

The Earliest Known Form of Greek

Until a very late stage in his research, he remained convinced that the language behind Linear B was related to Etruscan, just as he had first argued in 1940. But over the next few months, as the code began to “break”, it became increasingly clear that, to his astonishment, the Linear B documents were, after all, written in Greek. The method by which he achieved success was essentially that of statistical analysis, aided by stray hints from the analysis of various arrangements of syllabic signs.[2] No one, not even Ventris, suspected that it is the earliest known form of Greek. Joined shortly thereafter by the Cambridge linguist John Chadwick, they assembled dramatic evidence supporting Ventris’ theory. In 1953 they published their historic paper, “Evidence for Greek Dialect in the Mycenaean Archives.”[2]

Ventris was awarded an OBE in 1955 for “services to Mycenaean paleography“. Tragically, Michael Ventris died in a car accident on 6 September 1956, aged only 34.

In 2019, it was reported that a team led by MIT’s Jiaming Luo had deciphered linear script B using machine learning alone, which may also open up new opportunities to decipher linear script A as well.[8]

The History of the Minoans and the Bronze Age Collapse | Dr. Louise Hitchcock, [9]