You are here: Home › literature › Honoré de Balzac and the Comédie Humaine 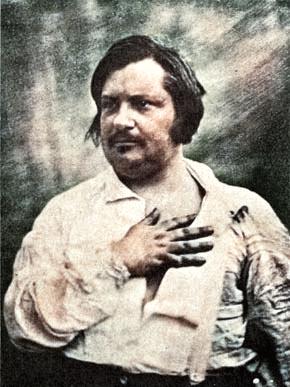 On May 20, 1799, French novelist and playwright Honoré de Balzac was born. He is best known for his his keen observation of detail and unfiltered representation of society, which is reflected in his opus magnum, the Comédie Humaine, sequence of short stories and novels, which presents a panorama of French life in the years after the 1815 fall of Napoleon Bonaparte, the period of the Restoration and the July Monarchy (1815–1848). Overall, La Comédie Humaine was supposed to comprise 137 novels and short stories, of which Balzac could only finish 91volumes during lifetime, which makes Balzac a rather prolific writer, considering that he already died at age 50. By reusing already introduced characters in his stories, he created a connective linking everything together to a series. His goal was to “depicting all society, sketching it in the immensity of its turmoil“.

Writing against his Father’s Wishes

Honoré Balzac was born on May 20, 1799, as the second of five children to Bernard-François Balzac, Secretary to the King’s Council and a Freemason, and Anne-Charlotte-Laure Sallambier, who came from a family of haberdashers in Paris. She was eighteen at the time of the wedding, and Bernard-François fifty. His father, never called himself de Balzac and Honoré only assumed the noble particle after 1830. As an infant Balzac was sent to a wet-nurse followed by his younger sister the next year. When both siblings returned home, they were kept at a frigid distance by their parents, which affected the author-to-be significantly. From 1807 to 1813 Balzac visited boarding school at the collège des oratoriens de Vendôme in the Centre region of France. However, from sixteen years of age he left his native region to study in Paris. Honoré was placed as a clerk in an attorney’s office and enrolled at the Sorbonne where he studied civil and criminal law. But, against his father’s wishes he turned to a career in writing. As a journalist, Balzac wrote essays on various topics including politics which garnered much of his attention, while working on his short stories and novels. Extremely poor and living in a garret in Paris, he published under pseudonyms. These books were without literary merit, but he earned his living by them.

Giving up all Hopes to live a Prosperous Life

“It is easier to be a lover than a husband, for the same reason that it is more difficult to be witty every day, than to say bright things from time to time.”
— Honoré de Balzac, Physiology of Marriage (1829)

Searching for ways to make his fortune more rapidly, Balzac next entered a series of business ventures using borrowed funds. But, these commercial ventures were also failures, leaving him with very large debts. Finally, at age 29 he had given up all hopes to live a prosperous life, he published the first novel signed with his own name entitled Le Dernier Chouan, a historical novel. Since historical novels were the fashion, the book was well received. But real fame came to him two years later, when he published La Peau de chagrin, a fantasy that acts as an allegory of the conflict between the will to enjoy and the will to survive.

In 1832, Balzac conceived the idea for an enormous series of books that would paint a panoramic portrait of “all aspects of society.” When the idea struck, he raced to his sister’s apartment and proclaimed: “I am about to become a genius.” Although he originally called the series Etudes des Mœurs (Study of Mores), it eventually became known as La Comédie Humaine, and he included in it all the fiction that he had published in his lifetime under his own name. This was to be Balzac’s life work and his greatest achievement. 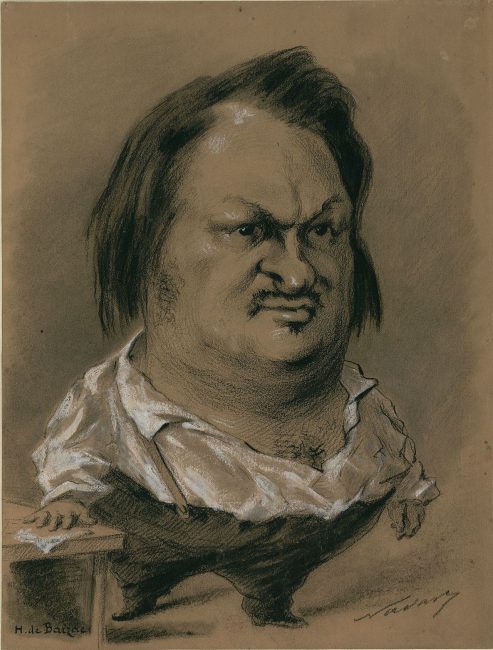 Balzac caricature by Nadar in 1850

Balzac counts as a representative of the 19th century realism movement. As a hard working writer, he worked on his writing continuously for long hours without sleep. His preferred method of working was to eat a light meal at five or six in the afternoon, then sleep until midnight. He then rose and wrote for many hours, fueled by innumerable cups of black coffee. His consumption of coffee is considered legendary. He would often work for fifteen hours or more at a stretch. He wrote numerous notes and revised his work obsessively. The characters he wrote about carried a realistic element in them, they neither were super heroes nor completely evil, they represented the everyday person. His characters also came from an array of social states and classes. His detailed description of the location of the story entrapped the reader making the story sound as real as possible. He wrote “The author firmly believes that details alone will henceforth determine the merit of works….“

Balzac influenced the writers of his time and beyond. Gustave Flaubert, Marcel Proust, and also Henry James were deeply influenced by the works of Balzac. He has been compared to Charles Dickens and critic W. H. Helm actually called one “the French Dickens” and the other “the English Balzac”. Also Karl Marx made ongoing references of Balzac in his seminal work “Das Kapital“. At age 50, only five months after his late wedding, on 18 August, 1850, Honoré de Balzac passed away. The funeral at the Cimetière du Père Lachaise in Paris was attended by “almost every writer in Paris.