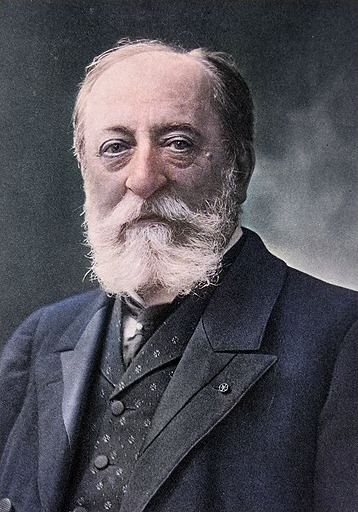 On October 9, 1835, French composer, organist, conductor, and pianist of the Romantic era Camille Saint-Saëns was born. He was something of an anomaly among French composers of the nineteenth century in that he wrote in virtually all genres, including opera, symphonies, concertos, songs, sacred and secular choral music, solo piano, and chamber music. Moreover, his interests also exceeded the musical genre as being an expert in mathematics and maintaining strong interests in the sciences — everything from archaeology to botany, but particularly astronomy.

“Nothing is more difficult than talking about music: if it is a prickly business for musicians, it is almost impossible for anyone else—the strongest, subtlest minds go astray.” – Camille Saint-Saëns (1899)

It was almost clear that Camille Saint-Saëns would become a child prodigy with a perfect pitch when he was about two years old. At the incredible age of 4, he managed to write his first composition and also in other subjects he achieved stunning outputs. For instance, Saint-Saëns was able to read and write at the age of three and knew the Latin language well only four years later. But by then, he already performed on various stages and received the best known piano lessons. He played Bach, Händel, Mozart, Beethoven and across Europe, people started talking about the brilliant child.  In 1854 he moved to the Église Saint-Merri, in 1858 to the Madeleine Church, but gave up this position in 1877 to devote himself to composition. From 1861 to 1865 he taught piano at the École Niedermeyer de Paris, where Gabriel Fauré was one of his students. In 1865 he wrote the opera Le Timbre d’Argent, which, like Etienne Marcel, was not very successful. In 1872 he composed the now almost unknown opera The Yellow Princess. 1868-1877 he wrote the opera Samson et Dalila, which was premiered in 1877 in Weimar. The French premiere took place in Rouen in 1890, and the opera was first performed in Paris in 1892.

In the following years, Saint-Saëns got to meet several celebrities as his reputation grew and one of those was Franz Liszt, whom he became good friends with.[4] Saint-Saëns was much more successful than his operas with his symphonic poems Le Rouet d’Omphale (1872), Phaeton (1873), Danse macabre (1875), in which he introduced the xylophone to symphonic music, and La Jeunesse d’Hercule (1877). The Oratorio de Noël op. 12, completed in 1858, has enjoyed great popularity in Germany for several years. In its lyrical-contemplative manner, underlined by the chamber-musical use of the orchestra, the simple choral score and the use of the harp, it is hardly comparable with Johann Sebastian Bach’s festive-baroque Christmas Oratorio. Nevertheless, it is increasingly being performed as an alternative in Christmas church music. In 1871, after the Franco-German War, he advocated French national music and founded the Société Nationale de Musique together with César Franck. In the following years he undertook numerous art journeys and worked not only as a composer and pianist, but also through essays on musical themes.

Saint-Saëns at the piano for his planned farewell concert in 1913, conducted by Pierre Monteux

In the 1880s he was regarded as the country’s greatest musician, was elected to the Academy of Fine Arts in 1881 and was made an officer of the Legion of Honour in 1884. In 1913 he received the Grand Cross of the Legion of Honour. As already mentioned, Saint-Saëns’ talents were ranged widely. He published several works on philosophy and astronomy and befriended numerous scientists, whom he held lively discussions with. His thoughts on geology, mathematics, botany, and of course philosophy and astronomy were welcomed by society and his circle of friends. In the last years of his life he travelled a lot to North Africa and America, still at the age of 80 he made a successful USA tour. He fought against the influences of German music on the French and especially the cult of Richard Wagner and Arnold Schönberg. At the age of 86 he played as a pianist at the Dieppe Casino for the 75th stage anniversary.

Carnival of the Animals

Nevertheless, his fame faded in France, where he was considered old-fashioned. Although he had advocated a progressive French symphony, his music remained rather conservative. A major exception was his late work Le Carnaval des Animaux (Carnival of the Animals) from 1886, which distinguished itself from contemporary music through its descriptive character. In 1908 he composed for the first time a special film score for the film The Murder of the Duke of Guise. Among his famous compositions is the Symphony No. 3 in C minor, the organ symphony, which has found worldwide acclaim and has the Dies irae as its basic theme. The significant Maestoso of the work inspired the duo Scott Fitzgerald and Yvonne Keeley to the Reggae adaptation If I Had Words, which became a charter success in 1978.

After his death in 1921, Saint-Saëns was remembered as a pioneer in music, who introduced the symphonic poem to France and mastered the works of Mozart and Bach. His works were known to be very hard to play and needed an expert and virtuoso to play them nearly as brilliant as he did. Even though he was known to be quite old-fashioned, it was Saint-Saëns, who approached French classicism inspired pieces that made him a pioneer of the neoclassicism.