You are here: Home › literature › Henry Fielding – the Father of the English Novel

Henry Fielding (1707-1754, frontispiece engraving for, The Works of Henry Fielding, published in 1762 and engraved by James Basire

On October 8, 1754, famous English novelist, journalist and dramatist Henry Fielding passed away. He is best known for his rich earthy humour and satirical prowess, and as the author of the novel Tom Jones. Henry Fielding influenced the main tradition of the English novel through the eighteenth century and the nineteenth century. One of his major contribution to the English novel was a sense of structure to its development. With his Tom Jones, Fielding introduced a new kind of fictional hero – a good hearted, well intentioned young man with ordinary human weakness, one who yields to temptation with women and to make errors in judgement. Throughout his works, Fielding attempted to give dignity and status to the genre of the novel by relating it to the classical epic.

Henry Fielding was born at Sharpham in Glastonbury in Somerset in 1707 as the son of an army lieutenant and a judge’s daughter. He was educated at Eton School, where he established a lifelong friendship with William Pitt the Elder – the famous British Whig statesman who led Britain during the Seven Years’ War. After a romantic episode with a young woman that ended in his getting into trouble with the law, he went to London where his literary career began. In 1728, he travelled to Leiden to study classics and law at the University. However, due to lack of money, he was obliged to return to London and he began writing a series of farces, operas and light comedies for the theatre, some of his work being savagely critical of the contemporary government.

“To say the truth, every physician almost hath his favourite disease” The History of Tom Jones (Henry Fielding, 1749)

In London, Fielding formed his own company and was running the Little Theatre, Haymarket, when one of his satirical plays began to upset the government. The passing of the Theatrical Licensing Act in 1737 effectively ended Fielding’s career as a playwright. He retired from the theatre and resumed his career in law and, in order to support his wife Charlotte Cradock and two children, he became a barrister. His lack of financial sense meant that he and his family often endured periods of poverty. But, Fielding never stopped writing. In 1739, he turned to journalism and became editor of The Champion. Almost by accident, in anger at the success of Samuel Richardson’s novel Pamela, or Virtue Rewarded, Fielding took to writing novels in 1741. His is first major success was Shamela, an anonymous parody of Richardson’s original melodramatic novel. He immediately published The Adventures of Joseph Andrews in 1742, an original work supposedly dealing with Pamela’s brother, Joseph. Although he begun to write the novel also as a parody, this work developed into an accomplished novel in its own right and is considered to mark Fielding’s debut as a serious novelist.

Fielding’s Miscellanies (3 volumes, 1743) contain The History of the Life of the Late Mr. Jonathan Wild the Great, a satirical novel about heroism. Fielding used the criminal Jonathan Wild to caricature Whig politician and British Prime Minister Robert Walpole. His greatest work however was The History of Tom Jones published in 1749 to public acclaim, a meticulously constructed picaresque novel telling the convoluted and hilarious tale of how a foundling came into a fortune. Critics agree that it is one of the greatest comic novels in the English language. In Amelia (1751), Fielding included social issues in the novel, especially criticism of the English judicial and penal system in view of his experience as a justice of the peace. 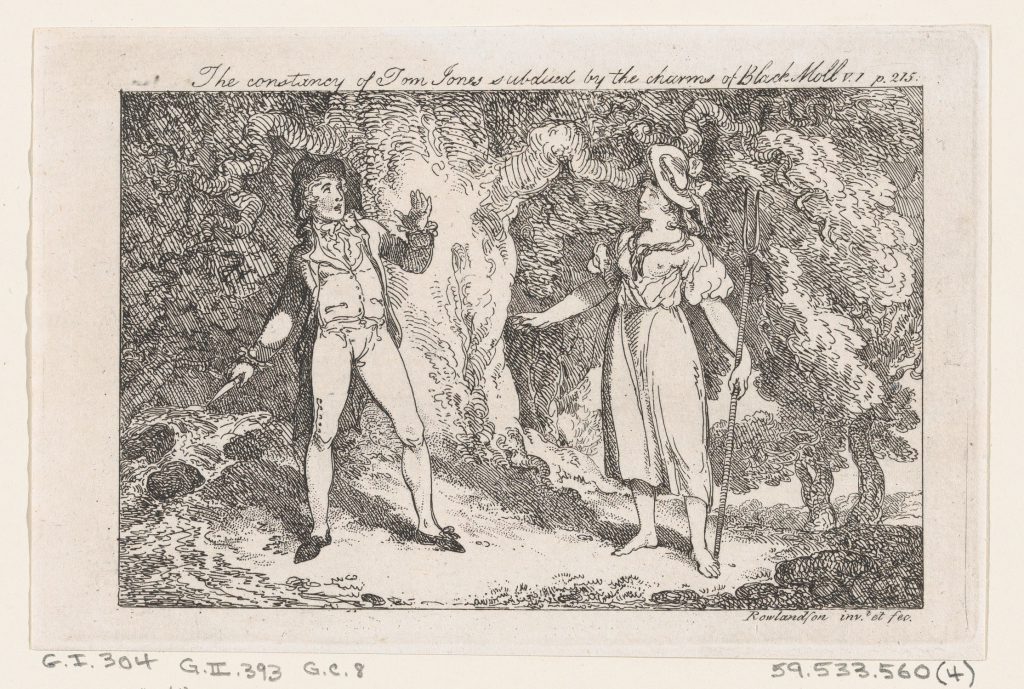 The constancy of Tom Jones subdued by the charms of Black Moll…, illustration to Henry Fielding’s “The History of Tom Jones, a Foundling” (Edinburgh, 1791), Vol. I (Book V, chapter 10)

In 1748, Henry Fielding was made a justice of the peace for Westminster and Middlesex. He campaigned against legal corruption and helped his younger half-brother, Sir John Fielding, to establish London’s first police force, the Bow Street Runners. Actually, the brothers are considered two of the best magistrates in eighteenth-century London, for they did a great deal to enhance the cause of judicial reform and improve prison conditions. Among others, the writings An Enquiry into the Causes of the Late Increase of Robbers, etc. appeared. (1751) and Proposal for Making Effective Provision for the Poor (1753). In January 1752, Fielding continued as a journalist and started a biweekly periodical titled The Covent-Garden Journal, in which he also continued to upset those in power.

“A comic writer should of all others be the least excused for deviating from nature, since it may not be always so easy for a serious poet to meet with the great and the admirable; but life every where furnishes an accurate observer with the ridiculous.”
– Henry Fielding, Jonathan Andrews (1742)

Throughout his life, Fielding suffered from poor health and his ardent commitment to the cause of justice as a great humanitarian coincided with a rapid deterioration in his health. By 1752 he could not move without the help of crutches because of gout and asthma. In an attempt to overcome his health problems, Henry Fielding went to live in Portugal for a cure but this was not successful. Fielding died on 8 Oct 1754 in Lisbon from liver failure. His Journal of a Voyage to Lisbon (1755) was published posthumously. Considering his art, Fielding believed, as did most eighteenth century writers and educated readers, that it is the purpose of art to create pleasure which is both civilized and civilizing.