You are here: Home › physics › C. F. Powell and the Discovery of the Pion 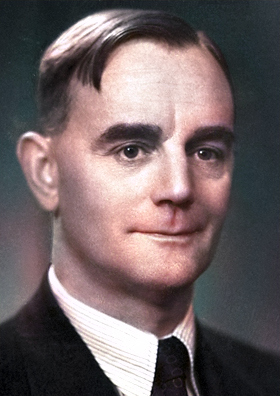 On December 5, 1903, English physicist and nobel Laureate Cecil Frank Powell, was born. Powell was awarded the 1950 Nobel Prize in Physics for his development of the photographic method of studying nuclear processes and for the resulting discovery of the pion. The pion proved to be the hypothetical particle proposed in 1935 by Yukawa Hideki of Japan in his theory.[4]

“Any device in science is a window on to nature, and each new window contributes to the breadth of our view.”
– C. F. Powell [10]

Cecil Powell was born in Tonbridge, Kent, UK, the son of gunsmith Frank Powell. After attending primary school he received a scholarship to the Judd School in Tonbridge. With further scholarships he attended the Sidney Sussex College in Cambridge, which he completed in 1924/25 with the Natural Sciences Tripos. He received his doctorate in 1927 from the Cavendish Laboratory in Cambridge under Charles Thomson Rees Wilson and Ernest Rutherford. Powell’s first research at the Cavendish Laboratory focused on condensation phenomena, demonstrating the existence of supersaturation in rapidly expanding steam. This discovery had a great influence on the further development and performance of steam turbines.

At the University of Bristol, Powell became assistant to A.M. Tyndall in the H.H. Wills Physical Laboratory. In Bristol he developed methods for the precise measurement of the mobility of positive ions and was able to detect the type of ions in most common gases. 1936/37 took part in an expedition to the West Indies, where he used a seismograph to study volcanoes. After the Caribbean expedition, he worked on the construction of a Cockcroft generator for accelerating protons and deuterons, which he used together with a Wilson cloud chamber to study neutron-proton scattering. He later became lecturer there and in 1948 he was appointed Melville Wills Professor of Physics. At Bristol, Powell devoted his time to the development of techniques for measuring the mobility of positive ions, to establishing the nature of the ions in common gases, and to the construction and use of a Cockcroft generator to study the scattering of atomic nuclei.

Powell further developed methods s employing specialised photographic emulsions to facilitate the recording of the tracks of elementary particles, and in 1938 began applying this technique to the study of cosmic radiation. Powell exposed photographic plates at high-altitude, at the tops of mountains and using specially designed balloons. Later he also used these methods to measure the energy of neutrons through the recoil protons, where he was able to establish a correlation between energy and track length, which soon found wide applications in experiments on nuclear and particle physics. He collaborated with Giuseppe Occhialini, H. Muirhead and young Brazilian physicist César Lattes. During the 1940s, C. F. Powell’s work led to the discovery of the pion (pi-meson). It proved to be the hypothetical particle proposed in 1935 by Yukawa Hideki in his theory of nuclear physics.[4] Later, however, it became known that the Pion had been discovered a little earlier in 1947 by Donald H. Perkins of Imperial College in photographic emulsions.

Pions or  π-mesons (formerly known as Yukawa particles) are the lightest mesons. They contain two valence quarks according to the standard model of particle physics and are therefore no longer regarded as elementary particles. Like all mesons, they are bosons, i.e. they have an integer spin. Their parity is negative. There is a neutral pion π0 and two charged pions: π+ and its antiparticle π– . All three are unstable and disintegrate through weak or electromagnetic interaction. The Pion was predicted as early as 1934/35 as an exchange part of the nuclear power of Hideki Yukawa in Japan. In 1936 Carl D. Anderson [5] and Seth Neddermeyer found the first ‘meson’, initially thought to be the Yukawa particle and later referred to as the muon, in cosmic radiation (‘meson‘ was then the name for each charged particle heavier than an electron, but lighter than a proton). The demarcation to the pion did not emerge until the 1940s (first postulated by Y. Tanikawa and Shoichi Sakata in Japan in 1942). Cecil Powell, Giuseppe Occhialini and César Lattes at the H. H. Wills Physical Laboratory in Bristol discovered pions in the cosmic radiation next to muons in 1947 and investigated their properties.

In 1949 he was elected a Fellow of the Royal Society, which awarded him the Hughes Medal in 1949 and the Royal Medal in 1961. In 1950 he was awarded the Nobel Prize for Physics “for his development of the photographic method of studying nuclear processes and his discoveries regarding mesons made with this method” shared with HIdeki Yukawa. From 1952 Powell was appointed director of several expeditions to Sardinia and the Po Valley, Italy, utilizing high-altitude balloon flights. During the 1950s, C. F. Powell, also a member of the World Federation of Scientific Workers, added his signature to the Russell-Einstein Manifesto put forward by Bertrand Russell, Albert Einstein and scientist Joseph Rotblat, and was involved in preparations for the first Pugwash Conference on Science and World Affairs.

When the Nobel Prize was awarded, the names of Marietta Blau and Hertha Wambacher, proposed by Erwin Schrödinger for the same achievement as pioneers of the 1920s and 1930s, whose work Powell knew and used, were ignored and not even mentioned, although there were considerations of dividing the prize between the pioneers and Powell. Powell also did not mention it in his acceptance speech.[7] Blau and Wambacher, along with Lise Meitner, are considered lesser known physicists who were denied the Nobel Prize despite their proven achievements.[6]

Powell died on 9 August 1969, whilst out walking in the foothills of the Alps near the Valsassina region of Italy, where he had been staying with friends.