You are here: Home › space › The First Woman in Space – Valentina Tereshkova 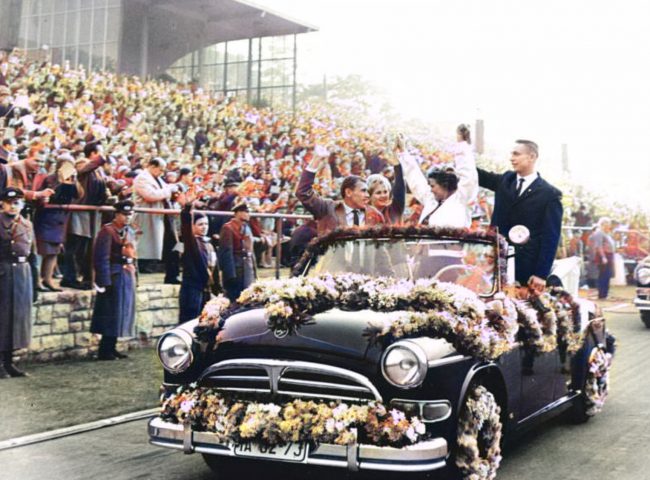 On June 16th 1963 Valentina Tereshkova, the first woman went to space with Russian space mission Vostok 6. She was selected out of more than 400 applicants to pilot Vostok 6, becoming both the first woman and the first civilian to fly in space, as she was only honorarily inducted into the USSR‘s Air Force as a condition on joining the Cosmonaut Corps. On her three-day mission in space, she performed various tests on herself to collect data on the female body’s reaction to spaceflight.

The First Woman in the Soviet Space Program

Valentina Tereshkova was born in the village Maslennikovo, Tutayevsky District, in central Russia. Tereshkova’s parents came from Belarus. Her father was a tractor driver and her mother worked in a textile plant. After school, she became interested in parachuting, and trained in skydiving at the local Aeroclub, making her first jump in 1959. This was a mandatory qualification to become an astronaut, since the soviet space program for women required the candidates to be parachutists under 30 years of age, under 170 cm (5 feet 7 inches) tall, and under 70 kg (154 lbs.) in weight. In addition, Valentina was considered a particularly worthy candidate, partly due to her “proletarian” background, and because her father, tank leader sergeant Vladimir Tereshkov, also was a war hero.

During her training to become a cosmonaut, Valentina completed numerous weightless flights, isolation tests, centrifuge tests, rocket theory, spacecraft engineering, 120 parachute jumps, and pilot training in a MiG-15 jet fighter. Although Tereshkova experienced nausea and physical discomfort for much of the flight, she orbited the earth 48 times and spent three days in space. Her radio call was Tchaika (Seagull). On 19 June she landed at Novosibirsk, where Tereshkova was received enthusiastically. In Moscow she was honoured with the title of the Soviet Union Air Cosmonaut. With a single flight, she logged more flight time than the combined times of all American astronauts, who had flown before that date. It should take almost 20 years until the US was able to catch up and Sally Ride became the first American woman sent to space on a space shuttle mission in 1983.

On 3 November 1963 she married Andrijan Nikolayev, who had taken part in the Vostok 3 expedition as a cosmonaut. In 1964 she gave birth to her daughter Elena. Tereshkova then studied at the Zhukovsky Engineering Academy of the Soviet Air Force. In May 1966 she was elected to the Supreme Soviet of the USSR, in May 1968 chairperson of the Women’s Committee of the USSR and in 1971 member of the Central Committee of the CPSU. From 1974 she was a member of the Presidium of the Supreme Soviet and from 1976 Vice-Chairman of the “Commission for Education, Science and Culture” of the Soviet Union.