You are here: Home › architecture › The Sydney Opera House 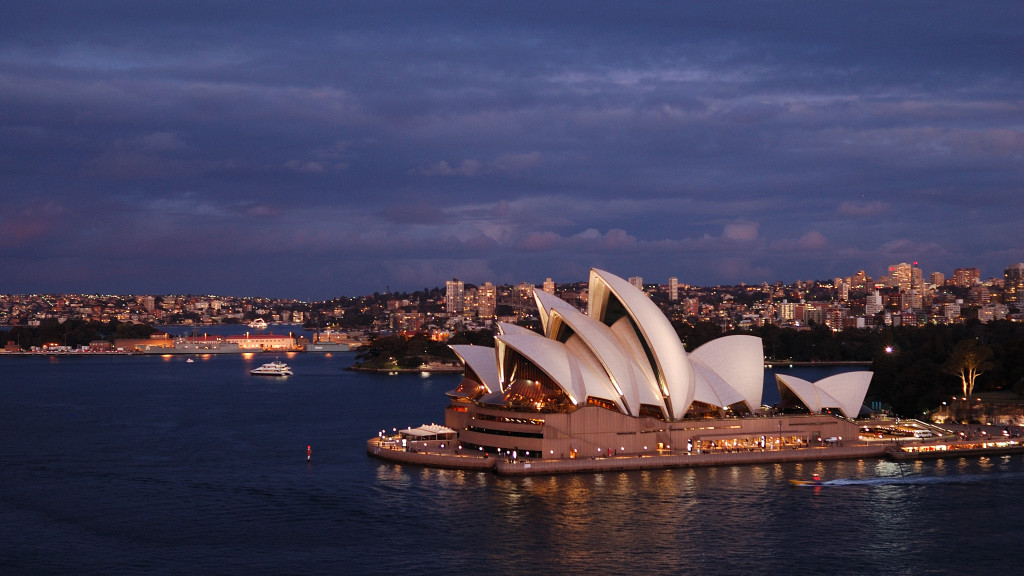 On October 20, 1973, the Sydney Opera House was formally opened by Queen Elizabeth II. It is identified as one of the 20th century’s most distinctive buildings. Designed by Danish architect Jørn Utzon in a modern expressionist design, it features a series of large precast concrete roof “shells”, each composed of sections of a sphere of 75.2 metres radius.

Planning for the opera house started in the 1940s when the director of the NSW State Conservatorium of Music, lobbied for a suitable venue for large theatrical productions. The venue for these kinds of productions was back then the Sydney Town Hall which was considered as not large enough. By 1954, the consortiums director Eugene Goossens started to receive support and designs were called in for the opera house. The international design competition was launched in September 1955 and received well over 200 entries from more than 30 countries. The criteria for the opera house included seatings for 3000 in a large hall and a small hall for 1200 people. Also, each hall should be designed for a variety of uses including full-scale operas, concerts, meetings, lectures and ballet performances. The contest’s winner was the Danish architect Jørn Utzon, which was announced in 1957 and in the same year construction began. An international jury led by Eero Saarinen decided in favor of his design, even though, strictly speaking, it violated the competition rules because it was only a rough sketch.

Bennelong Point, a peninsula in the harbor off the city on the other side of the harbor bridge completed in 1932, had been envisaged as the building site. Named after an Australian aborigine, the site had most recently been used as a streetcar repair center, but after this form of local public transport lost out to motor traffic, it had degenerated into an industrial wasteland.The old building on site, the Fort Macquarie Tram Depot was demolished in 1958 and the first of three construction stages started in 1959. Government pushed to start early, even though Utzon’s designs were not entirely complete. The first years were difficult and by mid-January 1961, construction work was already 47 weeks behind due to bad weather and further unexpected difficulties.

By 1963, work on the podium was finally completed but the podium columns had to be re-built to better support the roof-structure. Stage two of the construction process was the roofing. The shells that made the opera house so famous became a great challenge to the engineers as the formwork for using in-situ concrete would have been prohibitively expensive, and, because there was no repetition in any of the roof forms, the construction of precast concrete for each individual section would possibly have been even more expensive. As a result, from 1957 to 1963, the design team had to go through more than 12 iterations of the form of the shells trying to find a form that was acceptable to all parties.

The design work on the famous shells became one of the earliest use cases for computers in structural analysis in order to understand the different forces to which the shells would be subjected. Further, computers were also used for the assembly of the arches. At the end of each day, the pins in the arches were surveyed and the information was entered into the computer so the next arch could be properly placed the following day. The design of the roof was tested on scale models in wind tunnels at Southampton University in order to establish the wind-pressure distribution around the roof shape in very high winds, which helped in the design of the roof tiles and their fixtures. Hornibrook Group Pty Ltd was responsible for constructing the shells and manufactured the 2400 precast ribs and 4000 roof panels in an on-site factory and also developed the construction processes. Stage III of the construction process was mainly devoted to the opera house’s interiors.

By the end of the second stage, the original designer Utzon resigned due to political changes and Peter Hall took over the project and therefore also became responsible for the house’s interior design. Due to some issues with the acoustics, several changes were made from Utzons previous design. For example, the major hall became solely a concert hall, called the Concert Hall. The minor hall which was first thought for stage productions now incorporated opera and ballet functions and was called the Opera Theatre, later renamed the Joan Sutherland Theatre.

The Opera House was formally completed in 1973, having cost $102 million. The original cost and scheduling estimates in 1957 projected a cost of $7 million and completion date of 26 January 1963. The Sydney Opera House was formally opened by Elizabeth II, Queen of Australia, on 20 October 1973. The opening was televised and included fireworks and a performance of Beethoven‘s Symphony No. 9. Prior to the official opening, several performances were presented at the Opera House including the first solo piano recital which was played by Romola Costantino to an invited audience in the Concert Hall on 10 April 1973. The first opera performed was Sergei Prokofiev‘s War and Peace, in what was then known as the Opera Theatre on 28 September 1973, conducted by the Australian Opera’s Music Director, Edward Downes.