You are here: Home › physics › Arthur Holly Compton and the Compton Effect 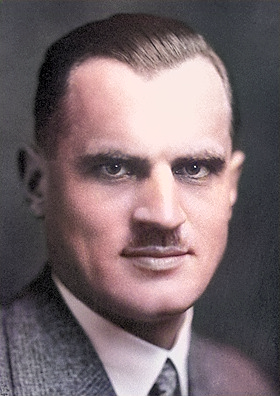 On September 10, 1890, American physicist and Nobel Laureate Arthur Holly Compton was born. Compton won the Nobel Prize in Physics in 1927 for his discovery of the Compton effect, which demonstrated the particle nature of electromagnetic radiation. It was a sensational discovery at the time: the wave nature of light had been well-demonstrated, but the idea that light had both wave and particle properties was not easily accepted.

Arthur Holly Compton was born on September 10, 1892 in Wooster, Ohio, into an academic family to Elias and Otelia Catherine Compton. Elias Compton was dean of the University of Wooster, which Arthur also attended. Compton was initially interested in astronomy. As an amateur, he purchased a telescope and photographed constellations and in 1910 Halley’s comet.In 1913, he graduated from Wooster with a Bachelor of Science degree and entered Princeton to study physics, where he received his Master of Arts degree in 1914.Compton then studied for his PhD in physics under the supervision of Hereward L. Cooke, writing his dissertation on “The intensity of X-ray reflection, and the distribution of the electrons in atoms“. When Arthur Compton earned his PhD in 1916, he, and his two brothers Karl and Wilson became the first group of three brothers to earn PhDs from Princeton. Later, they would become the first such trio to simultaneously head American colleges.

His research focused on the changes that take place in the wavelength of X-rays when they collide with electrons in metals. In 1922, Compton found that X-ray quanta scattered by free electrons had longer wavelengths and, in accordance with Max Planck’s relation, less energy than the incoming X-rays, the surplus energy having been transferred to the electrons. This discovery, known as the “Compton effect” or “Compton scattering”, demonstrated the particle concept of electromagnetic radiation, which is caused by the transfer of energy from a photon to an electron. Its discovery in 1922 confirmed the dual nature of electromagnetic radiation as both a wave and a particle.[1] In his new model, Compton interpreted X rays as consisting of particles, or “photons,” as he called them. He argued that an X-ray photon can collide with an electron of a carbon atom; when this happens, the photon transfers some of its energy to the electron and then continues on with diminished energy and a longer wavelength than it had before.[1]

In 1923, Compton published a paper in the Physical Review that explained the X-ray shift by attributing particle-like momentum to photons, something Einstein had invoked for his 1905 Nobel Prize–winning explanation of the photo-electric effect.[7] First postulated by Max Planck in 1900,[8] these were conceptualized as elements of light “quantized” by containing a specific amount of energy depending only on the frequency of the light. In his paper, Compton derived the mathematical relationship between the shift in wavelength and the scattering angle of the X-rays by assuming that each scattered X-ray photon interacted with only one electron.

The Dual Nature of Light

“When I presented my results at a meeting of the American Physical Society in 1923,” Compton later recalled, “it initiated the most hotly contested scientific controversy that I have ever known.” The wave nature of light had been well demonstrated, and the idea that it could have a dual nature was not easily accepted. It was particularly telling that diffraction in a crystal lattice could only be explained with reference to its wave nature. It earned Compton the Nobel Prize in Physics in 1927.

“The benefits of science are not only material ones. The truths that science teaches are of common interest the world over. The language of science is universal, and is a powerful force in bringing the peoples of the world closer together.”
– Arthur Holly Compton, Banquet speech for his Nobel Prize, 1927.

From 1923 to 1945 Compton was a professor of physics at the University of Chicago. Compton’s first book, X-Rays and Electrons, was published in 1926. In it he showed how to calculate the densities of diffracting materials from their X-ray diffraction patterns. Perhaps the most important work Compton carried out after going to Chicago was his work on cosmic rays. At the time, their existence was known but their origin and nature remained speculative. Their presence could be detected using a spherical “bomb” containing compressed air or argon gas and measuring its electrical conductivity. From 1930-1940, Compton led a worldwide study of the geographic variations of the intensity of cosmic rays, showing that the intensity was correlated with geomagnetic rather than geographic latitude. This gave rise to extensive studies of the interaction of the Earth’s magnetic field with the incoming isotropic stream of primary charged particles.[3] Compton attributed this to the effect of cosmic rays being made up principally of charged particles, rather than photons as Robert Millikan had suggested, with the latitude effect being due to Earth’s magnetic field.[9] 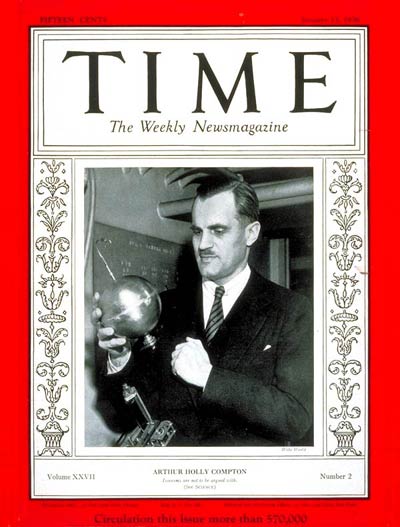 Compton on the cover of Time Magazine on January 13, 1936, holding his cosmic ray detector

In 1941 he was chairman of the committee of the National Academy of Sciences that studied the military potential of atomic energy. In this capacity he was instrumental, with the physicist Ernest O. Lawrence, in initiating the Manhattan Project, which created the first atomic bomb. From 1942 to 1945 he was director of the Metallurgical Laboratory at the University of Chicago, which developed the first self-sustaining atomic chain reaction and paved the way for controlled release of nuclear energy.[1] In June 1942, the United States Army Corps of Engineers assumed control of the nuclear weapons program and Compton’s Metallurgical Laboratory became part of the Manhattan Project. It fell to Compton to decide which of the different types of reactor designs that the Metallurgical Laboratory scientists had devised should be pursued, even though a successful reactor had not yet been built. When labor disputes delayed construction of the Metallurgical Laboratory’s new home in the Red Gate Woods, Compton decided to build Chicago Pile-1, the first nuclear reactor, under the stands at Stagg Field. Under Enrico Fermi’s direction, it went critical on December 2, 1942.[6]

After the war ended, Compton resigned his chair as Charles H. Swift Distinguished Service Professor of Physics at the University of Chicago and returned to Washington University in St. Louis, where he was inaugurated as the university’s ninth Chancellor in 1946. Compton retired as Chancellor in 1954, but remained on the faculty as Distinguished Service Professor of Natural Philosophy until his retirement from the full-time faculty in 1961. In retirement he wrote Atomic Quest, a personal account of his role in the Manhattan Project, which was published in 1956. Arthur Holly Compton died in Berkeley, California, from a cerebral hemorrhage on March 15, 1962.