You are here: Home › communication › How the ARPANET became the Internet 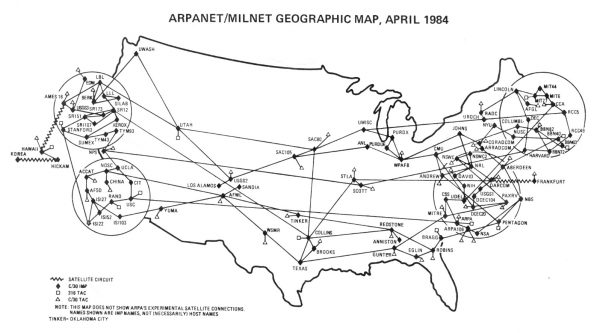 On January 1, 1983, the ARPANET as predecessor of today’s internet switched from NCP (Network Control Protocol) to the TCP/IP protocol, and the ARPANET then became one subnet of the early Internet.

“There are some people who imagine that older adults don’t know how to use the internet. My immediate reaction is, “I’ve got news for you, we invented it.”
— Vint Cerf, a “father of the internet,” quoted at age 73 in [8]

The Birth Myth of the Net

As you might know, the origins of today’s Internet date back to the times of Cold War, when the Soviets succeeded to deliver their very first artificial satellite Sputnik 1 into orbit in 1957 [1] and in order to catch up the USA was forced to engage a major effort in a national funding initiative, when President Eisenhower founded the ARPA, the Advanced Research Project Agency, a branch of the military that developed top secret systems and weapons during the Cold War. Reliable communications, also among electronic computers was one of the subjects on the ARPA’s research agenda, and thus, packet switching networks came into focus.

How to Connect totally Heterogeneous Computers

One major obstacle in computer communication was based on the fact, that computers in the 1960s were almost all individual constructions, perfectly fit for the individual purpose of a specific organization or company. There was no such thing as a standard operating system or even a standard way to encode numbers and numerical data. To overcome this difficulty of connecting completely different computer systems all based on different architectures, ARPA Information Processing Techniques Office (IPTO) came up with the idea of establishing a subnetwork with homogeneous communication processors as relays (so called Internet Message Processors, IMPs).

In this way the various computer systems had only to establish a single interface to connect to the general subnetwork system instead of developing interfaces between each pair of connected computer systems, which was much more efficient and – more important – therefore cheaper. The ARPANET based on this subnetwork communication was first switched on back in 1969 and grew ever since. But, it was rather expensive to connect your computer to the ARPANET, because you always had to purchase additionally an IMP to do the subnetworking.

Towards a Next Generation of ARPANET

After initiating the pioneering ARPANET in 1969, DARPA (now Defense Advanced Research Project Agency) started work on a number of other data transmission technologies. In 1972, Robert E. Kahn joined the DARPA IPTO [2], where he worked on both satellite packet networks and ground-based radio packet networks, and recognized the value of being able to communicate across both. In the spring of 1973, Vinton Cerf, the developer of the existing ARPANET Network Control Program (NCP) protocol, joined Kahn to work on open-architecture interconnection models with the goal of designing the next protocol generation for the ARPANET. 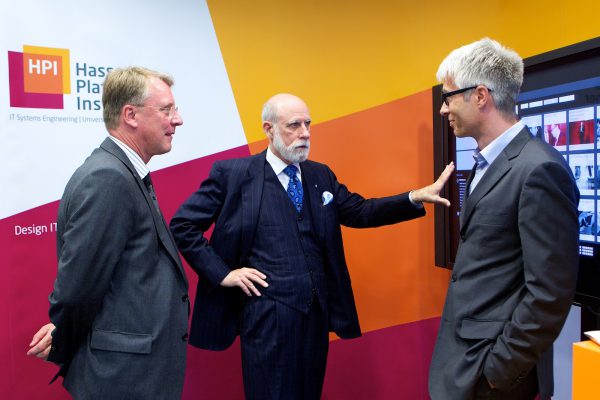 By the summer of 1973, Kahn and Cerf had worked out a fundamental reformulation, where the differences between network protocols were hidden by using a common internetworking protocol, and, instead of the network being responsible for reliability, as in the ARPANET, the hosts became responsible. The network’s design provides only the functions of efficiently transmitting and routing traffic between end nodes and that all other intelligence should be located at the edge of the network, in the end nodes. Using this simple design, it became possible to connect almost any network to the ARPANET, irrespective of their local characteristics, thereby solving Kahn’s initial problem.

A dedicated computer called a router is provided with an interface to each network. It forwards packets back and forth between them. From 1973 to 1974, Cerf’s networking research group at Stanford worked out details of the idea, resulting in the first TCP specification. In 1975, a two-network TCP/IP communications test was performed between Stanford and University College London (UCL). In November, 1977, a three-network TCP/IP test was conducted between sites in the US, the UK, and Norway. Several other TCP/IP prototypes were developed at multiple research centers between 1978 and 1983. In March 1982, the US Department of Defense declared TCP/IP as the standard for all military computer networking. The migration of the ARPANET to TCP/IP was officially completed on flag day January 1, 1983, when the new protocols were permanently activated.