You are here: Home › computer science › Robert Kahn and the Internet Protocol 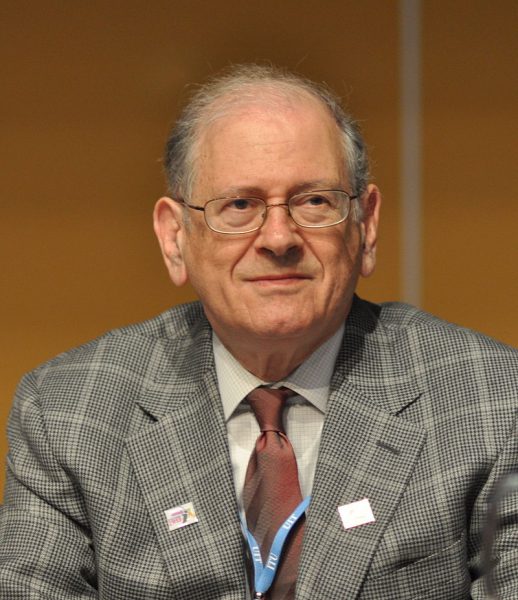 On December 23, 1938, American computer scientist and internet pioneer Robert E. Kahn was born. Along with Vint Cerf, Kahn invented the Transmission Control Protocol (TCP) and the Internet Protocol (IP), the fundamental communication protocols at the heart of the Internet. I had the pleasure to meet Bob Kahn (as well as Vint Cerf) in the course of one of the IPv6 summits at Hasso Plattner Institute Potsdam, Germany, by the time I was working as a senior researcher there.

Kahn was born in New York to Beatrice Pauline (née Tashker) and Lawrence Kahn, a high school administrator. Through his father, he is related to futurist Herman Kahn.[1] After receiving a B.E.E. from the City College of New York in 1960, Kahn earned M.A. and Ph.D. degrees from Princeton University in 1962 and 1964 respectively. He worked on the Technical Staff at Bell Laboratories and then became an Assistant Professor of Electrical Engineering at MIT. He took a leave of absence from MIT to join Bolt Beranek and Newman, where he was responsible for the system design of the ARPANET, the first packet-switched network. In 1972 he moved to DARPA and subsequently became Director of DARPA’s Information Processing Techniques Office (IPTO). While Director of IPTO he initiated the United States government’s billion dollar Strategic Computing Program, the largest computer research and development program ever undertaken by the federal government.[2]

The Rise of ARPANET

In the fall of 1972, he demonstrated the ARPANET by connecting 20 different computers at the International Computer Communication Conference, “the watershed event that made people suddenly realize that packet switching was a real technology.” The network was based on a radically different architecture known as packet switching, in which messages were split into multiple “packets” that traveled independently over many different circuits to their common destination. But the ARPANET was more than a predecessor to the Internet—it was the common technological context in which an entire generation of computer scientists came of age.[3] He then helped develop the TCP/IP protocols for connecting diverse computer networks. After he became Director of IPTO, he started the United States government’s billion dollar Strategic Computing Initiative, the largest computer research and development program ever undertaken by the U.S. federal government.

In 1986, he left DARPA to found the Corporation for National Research Initiatives (CNRI), and as of 2015 is the Chairman, CEO and President. While at IPTO, Kahn confronted a set of problems related to the deployment of packet switching technology in military radio and satellite communications. However, the real technical problem lay in connecting these disparate military networks — hence the name Internet for a network of networks.[3]

Working on a satellite packet network project, he came up with the initial ideas for what later became the Transmission Control Protocol (TCP), which was intended as a replacement for an earlier network protocol, NCP, used in the ARPANET. While working on this, he played a major role in forming the basis of open-architecture networking, which would allow computers and networks all over the world to communicate with each other, regardless of what hardware or software the computers on each network used. The protocol is the basis for the Internet’s open architecture, which permits any computer with the appropriate connection to enter the network. Vint Cerf joined him on the project in the spring of 1973, and together they completed an early version of TCP. Later, it was separated into two separate layers, with the more basic functions being moved to the Internet Protocol (IP). The two together are usually referred to as TCP/IP, and form part of the basis for the modern Internet.

In 1992 Kahn co-founded with Vint Cerf the Internet Society, to provide leadership in Internet related standards, education, and policy. He was awarded the SIGCOMM Award in 1993 for “visionary technical contributions and leadership in the development of information systems technology“, and shared the 2004 Turing Award with Vint Cerf, for “pioneering work on internetworking, including .. the Internet’s basic communications protocols .. and for inspired leadership in networking.” In 1997 US President Bill Clinton presented him and Cerf with the National Medal of Technology, the highest technological award in the USA, and in 2005 George W. Bush awarded them the Presidential Medal of Freedom, one of the highest civilian awards in the USA.

Robert Kahn: “Conceptual Basis for Managing Information in the Internet..”, [10]