You are here: Home › literature › Isaac Asimov and the Three Laws of Robotics 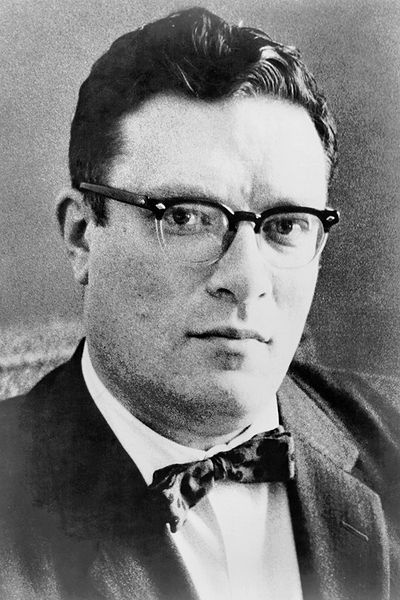 On January 2, 1920, the Russian-born author and professor of biochemistry Isaac Asimov was born. He was best known for his science fiction works in which he coined the term ‘robotics‘ and his popular science books.

The Three Laws of Robotics

2. A robot must obey the orders given to it by human beings, except where such orders would conflict with the First Law.

3. A robot must protect its own existence as long as such protection does not conflict with the First or Second Laws.

These Three Laws of Robotics, which Asimov‘s robots of the science fiction world he created were supposed to obey, were established while writing his short story ‘Runaround‘, which was published in 1942. But this was just one of his numerous works, since the author wrote or edited over 500 books and about 90000 letters during his lifetime.

Isaac Asimov was born on 2 January 1920 in Petrovichy near Smolensk, in Russian SFSR. His Jewish parents emigrated to the USA in 1923 and Asimov grew up in Brooklyn, New York. His father acquired American citizenship in 1926 and bought a candy shop where Isaac had to help from the beginning. As a result, he had little contact with his peers and became a frequent reader early on, taught himself how to read at the age of five and possessed the membership card of a loan library at the age of seven. The editions of Amazing Stories, which were displayed in his father’s shop, were his first contact with science fiction, although he was only allowed to read “officially” science fiction after Science Wonder Stories had appeared and he had convinced his father that this was valuable reading because “science” was included in the title.

In these years, the young boy with the thick horn-rimmed glasses dived into the fantastic world of Jules Verne and Edgar Allan Poe.[4,5] However, Asimov‘s professional career as a writer had to wait further years, since he preferred studying chemistry, which he successfully graduated BS from in 1939 at the Columbia University School of General Studies. After two rounds of rejections by medical schools, Asimov in 1939 applied to the graduate program in chemistry at Columbia; initially rejected and then only accepted on a probationary basis, he completed his Master of Arts degree in chemistry in 1941 and earned a PhD in biochemistry in 1948. A year later, Asimov was appointed as a lecturer in biochemistry at the Boston University Medical School.

Although he strived for a scientific career, Asimov was a founding member of the ‘Futurian Science Literary Society‘ and got to know several authors during his time at university. His first short story “Marooned Off Vesta” was published in 1939 in ‘Amazing Stories‘, but his scientific career had priority. In 1951 he was promoted to assistant professor at Boston University and 1955 to full professor. It took a few more years until the biochemist made this important decision to becoming a professional fiction writer and published an enormous amount of science fiction works from then on. He was even hired as a scientific consultant for a Star Trek movie and counts as one of the most influential writers concerning science fiction, especially topics related to artificial intelligence fascinated Asimov. 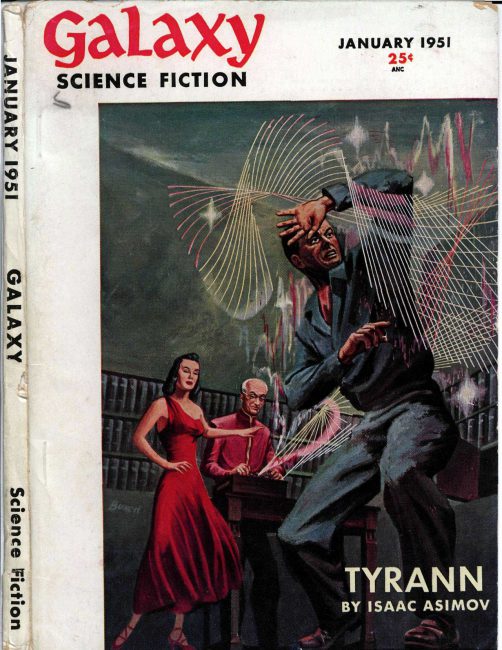 “Science fiction writers foresee the inevitable, and although problems and catastrophes may be inevitable, solutions are not.”
— Isaac Asimov, “How Easy to See the Future”, Natural History magazine (April 1975)

Isaac Asimov became quickly known world wide for his 32nd short story ‘Nightfall‘, published in 1941 and it was voted the best science fiction short story before 1965. Next to his many stories concerning robotics, Asimov is also known for his Empire series. He brought together these two topics which were set in the same ‘universe’, but different time periods in his ‘Foundation Series‘ containing 14 novels and numerous short stories and won the award of the ‘Best All-Time Series’ in the 1960‘s. The story arc of Asimov’s stories spans over 20 millennia. Inspired by Edward Gibbon‘s Decline and Fall of the Roman Empire, he described the decline of a galactic empire.[6]

Asimov’s “The Last Question” (1956), on the ability of humankind to cope with and potentially reverse the process of entropy, was his personal favorite story. Asimov coined the term “robotics” in his 1941 story “Liar!“, though he later remarked that he believed then that he was merely using an existing word, as he stated in Gold (“The Robot Chronicles“). Asimov also coined the term “spome” in a paper entitled, “There’s No Place Like Spome” in Atmosphere in Space Cabins and Closed Environments” (1965), which refers to any system closed with respect to matter and open with respect to energy capable of sustaining human life indefinitely.

Through his many works and collections, Asimov was able to inspire a great amount of science fiction writers, especially his ‘Three Laws of Robotics‘ set a milestone in the genre. As the author  John Jenkins once put it: “It has been pointed out that most science fiction writers since the 1950s have been affected by Asimov, either modeling their style on his or deliberately avoiding anything like his style“. Nevertheless, the polymath was not only busy with fantastic books, his science books concerning biochemistry, and his works on the Bible, Greek and Roman history as well as William Shakespeare made Asimov famous in many fields of literature and his published writings are represented in all ten major categories of the Dewey Decimal System.

[T]he only thing about myself that I consider to be severe enough to warrant psychoanalytic treatment is my compulsion to write … That means that my idea of a pleasant time is to go up to my attic, sit at my electric typewriter (as I am doing right now), and bang away, watching the words take shape like magic before my eyes.
— Isaac Asimov, 1969

Isaac Asimov died on 6 April 1992 of heart and kidney failure – a consequence of an HIV infection, which he contracted in 1983 through a blood transfusion during a bypass operation.