You are here: Home › cinematography › Federico Fellini – Realist of the Fantastic 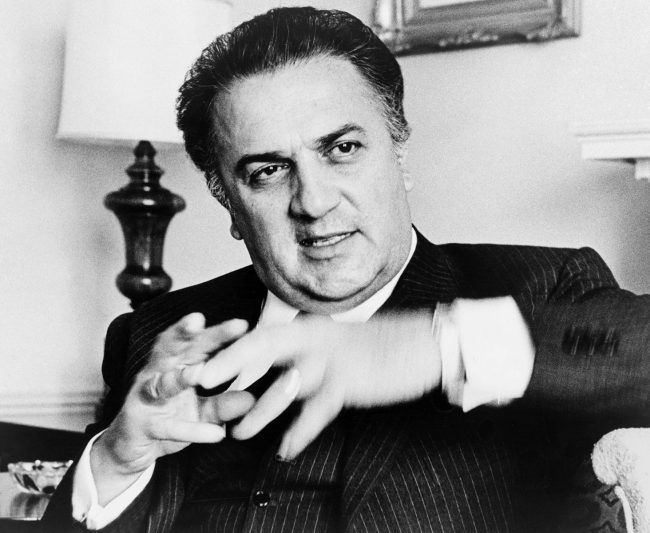 On January 20, 1920, Italian film director and screenwriter Federico Fellini was born. Known for his distinct style that blends fantasy and baroque images with earthiness, he is recognized as one of the greatest and most influential filmmakers of all time.

“All art is autobiographical; the pearl is the oyster’s autobiography.”
— Federico Fellini, in The Atlantic (December 1965)

Federico Fellini was the first of three children to be born in Rimini, Italy. His mother was from Rome and his father grew up on a farm near Rimini. In the year 1925, when fascism took over the state power in Italy, Fellini came to a catholic school led by sisters. From 1930 to 1938 Fellini attended the Gymnasium Giulio-Cesare. There he drew friends and teachers as well as various politicians, and with time he was able to sell some caricatures and comic strips to small provincial magazines, later also to larger newspapers. The Florentine weekly “420” regularly published columns and caricatures of Fellini. In 1939 he enrolled at the University of Rome.

Journalist and Cartoonist in Rome

Employed by the daily newspaper Il Piccolo and later by the satirical weekly magazine Marc’ Aurelio, Fellini was able to assert himself as a young talented journalist and cartoonist. During this time – he had been given more space in the newspaper – he began to describe his youth in the province and his beginnings in Rome in a diary-like manner and with relentless self-irony. Many of the themes portrayed appeared again in his films at some point. Besides his newspaper work he was also involved in designs for various musicals and revues, although he felt only little interest in the theater. Fellini also wrote for the radio station Radiocorriere as well as short radio plays, which often contained dream-like sequences, as they later appeared in some of his films.

Writing for radio while attempting to avoid the draft, Fellini met his future wife Giulietta Masina in a studio office at the Italian public radio broadcaster EIAR in the autumn of 1942, whom he married in 1943 and with whom he remained married until his death. In November 1942, Fellini was sent to Libya, occupied by Fascist Italy, to work on the screenplay of I cavalieri del deserto (Knights of the Desert, 1942), directed by Osvaldo Valenti and Gino Talamo. The apolitical Fellini was finally freed of the draft when an Allied air raid over Bologna destroyed his medical records. After the Allied liberation of Rome on 4 June 1944, Fellini and Enrico De Seta opened the Funny Face Shop where they survived the postwar recession drawing caricatures of American soldiers. He became involved with Italian Neorealism when Roberto Rossellini, at work on Stories of Yesteryear (later Rome, Open City), met Fellini in his shop, and proposed he contribute gags and dialogue for the script. In 1947, Fellini and Sergio Amidei received an Oscar nomination for the screenplay of Rome, Open City.

“Cinema is an old whore, like circus and variety, who knows how to give many kinds of pleasure. Besides, you can’t teach old fleas new dogs.”
— Federico Fellini, in The Atlantic (December 1965)

In February 1948, Fellini was introduced to Marcello Mastroianni, then a young theatre actor appearing in a play with Giulietta Masina. Establishing a close working relationship with Alberto Lattuada, Fellini co-wrote the director’s Senza pietà (Without Pity) and Il mulino del Po (The Mill on the Po). Fellini also worked with Rossellini on the anthology film L’Amore (1948), co-writing the screenplay and in one segment titled, “The Miracle“, acting opposite Anna Magnani. To play the role of a vagabond rogue mistaken by Magnani for a saint, Fellini had to bleach his black hair blond.

In 1950 Fellini was already ten years scriptwriter and assistant director and had participated in 19 scripts (mainly for films of neorealism) during this time.  Fellini made his debut as a director in 1950 with Luci del varietà – Lights of the Varieté, in which  the 30-year-old Fellini received support from Alberto Lattuada, who together with him staged the production and served as its guarantor. However, the movie did not receive positive critics. After the failure, the two friends reacted differently: Lattuada’s next film Anna recorded a billion lire and thus became the greatest international success of Italian cinema to date. Fellini, on the other hand, continued his chosen path and dedicated himself to the preparations for his next film.

Fellini’s following film La Strada – The Song of the Street (1953-1954), a kind of cinematic fairy tale about a girl sold by her family to a fairground artist (starring the grandiose Anthony Quinn and Fellini’s wife Giulietta Masina), won the young director national and international nominations and awards – including the Oscar for Best Foreign Language Film. In 1955 Fellini’s sixth film Il Bidone was released. After this failure almost two years passed until Fellini was able to finance his next film. Le Notti di Cabiria – The Nights of Cabiria is about a prostitute looking for love – potential financiers feared criticism from the Catholic Church. While searching for a producer, Fellini met the then still young writer Pier Paolo Pasolini. Pasolini translated the dialogues in the script into modern Roman dialect. The premiere took place in Cannes in 1957, and The nights of the Cabiria stood its ground against strong competition, such as Ingmar Bergman‘s Seventh Seal.

Fellini’s film about nightlife in Rome and the paparazzi competition for the most scandalous photos was called La dolce Vita – The Sweet Life. The film was first shown in Rome in 1960, then in Milan. Negative criticism from the traditional media was hailing, but the left-wing press defended Fellini. Five months later he received the Palme d’Or in Cannes and in the two years that followed several nominations and awards. Contrary to the fears of the producers, the film became a box-office hit – by 1965 it had earned over 2 billion lire.

In 1961 Fellini met the German paediatrician and psychoanalyst Ernst Bernhard, a pupil of C. G. Jung‘s Zurich School.[1] Fellini came into contact with psychoanalysis, analytical psychology and dream interpretation. The frequent meetings and conversations have clearly influenced Fellini’s cinema, which now received more dreamlike sequences. Fellini’s 8½ contained a high degree of autobiographical information. The film is credible as a report about Fellini’s life and his problems up to the point where it becomes fantastic. The almost surreal film can be understood as a kind of experiment of the author on his own body. 8½ avoids the severity of the tragedy and is for many Fellini’s masterpiece. Shooting began in 1962 and lasted over five months. The film was launched in Italy in 1963 and received even more critical acclaim than La dolce vita. In the world press words like magician, genius, masterful style etc. appeared fast. The film is regarded as pointing the way for experimentalism – beyond avant-garde and convention. 8½ received more than 16 awards and other nominations.

Producer and studio boss Dino De Laurentiis, who produced colossal films, took advantage of Fellini’s isolation and wanted to decorate his powerful work with a new Fellini. He signed a contract with Laurentiis and was considered the best paid director in Italy ever since. Fellini always provided him with new concepts and exposés, but Laurentiis rarely agreed. Finally, Fellini was bought out by producer Grimaldi, and he was able to begin preparations for Satyricon. In 1969, Fellini’s Satyricon was released in cinemas. At the XXX. film festival in Venice critics praised the film on the following day, but they were afraid to interpret it. In fact, Satyricon is one of Fellini’s most subjective films, requiring a profound interpretation. The director himself called it “a science fiction film directed into the past“, which represents a journey into the “unknown” – he insisted on this unusual expression.

1975 began the shooting of Casanova, the production was taken over by Alberto Grimaldi. By mid-December, the budget (5 billion lire) and deadlines had already been exceeded. Since about 40 percent of the film was still to be shot, Grimaldi distributed termination letters to the entire troop and decided to close the store. After endless debates with lawyers, the shooting continued (mid-January) and ended in May 1976. Il Casanova di Federico Fellini – Fellini’s Casanova came to the cinemas in December 1976, but the number of visitors was out of proportion to the expectations. Most critics were irritated and lacked understanding of the visual overweight, opulence, and narrative rather than enumerative character of the work. In 1980, Fellini’s City of Women is the illustrated dream of a man (magnificently played by Marcello Mastroianni) who gets lost in search of the ideal woman. The film started in Fellini’s sixtieth year and was received with respect by the critics.

Fellini’s next project, E la nave va – Fellini’s Ship of Dreams, is an associative allusion to the outbreak of World War I and, as Fellini said, “...an attempt to imprison a group of people for a journey into emptiness, that is, at sea. But it could also…“. E la nave va was presented in Venice in 1983. The reactions to the film were positive – Ingmar Bergman watched the film alone in the basement of the Palazzo, which Fellini particularly flattered. In 1984 Fellini travelled to Los Angeles and Mexico to research a Latin American scholar. After his return he wrote the exposé The Journey to Tulun. In October 1984 the shooting of Ginger and Fred began. The film is a reckoning with the soulless television world and underlines Fellini’s statements and legal actions against the bottomless proliferation of private television in Italy at the end of the seventies.

Fellini’s twenty-fourth and last film, which he directed at the age of 70, has the title La Voce della Luna – The Voice of the Moon and is about the moon-addicted Salvini (Roberto Benigni), who strolls around at night and listens to mysterious voices.

“There is no end. There is no beginning. There is only the infinite passion of life.”
— Federico Fellini, in Fellini on Fellini (1976)