You are here: Home › space › David Scott – the First Person to Drive on the Moon 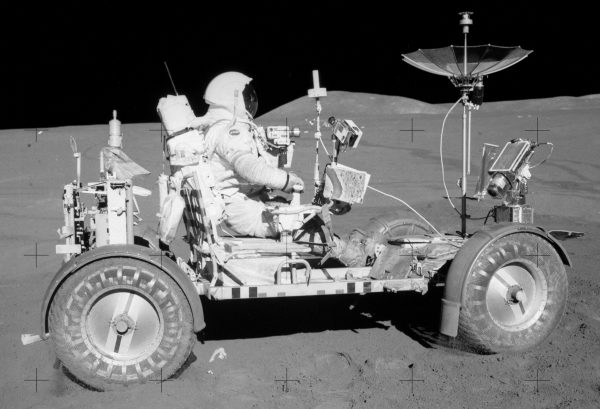 On June 6, 1932, American engineer, test pilot and NASA astronaut David Randolph Scott was born. Scott became the seventh person to walk on the Moon as commander of the Apollo 15 mission, the fourth human lunar landing. Moreover, he was the first to drive a wheeled vehicle on the moon on 31 July 1971.

“Man must explore. And this is exploration at its greatest.”
— David R. Scott

David Scott was born on Randolph Field near San Antonio, Texas, USA. Scott was educated at Texas Military Institute, Riverside Polytechnic High School in Riverside, California, where he joined the swim team and set several state and local swim records. He attended The Western High School in Washington, D.C. graduating 1949. He enrolled at the University of Michigan before receiving an invitation to attend the United States Military Academy West Point, where he graduated with a Bachelor of Science degree in 1954. Scott continued his service in the Air Force, where he was assigned to the 32d Tactical Fighter Squadron at Soesterberg Air Base (RNAF), Netherlands, from April 1956 to July 1960, as jet pilot. Upon completing this tour of duty, he returned to the U.S. for study at the Massachusetts Institute of Technology, where he received both a Master of Science degree in Aeronautics/Astronautics and the degree of Engineer in Aeronautics/Astronautics from MIT in 1962, after which he went to Edwards Air Force Base in California to train as a test pilot.[2]

Scott was the first of the Group Three astronauts, i.e. the third group of astronauts selected by NASA in 1963, to be selected to fly and was also the first to command a mission of his own. Together with commander Neil Armstrong, Scott manned the flight of Gemini 8 (March 16, 1966). They successfully rendezvoused and docked with an unmanned Agena target vehicle, but an electrical failure caused the Agena-Gemini craft to tumble wildly. The Gemini capsule was separated from the Agena. Control was finally reestablished, but the mission had to be aborted.[2] Scott served as Command Module Pilot for Apollo 9 with commander James McDivitt and lunar module pilot Russell Schweickart in 1969, the first of the Apollo missions to complete a comprehensive earth-orbital qualification and verification test of a fully configured Apollo spacecraft.

On July 26, 1971, Scott, lunar module pilot James Irwin, and command module pilot Alfred Worden were launched on the Apollo 15 flight. After a 31/2-day trip Scott and Irwin landed on the Moon, at the base of the Apennine Mountains near a gorge called Hadley Rille.[2] The crew explored the area using the first lunar rover, which allowed them to travel much farther from the Lunar Module (LM) than had been possible on missions without the rover. Using “Rover-1” to transport themselves and their equipment along portions of Hadley Rille and the Apennine Mountains, Scott and Irwin performed a selenological inspection and survey of the area and collected 82 kg of lunar surface materials.

The Lunar Roving Vehicle (LRV), popularly known as “moon buggy”, a play on the words “dune buggy”, had been in development since May 1969, with the contract awarded to Boeing. It could be folded into a space 1.5 m by 0.5 m. Unloaded it weighed 209 kg and when carrying two astronauts and their equipment, 700 kg. Each wheel was independently driven by a 200 W electric motor. Although it could be driven by either astronaut, the Commander always drove. Travelling at speeds up to 10 to 12 km/h, it meant that for the first time the astronauts could travel far afield from their lander and still have enough time to do some scientific experiments. The LRV was developed in only 17 months and performed all its functions on the Moon with no major anomalies.

Using the Lunar Roving Vehicle, the Apollo 15 astronauts covered about 28 km on three separate treks and spent more than 17 hours outside their lunar module. The mission returned to Earth on August 7. The concept of a lunar rover predated Apollo, with a 1952–1954 series in Collier’s Weekly magazine by Wernher von Braun and others [5], “Man Will Conquer Space Soon!” In this, von Braun described a six-week stay on the Moon, featuring 10-ton tractor trailers for moving supplies.

From 1972 to 1975 Scott was a member of the administrative staff of the Apollo-Soyuz Test Project. He then became director of the Dryden Flight Research Center at Edwards Air Force Base. He left the space program in 1977 to enter private business in Los Angeles. In 2004 he wrote a book, Two Sides of the Moon: Our Story of the Cold War Space Race, with Soviet cosmonaut Aleksey Leonov.