You are here: Home › medical science › António Egas Moniz and the Cerebral Angiography

On November 29, 1879, Portuguese neurologist António Egas Moniz was born. He is reknown as the developer of cerebral angiography. Moniz is regarded as one of the founders of modern psychosurgery, having developed the surgical procedure leucotomy — known better today as lobotomy — for which he became the first Portuguese national to receive a Nobel Prize in 1949 shared with Walter Rudolf Hess.

António Moniz was born in the northern coastal village Avanca, Estarreja, Portugal, the son of Fernando de Pina Rezende Abreu and Maria do Rosario de Almeida e Sousa. He attended Escola do Padre José Ramos and Colégio de S. Fiel dos Jesuítas, studied medicine at the University of Coimbra, where he received his doctorate in 1901 and habilitated in 1902 with a thesis on the physiology and pathology of sexual life. In 1902, he became a professor in the Department of Neurology at the University of Coimbra, but soon left that post on entering politics in 1903. He established the Partido Republicano Centrista and represented it in the Portuguese parliament from 1903 to 1917. Later he was Portugal’s ambassador to Madrid (1917) and minister of foreign affairs (1918), in which function he attended the Paris Peace Conference, after World War I in 1919. Meanwhile, he continued to practice medicine and teach physiology and anatomy, and in 1911 he became a professor of neurology at the newly established University of Lisbon. He also worked for a time as a physician in the Hospital of Santa Maria, Lisbon.[1]

In 1926, Moniz left politics entirely when António de Oliveira Salazar gained power following a military coup d’etat, and Portugal abandoned the liberal democracy that had allowed Moniz to flourish,[4] and returned to medicine and writing full-time. In 1927 Moniz developed cerebral angiography (arteriography), a technique allowing blood vessels in and around the brain to be visualized. In various forms it remains a fundamental tool both in diagnosis and in the planning of surgeries on the brain. In cerebral angiography typically a catheter is inserted into a large artery (such as the femoral artery) and threaded through the circulatory system to the carotid artery, where a contrast agent is injected. A series of radiographs are taken as the contrast agent spreads through the brain’s arterial system, then a second series as it reaches the venous system. Prior to the advent of modern neuoroimaging techniques such as MRI and CT in the mid-1970s, cerebral angiographies were frequently employed as a tool to infer the existence and location of certain kinds of lesions and hematomas by looking for secondary vascular displacement caused by the mass effect related to these medical conditions. For this achievement, Moniz was nominated twice for the Nobel Prize. He also contributed to the development of Thorotrast, a suspension containing particles of the radioactive compound thorium dioxide, used as a radiocontrast agent in medical radiography. 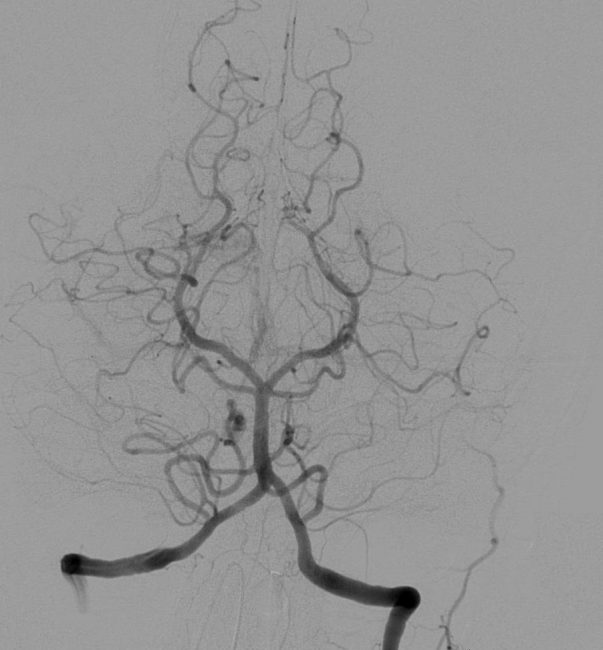 Moniz had an idea that some forms of mental illness were caused by an abnormal sort of stickiness in nerve cells, causing neural impulses to get stuck and the patient to repeatedly experience the same pathological ideas. There was no empiric evidence for his theory, but Moniz pressed on. If the nerve fibers causing these morbidly fixed ideas could be destroyed, the patient might improve.[2] In 1936, Moniz published his first report of performing a prefrontal leucotomy (lobotomy) on a human patient, a neurosurgical procedure that consists of cutting or scraping away most of the connections to and from the prefrontal cortex, the anterior part of the frontal lobes of the brain, and subsequently devised the leucotome, a surgical instrument for use in the procedure. He judged the results acceptable in the first 40 or so patients he treated, claiming, “Prefrontal leukotomy is a simple operation, always safe, which may prove to be an effective surgical treatment in certain cases of mental disorder.” The operation, though successful in eliminating the symptoms of persons suffering from apparently incurable psychoses, is now known to have serious side effects, and Egas Moniz cautioned that it was a radical procedure to be followed only after all other forms of treatment had proved to be ineffective.[3]

The Nobel Prize in Physiology

He also claimed that any behavioral and personality deterioration that may occur was outweighed by reduction in the debilitating effects of the illness. But he conceded that patients who had already deteriorated from the mental illness did not benefit much, and he did no long-term follow up. The procedure enjoyed a brief vogue, and in 1949 Antonio Egas Moniz received the Nobel Prize (shared with Walter Rudolf Hess),[7] for his discovery of the therapeutic value of leucotomy in certain psychoses. The controversial procedure allegedly cured sick people of their delusions, but it also irreparably changed their personality. Some affected patients became nursing cases and lost their intelligence. Despite a lack of experience in surgery, he performed such procedures on (predominantly female) patients without their consent. Even today, associations therefore demand that Moniz be denied the Nobel Prize.

The Blessings of Thorazine

In 1949, António Egas Moniz was shot by a schizophrenic patient multiple times, and subsequently used a wheelchair. He continued in private practice until 1955, when he died from an internal haemorrhage on 13 December 1955 just as his procedure was falling into disrepute. The popularity of the procedure declined drastically in the 1950s and beyond. Evidence of serious side effects mounted with long-term studies. The use of newly developed Thorazine, the first nonsedating tranquilizer, reduced the perceived need for most lobotomies.[2] Since falling almost completely from use in the 1960s, leucotomy has been deplored by many as brutally arrogant, and collateral derision has been directed at Moniz as its inventor.

Moniz’s formal political career began when he was elected to parliament in 1900. During World War I, he was appointed the Ambassador to Spain, and afterward, he served as Minister for External Affairs, representing Portugal at the 1919 Versailles Peace Conference. Moniz also was a prolific author who wrote and published on a wide variety of subjects including Portuguese literature, sexology and two autobiographies. His assorted writings also include a biography of Padre Faria, a monk and hypnotist from the former Portuguese colony of Goa on the west coast of India; a biography of a Portuguese physician Pedro Hispano Portucalense who became Pope John XXI in the 13th century; and a book on the history of playing cards, reflecting Moniz’s interest in gambling.[4]

At yovisto academic video search you can learn more about ‘Imagining the Brain‘ in a lecture by Richard Ivry.