You are here: Home › physics › Otto von Guericke and the Horror of Vacuum 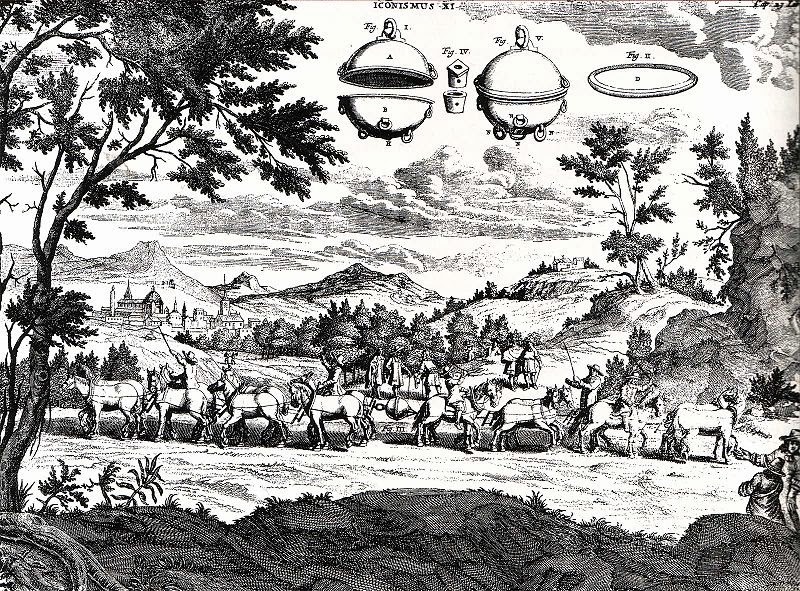 On November 30, 1602, German scientist, inventor, and politician Otto von Guericke was born. One of his major scientific achievements was the establishment of the physics of vacuums, which he gave proof of in a famous public experiment. He also was an envoy at the Peace of Westphalia after the Thirty Year’s War.[4]

“For God cannot be contained in any location, nor in any vacuum, nor in any space, for He Himself is, of His nature, location and vacuum.”
– Otto von Guericke, Experimenta Nova, Book II, Chapter VII

Guericke was the only son of Hans Gericke (1555-1620), council chamberlain and later mayor of Magdeburg, and the wealthy patrician daughter Anna von Zweydorff from Braunschweig (1580-1666). From 1617 to 1619 he studied at the University of Leipzig at the Faculty of Artists, a few weeks at the University of Helmstedt and in law at the University of Jena from 1621 to 1623 as well as 1623 to 1624 in Leiden law and fortress building. This was followed by an educational trip (or cavalier tour) through England and France. In November 1625 he was back in Magdeburg. After the destruction of the city in 1631 he joined the Swedish army as a fortress engineer in Erfurt and from 1632 in Magdeburg. From 1636 to 1646 he also worked in Magdeburg in the service of the Electorate of Saxony. 1646 he was elected after first diplomatic successes to one of the four mayors of the old city Magdeburg. From 1642 to 1663 he was on diplomatic missions on behalf of the city; this included participation in the negotiations on the Peace of Westphalia, the Execution Day in Nuremberg in 1649/1650 and the Imperial Diet in Regensburg in 1653/1654.

An Interest in Natural Sciences

From about 1645 on, stimulated by the discussion on astronomy, he started investigations into pneumatics, for which he was to become famous. Already in 1656 a lively correspondence began with the professor of philosophy and mathematics in Würzburg, Caspar Schott. Schott published his work Mechanica hydraulico-pneumatica in 1657, which contains the appendix Neuer Magdeburger Versuch (New Magdeburg experiment). This is Otto von Guericke’s first publication. In 1664 Caspar Schott published another work Techica curiosa in Würzburg. It contains the second publication by Otto von Guericke. In 1663 he finished the manuscript of the Experimenta nova, but did not print it until 1672 in Amsterdam. 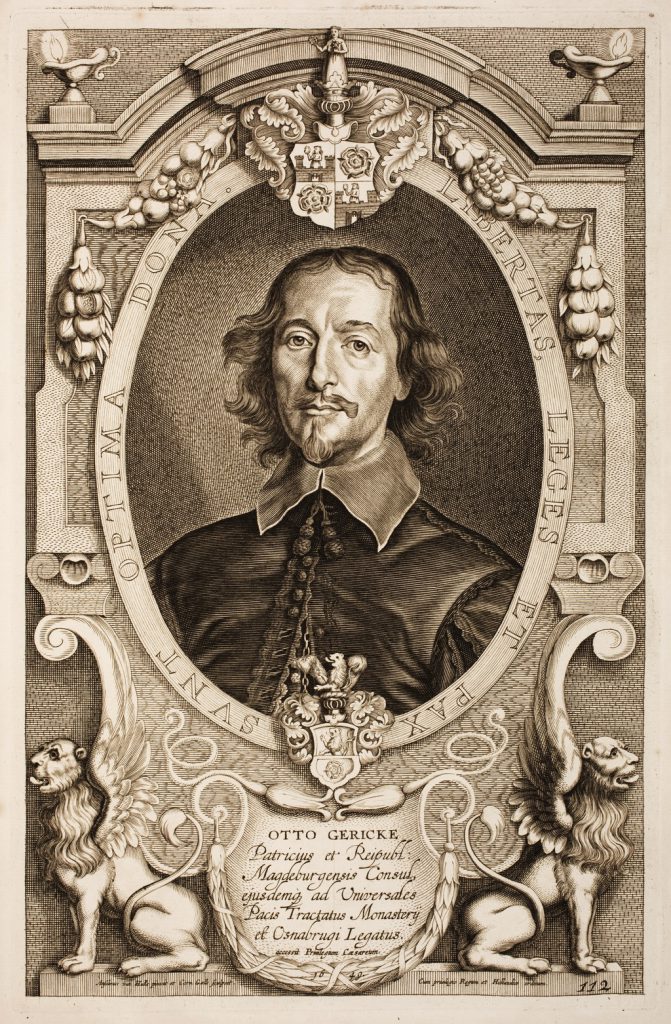 On 4 January 1666 he was ennobled by Emperor Leopold I, adding an “u” (Otto von Guericke) to his surname so that it could also be pronounced correctly by foreign diplomats, since French was used at that time as the emerging language of diplomats and thus his name was pronounced equally in French and German. In 1676 he refused the regular assumption of the mayor’s office for health reasons. In 1678 he was declared “pro emerito” by the council. In 1681, when the plague broke out in Magdeburg, he moved to his son in Hamburg, after the honorary tax exemption in Magdeburg had been cancelled. Guericke died in Hamburg in 1686. After the transfer of his bones to Magdeburg, he was buried in the Johanniskirche in the Alemann/Guericke-Gruft on 2 July 1686.

Guericke’s main scientific achievement is the justification of vacuum technology. He invented the piston vacuum air pump in 1649 and the air balance in 1650, investigated the properties of the (partial) vacuum in a large number of experiments and created applications such as the lifting test and the wind sleeve. He was able to show that light penetrates the airless space, but not sound. In public, he demonstrated the power of air pressure with spectacular experiments. He attracted particular attention in 1654 when he had spectacular experiments on the effect of air pressure performed on the Haidplatz in Regensburg on the occasion of a Reichstag in the presence of Emperor Ferdinand III and many princes. In the summer of 1657, Guericke had combined two large hemispheres made of copper (Magdeburger Halbkugeln) by means of a seal and pumped the air out of the interior. Then eight horses were stretched in front of each hemisphere, one after the other, to tear them apart, but this did not succeed. When the balls were filled with air again, they fell apart on their own. In another experiment, Guericke had a cylinder with a movable piston set up. A rope was attached to the piston, which ran over a pulley and was held by 50 men. When Guericke sucked the air out of the cylinder, the men could not prevent the piston from sinking because the atmospheric pressure was stronger against a vacuum. That was the momentous invention of his lifting machine.

With those spectacular events, von Guericke was able to proof what Blaise Pascal has already predicted. Furthermore, his experiments and inventions showed that nature knows a vacuum. Aristotle’s postulated “disgust of nature for emptiness” (Horror Vacui) was thus refuted.[5] Guericke is also credited with new knowledge in the field of electricity. This is based on experiments with a sulphur sphere, first published by him in 1672, in which he tried to prove the cosmic forces he postulated.