You are here: Home › medical science › Walter Hess and his Mapping of the Brain 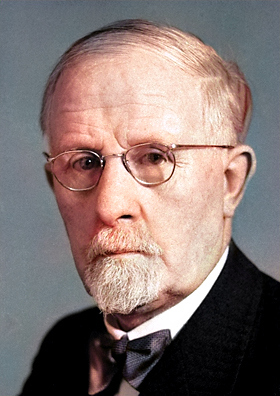 On March 17, 1881, Swiss physiologist Walter Rudolf Hess was born. Hess shared the Nobel Prize in Physiology or Medicine in 1949 with Antonio Egas Moniz for his discovery of the functional organization of the interbrain as a coordinator of the activities of the internal organs.

“A recognized fact which goes back to the earliest times is that every living organism is not the sum of a multitude of unitary processes, but is, by virtue of interrelationships and of higher and lower levels of control, an unbroken unity”
– Walter Rudolf Hess, as quoted in [10]

Walter Hess was born in Frauenfeld, Canton Thurgau, Switzerland to Clemens Hess and Gertrud Hess (née Fischer). In his early years, he was supported by his father who was a physics professor and allowed him to perform experiments in his laboratory. In 1899, Hess began to study medicine in Lausanne and later also in Berlin, Kiel and Zurich. After seven years, Hess earned his medical degree and began his training as a surgeon in Münsterlingen under Conrad Brunner, earning his doctorate in 1906 with a dissertation titled  Zum Thema Viskosität des Blutes und Herzarbeit  (On the subject of viscosity of blood and heart work). Walter Hees first worked as an ophthalmologist for several years. In 1912, when he was already a family father with a position in a respected practice, Walter Hees returned to the position of assistant, in physiology, habilitating in 1913 to become Privatdozent. During the First World War Hess spent a year at the Physiological Institute of the University of Bonn under the physiologist Max Verworn. In 1917 Walter Hess was appointed full professor and director of the Physiological Institute at Zurich, as which he served until retirement 1951.

Mapping the Brain by Stimulation

Walter Hees’ research began in his student days and was initially focused on the regulation of blood circulation and respiration before he began his epochal subcortical stimulus experiments. However, in his view, the organism was an indivisible unit whose individual functions, such as the circulatory system, did not act independently, but formed parts of a regulatory system that directed them in the service of the whole. He localized the superordinate regulation in the brain stem. In 1932, Hess developed his own methodology for researching this: the punctiform stimulation or deactivation of tiny groups of cells by means of extremely fine electrodes. This technique allowed him to map regions of the brain to physiological responses. Walter Hess developed the interrupted direct-current stimulation using rather weak and low frequency stimuli for long duration.

In the diencephalon, he found and mapped in the cat the centers that, through the vegetative nervous pathways, combine the functions of the individual organs into behaviors of the whole organism. He discovered two opposite attitudes: the ergotropic, with which the animal or the human being asserts itself in its environment, and the trophotropic, thanks to which the organism recovers, nourishes and restores itself. He found out that depending on the region of the induced stimulation, he was able to evoke behaviors from excitement to apathy. Hess was hence able to differentiate between responses when stimulating the anterior (lateral) hypothalamus or the posterior ventromedial hypothalamus. For instance, Hess could influence the fall of blood pressure, hunger, thirst, as well as defecation or excitement.

While Hees first turned his research attention to cats, similar experiments later followed by Erich von Holst with chickens and José Manuel Rodriguez Delgado (Yale University) with apes and humans. In 1949 Walter Hees and António Caetano de Abreu Freire Egas Moniz [4] jointly received the Nobel Prize for Physiology or Medicine: Hess for “discovering the functional organization of the interbrain for the coordination of the activity of internal organs“, and Moniz for “discovering the therapeutic value of prefrontal leukotomy in certain psychoses”. The universities of Bern (1934) and Geneva (1944) each awarded him honorary doctorates.

Hess also dealt scientifically with the organization of motor skills, as a result of which he developed modern concepts of extrapyramidal motor skills. Hess also found that he could induce sleep in cats — a finding that was highly controversial at the time but later confirmed by other researches, including his son Rudolf Max Hess. Until old age, he also studied the interaction between the vegetative nervous system and the psyche.