You are here: Home › philosophy › Saint Anselm of Canterbury – Father of Scholasticism 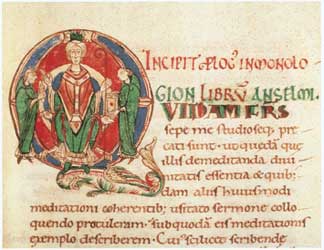 Probably on April 21, 1109, Benedictine monk, abbot, philosopher and theologian of the Catholic Church Anselm of Canterbury passed away. He was canonized, is often considered the founder of scholasticism and is the main representative of early scholasticism. Since 1720 he has carried the honorary title “Father of the Church”.

“Ergo domine…credimus te esse aliquid quo nihil maius cogitari possit.”
(Therefore, lord…we believe that you are something than which nothing greater can be thought.)
– Anselm od Canterbury, Proslogion

The Life of Anselm of Canterbury

Anselm was born in 1033 in Aosta, which had fallen to the Counts of Savoy around the time of his birth. His parents came from different noble families, his father Gundulf was of Longobard descent, his mother Ermenberga was from Burgundy and was most likely related to the Counts of Savoy, At the age of fifteen he sought entry to a nearby monastery, but this was refused to him, probably because his father had planned a political career for him. At the age of twenty-three Anselm left his homeland and wandered through France for three years until, attracted by Lanfranc‘s fame, he came to the Benedictine abbey of Le Bec. After some hesitation, he entered this abbey a year later, in 1060. Only three years later he was elected Prior, and another 15 years later he became Abbot. This period also saw the publication of his first philosophical and theological works, in particular his two famous writings Monologion and Proslogion.

When Lanfranc, now Archbishop of Canterbury, died in 1089, Anselm was favoured by many as his successor, but was not put in office by William II until 1093. In the four years that followed, the two of them, as representatives of both secular and spiritual power, conducted the investiture dispute in England. In 1097 Anselm was granted permission to visit Rome, from where he hoped for help, but received only limited help. He was refused permission to return to England by William, so Anselm lived in exile in Lyon from 1097 until William’s death in 1100. Under his successor Henry I, Anselm was able to return to England, but had to go into exile again between 1103 and 1107. Returning to England, he died in 1109.

In the preface to Proslogion, Anselm formulated in two much-cited sentences one of the basic positions of scholasticism with which he determines the relationship between faith and reason:

Fides quaerens intellectum – “Faith that seeks insight”
Credo, ut intelligam – “I believe so that I understand”

A lasting effect was also achieved by Anselm’s ontological proof of God, which is also in the Proslogion, actually a meditation on the nature of God. It belongs to the most discussed arguments in the history of philosophy. Philosophers like Thomas Aquinas,[4] Hegel, Descartes and Kant critically examined it. The starting point of the argument is the sentence borrowed from Augustine that God is “that beyond which greater things cannot be thought” (aliquid quo maius nihil cogitari potest).[5] The reconstructions of the argument are not uniform, but the basic idea is this: we can think that there is something beyond which greater things cannot be thought. Something that exists both in mind (in intellect) and in reality (in re) is greater than something that exists only in mind. So if we can think of something that cannot be thought of in the greater sense, it must also exist in reality (otherwise it would be something that can be thought of in the greater sense). 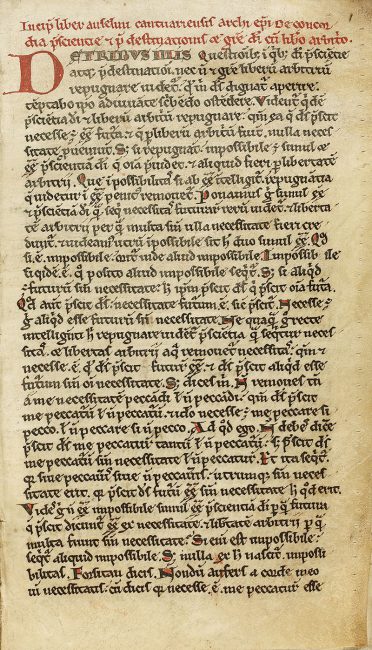 Anselm of Canterbuty, The first page of a 12th-century manuscript of the De Concordia

In Cur Deus Homo, he advocates the doctrine that salvation through Christ is to be understood as the satisfaction of God’s righteous wrath through the death of Christ (doctrine of satisfaction). Also known is his dispute with John Roscelin, whom he classified as an extreme nominalist. Of his other writings, especially the Monologion, in which he also tries to deduce the existence of God and his attributes, as well as the writing De Veritate, which deals not only with truth but also with justice, are to be mentioned.

The Father of Scholasticism

The designation “Father of Scholasticism”, which goes back to Martin Grabmann, indicates a high esteem for Anselm. Admittedly, this epithet is still frequently used today when talking about Anselm and his influence on scholasticism. In current research, on the other hand, Anselm is rather appreciated as the “pioneer of scholasticism“, where only approaches of the scholastic method can be found, but who does not yet apply it himself. The Method of scholasticism is a procedure, based on the logical writings of Aristotle, for clarifying questions by means of theoretical considerations, starting from premises. It involves investigating an assertion that the earth is a disc, for example, by first presenting the arguments for and against it one after the other, and then making a decision about its correctness and giving reasons for it. Assertions are disproved either by proving them to be illogical or the result of a conceptual ambiguity, or by showing that they are inconsistent with evident or already proven facts. 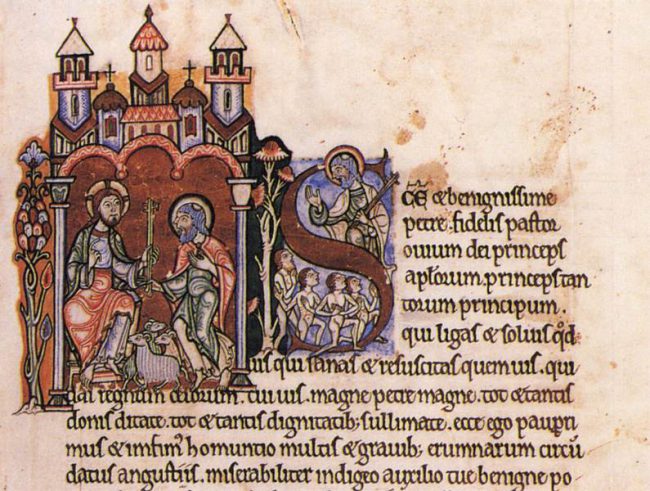 A 12th-century illumination from the Meditations of St. Anselm

Anselm of Canterbury has been called “the most luminous and penetrating intellect between St Augustine and St Thomas Aquinas”. Anselm’s students included Eadmer, Alexander, Gilbert Crispin, Honorius Augustodunensis, and Anselm of Laon. His works were copied and disseminated in his lifetime and exercised an influence on the Scholastics, including Bonaventure, Thomas Aquinas, Duns Scotus,[3] and William of Ockham.[2] His thoughts have guided much subsequent discussion on the procession of the Holy Spirit and the atonement. His work also anticipates much of the later controversies over free will and predestination. Anselm’s canonization was requested of Pope Alexander III by Thomas Becket at the Council of Tours in 1163.[1] He may have been formally canonized before Becket’s murder in 1170: no record of this has survived but he was subsequently listed among the saints at Canterbury and elsewhere.Anselm was proclaimed a Doctor of the Church by Pope Clement XI in 1720; he is known as the doctor magnificus (“Magnificent Doctor”).

Gregory B. Sadler, Anselm of Canterbury, On Truth – Introduction to Philosophy, [11]