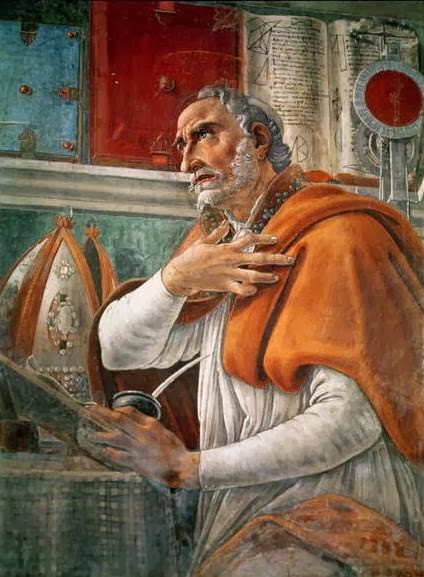 St Augustine in his Study,
Painting by Sandro Botticelli (1480)

On November 13, 354 A.D., Augustine of Hippo, also known as Saint Augustine was born. He was bishop of Hippo Regius located in the Roman province of Africa. As an early Christian theologian his writings are considered very influential in the development of Western Christianity and Western philosophy. Among his most important works are City of God and Confessions, which continue to be read widely today.

Why should you read a book that is more that 1,600 years old? Well, simply because it is a very original autobiographical source that gives us a unique view of the everyday living in the late Roman Empire and early Christianity. Augustine has written his Confessions to give us the chance to live with him through his very personal process of change from paganism to Christianity. And this really is worth while reading, because Augustine writes in a rather open way about his personal feelings and experiences. But, let’s first take a look on Augustine’s biography.

“What then is time? If no one asks me, I know what it is. If I wish to explain it to him who asks, I do not know.” (Augustine of Hippo, from Confessions)

Aurelius Augustinus was born in 354 A.D. in the municipium of Thagaste (today Algeria) in Roman Africa to a family of honestiores, an upper class of citizens known as honorable men. His mother, Monica, was a devout Christian, though his father Patricius was a Pagan who converted to Christianity on his deathbed. At the age of 11, he was sent to school at Madaurus, where he became familiar with Latin literature, as well as pagan beliefs and practices. His first insight into the nature of sin occurred when he and a number of friends stole fruit they did not even want from a neighborhood garden. At the age of 17, Augustine went to Carthage to continue his education in rhetoric. Although raised as a Christian, Augustine left the church to follow the Manichaean religion, much to the despair of his mother, Monica.

“Patience is the companion of wisdom.” (Augustine of Hippo)

Grant me chastity and continence, but not yet

As a youth Augustine lived a rather hedonistic lifestyle, associating with young men who boasted of their sexual exploits with women and urged the inexperienced boys, like Augustine, to seek experience or to make up stories about their experiences in order to gain acceptance and avoid ridicule. It was during this period that he uttered his famous prayer, “Grant me chastity and continence, but not yet.” From 373 to 374, Augustine taught grammar at Thagaste, when he moved to Carthage to conduct a school of rhetoric to remain there for the next nine years. In 383 he moved to establish a rhetoric school in Rome, where he believed the best and brightest students, but was rather disappointed with the Roman schools, where he was met with apathy. Instead to pay their fees, the students simply fled. With the support of the prefect of the City of Rome, Symmachus, Augustine became professor of rhetoric at the imperial court in Milan in late 384. While being in Rome, Augustine is reported to have completely turned away from Manichaeanism, and instead embraced the scepticism of the New Academy movement. At Milan, his mother pressured him to become a Christian. But it was the bishop of Milan, Ambrose, who had most influence over Augustine. Like Augustine, Ambrose was a master of rhetoric, but older and more experienced.

In the summer of 386, Augustine converted to Christianity. As Augustine later told it, his conversion was prompted by a childlike voice he heard telling him to “take up and read” (Latin: tolle, lege), which he took as a divine command to open the Bible and read the first thing he saw. Augustine read from Paul’s Epistle to the Romans, chapter 13, verses 13 and 14, to wit:

Not in rioting and drunkenness, not in chambering and wantonness, not in strife and envying, but put on the Lord Jesus Christ, and make no provision for the flesh to fulfill the lusts thereof.

Bishop Ambrose baptized Augustine, along with his son Adeodatus, on Easter Vigil in 387 in Milan and one year later, Augustine returned to Africa to live a life of aristocratic leisure at his family’s property. But, after the death of his mother Monica and his son Adeodatus, Augustine then sold his patrimony and gave the money to the poor. In 391 Augustine was ordained a priest in Hippo Regius, in Algeria and soon became a famous preacher. In 395 he was made coadjutor Bishop of Hippo, and became full Bishop shortly thereafter, where he remained until his death in 430. Augustine worked tirelessly in trying to convince the people of Hippo to convert to Christianity. He continued to lead a monastic life in the episcopal residence. He left a regula for his monastery that led to his designation as the “patron saint of regular clergy.”

“The good man, though a slave, is free; the wicked, though he reigns, is a slave, and not the slave of a single man, but — what is worse — the slave of as many masters as he has vices.” (Augustine of Hippo, from City of God)

Shortly before Augustine’s death the Vandals, a Germanic tribe invaded Roman Africa and besieged Hippo in the spring of 430. They destroyed all of it but Augustine’s cathedral and library, which they left untouched. In January 1327, Pope John XXII appointed the Augustinians guardians of the tomb of Augustine in Pavia, Italy, where his remains had been transferred. By that time, however, the actual remains of Augustine could not be authenticated anymore. Augustine was canonized by popular acclaim, and later recognized as a Doctor of the Church in 1298 by Pope Boniface VIII. He is considered the patron saint of brewers, printers, theologians, sore eyes, and a number of cities and dioceses.

Augustine’s Confessions as his most famous piece of work outlines Augustine’s sinful youth and his conversion to Christianity. It is widely seen as the first Western autobiography ever written, and was an influential model for Christian writers throughout the following 1,000 years of the Middle Ages. Written in his early 40s, it is not considered an complete autobiography. Nonetheless, it does provide an unbroken record of his development of thought and is the most complete record of any single person from the 4th and 5th centuries.

Augustine of Hippo, the Confessions, bks 1-6 – Introduction to Philosophy, [8]