You are here: Home › mathematics › Kolmogorov and the Foundations of Probability Theory 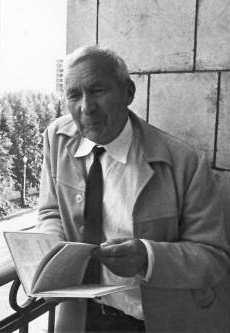 On April 25, 1903, Soviet mathematician Andrey Nikolaevich Kolmogorov was born. He was one of the most important mathematicians of the 20th century, who advanced various scientific fields, among them probability theory, topology, intuitionistic logic, turbulence, classical mechanics, algorithmic information theory and computational complexity.

“The epistemological value of probability theory is based on the fact that chance phenomena, considered collectively and on a grand scale, create non-random regularity.”
– Andrey Kolmogorov, Limit Distributions for Sums of Independent Random Variables (1954)

Andrey Kolmogorov was born in Tambov in 1903 and raised by his aunts. Fortunately, one of them was occupied as a teacher, wherefore Kolmogorov was able to receive a good basic school education. Already in his teenage years, he began designing perpetual motion machines and after moving to Moscow, Kolmogorov graduated from high school. In 1920, he enrolled at Moscow State University, more specifically at the Chemistry Technological Institute.

Working on the Theory of Fourier Series

The young scientist became widely known for his wide ranging knowledge. During his undergraduate years he published papers on the science of history and began gaining interest in set theory and the theory of Fourier series. Kolmogorov’s decision to become a mathematician occurred around that time. He was able to construct a Fourier series diverging almost everywhere, which was noticed internationally.

Right after his graduation at Moscow State University, Kolmogorov started his research under Nikolai Luzin, a famous mathematician active in the field of set theory, mathematical analysis and point-set topology. There he got to know Pavel Alexandrov and established a great friendship with him. By the way, Alexandrov was also a close friend to the German mathematician Emmy Noether, who worked with Alexandrov at the University of Moscow for a few years.[8]

And then Probability Theory

However, Andrey Kolmogorov became highly interested in probability theory along with Aleksandr Khinchin. In 1925, he published his famous paper ‘On the principle of the excluded middle‘ , proving that all statements of classical formal logic could be expressed of intuitionistic logic. The great breakthrough came in 1933. Kolmogorov published the book Foundations of the Theory of Probability, axiomatizing the probability theory in a rigorous way from fundamental axioms in a way comparable with Euclid’s treatment of geometry. It changed Andrey Kolmogorov’s status to the world’s leading expert in the field, wherefore he became the first chairman of the department of probability theory at the Moscow State University. Kolmogorov later extended his work to study the motion of the planets and the turbulent flow of air from a jet engine. He thus demonstrated the vital role of probability theory in physics. Next to his efforts in mathematics, Kolmogorov was always willing to establish a better relationship between mathematics and philosophy in aspects of probability. Kolmogorov had many interests outside mathematics, in particular he was interested in the form and structure of the poetry of the Russian author Alexander Pushkin.

In his further years of study, Kolmogorov worked on stochastic processes and classical mechanics. In his study of stochastic processes, especially Markov processes, Kolmogorov and the British mathematician Sydney Chapman independently developed the pivotal set of equations in the field, which have been given the name of the Chapman–Kolmogorov equations. Later, Kolmogorov focused his research on turbulence, where his publications (beginning in 1941) significantly influenced the field. In classical mechanics, he is best known for the Kolmogorov–Arnold–Moser theorem, first presented in 1954 at the International Congress of Mathematicians. In 1957, working jointly with his student Vladimir Arnold, he solved a particular interpretation of Hilbert’s thirteenth problem. Around this time he also began to develop, and was considered a founder of, algorithmic complexity theory – often referred to as Kolmogorov complexity theory.[9]

“Every mathematician believes that he is ahead of the others. The reason none state this belief in public is because they are intelligent people.”
attributed to Andrey Kolmogorov