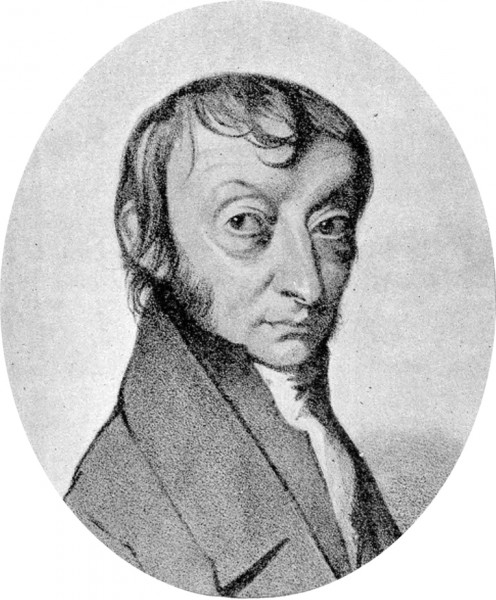 On August 9, 1776, Italian scientist Lorenzo Romano Amedeo Carlo Avogadro, Conte di Quaregna e Cerreto was born. He is most noted for his contribution to molecular theory now known as Avogadro’s law, which states that equal volumes of gases under the same conditions of temperature and pressure will contain equal numbers of molecules. In tribute to him, the number of elementary entities (atoms, molecules, ions or other particles) in 1 mole of a substance, 6.02214179(30)×1023, is known as the Avogadro constant, one of the seven SI base units and represented by NA.

Amedeo Avogadro was born at Turin to a noble family of Piedmont-Sardinia in the year 1776 the son of Filippo Avogadro, conte di Quaregna e Cerreto, a distinguished lawyer and senator, and Anna Vercellone of Biella. That city, now part of Italy, was then of the Kingdom of Sardinia and Italy was still divided into independent countries.

Avogadro graduated in jurisprudence in 1792 but did not practice law until after receiving his doctorate in ecclesiastical law four years later at age 31. In 1801 he became secretary to the prefecture of Eridano. Beginning in 1800, Avogadro privately pursued studies in mathematics and physics, and he focused his early research on electricity. [2] In 1809 started teaching them at a liceo (high school) in Vercelli, where his family lived and had some property.

Avogadro was concerned with the relationship between the electrochemical series and the affinity of the elements, the specific heat of gases and atomic and molar volumes. His aim was to describe the chemical properties of compounds by physical properties. In 1811, Avogadro published an article with the title Essai d’une manière de déterminer les masses relatives des molécules élémentaires des corps, et les proportions selon lesquelles elles entrent dans ces combinaisons (“Essay on Determining the Relative Masses of the Elementary Molecules of Bodies and the Proportions by Which They Enter These Combinations“), which contains Avogadro’s hypothesis. Avogadro hypothesized that equal volumes of gases at the same temperature and pressure contain equal numbers of molecules. From this hypothesis it followed that relative molecular weights of any two gases are the same as the ratio of the densities of the two gases under the same conditions of temperature and pressure.

From Gravimetric to Volumetric Analyses

Avogadro also astutely reasoned that simple gases were not formed of solitary atoms but were instead compound molecules of two or more atoms. Thus Avogadro was able to overcome the difficulty that Dalton and others had encountered when Joseph Louis Gay-Lussac,[5] who had published in 1808 his law on volumes (and combining gases), reported that above 100°C the volume of water vapor was twice the volume of the oxygen used to form it. It had already been established that if an element forms more than one compound with another element (such as oxygen combining with carbon to form carbon monoxide and carbon dioxide), then the weight of the second element being the same, the weights of the first element that combine with it are in simple integral proportions to each other. This formed the basis of John Dalton’s atomic theory.[3,6] Although Dalton was widely venerated in his lifetime, his proposals for atomic weights were received with scepticism in many quarters.[4] According to Avogadro, the molecule of oxygen had split into two atoms in the course of forming water vapor.[2] Although his gaseous elementary molecules were predominantly diatomic, he also recognized the existence of monatomic, triatomic, and tetratomic elementary molecules.[1] What Avogadro really did was to switch attention from gravimetric to volumetric analyses.[4]

Avogadro submitted this essay to a Jean-Claude Delamétherie’s Journal de Physique, de Chimie et d’Histoire naturelle (“Journal of Physics, Chemistry and Natural History“, Piedmont at the time forming part of the First French Empire). In 1811 he provided the correct molecular formula for water, nitric and nitrous oxides, ammonia, carbon monoxide, and hydrogen chloride. In 1814 he described the formulas for carbon dioxide, carbon disulfide, sulfur dioxide, and hydrogen sulfide. He also applied his hypothesis to metals and assigned atomic weights to 17 metallic elements based upon analyses of particular compounds that they formed. However, his references to gaz métalliques may have actually delayed chemists’ acceptance of his ideas. In 1821 he offered the correct formula for alcohol (C2H6O) and for ether (C4H10O).[1] In 1820, Avogadro became a professor of physics at the University of Turin. Turin was now the capital of the restored Savoyard Kingdom of Sardinia under Victor Emmanuel I. Avogadro was active in the revolutionary movement of March 1821. As a result, he lost his chair in 1823. Eventually, King Charles Albert granted a Constitution in 1848. Well before this, Avogadro had been recalled to the university in Turin in 1833, where he taught for another twenty years.

Little Attention from the Scientific Community

Little is known about Avogadro’s private life, which appears to have been sober and religious. Home-loving, industrious, and modest, he rarely left Turin. His minimal contact with prominent scientists and his habit of citing his own results increased his isolation.[1] The scientific community did not give great attention to his theory, so Avogadro’s hypothesis was not immediately accepted. André-Marie Ampère achieved the same results three years later by another method, but the same indifference was shown to his theory as well.[7] Besides his famous Essay of 1811, Avogadro published many physical memoirs on electricity, the dilatation of liquids by heat, specific heats, capillary attraction, atomic volumes as well as a treatise in 4 volumes on Fisica di corpi ponderabili (1837-1841).

In 1853, Avogadro submitted a final paper to the Turin Academy of Sciences on the behavior of gases subjected to different degrees of compression. Avogadro died in Turin on July 9, 1856 at age 79. In honor of Avogadro’s contributions to molecular theory, the number of molecules in one mole was named Avogadro’s number, NA or “Avogadro’s constant”. It is approximately 6.0221415×1023. Avogadro’s number is used to compute the results of chemical reactions. It allows chemists to determine amounts of substances produced in a given reaction to a great degree of accuracy. Johann Josef Loschmidt first calculated the value of Avogadro’s number, often referred to as the Loschmidt number in German-speaking countries.