You are here: Home › astronomy › Jerry R. Ehman, the Wow! Signal and the Search for Extraterrestrial Intelligence 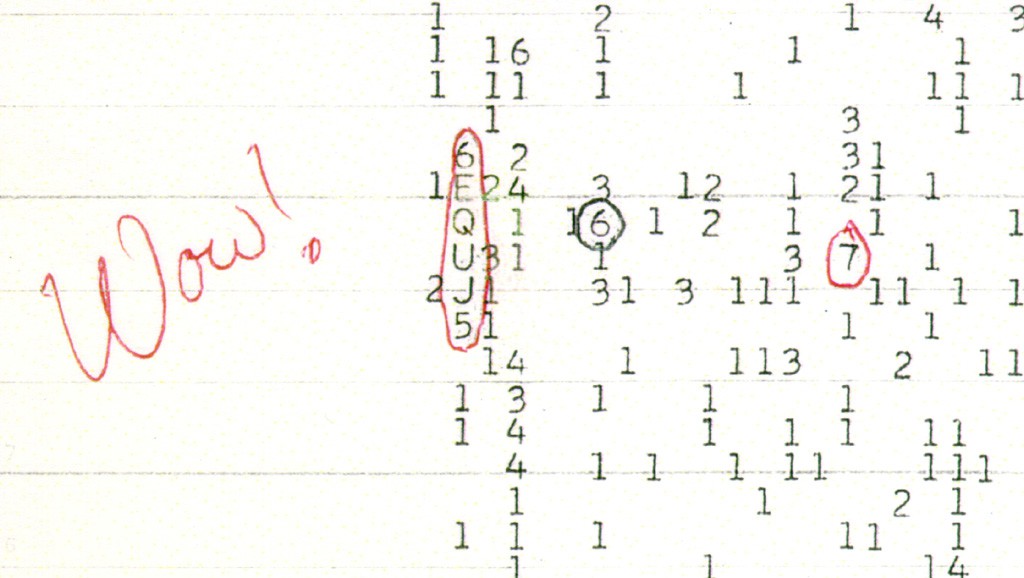 The Wow! signal. The original printout with Ehman’s handwritten exclamation is preserved by Ohio History Connection

On August 15, 1977, a strong narrowband radio signal was received by the Big Ear radio telescope of the Ohio State University, United States, then assigned to a SETI project. Astronomer Jerry R. Ehman discovered the signal a few days later, while reviewing the recorded data and was so impressed that he circled the reading on the computer printout and wrote the comment Wow! on its side.

Jerry R. Ehman received a bachelor’s degree in physics from the University of Buffalo in 1961, and an M.A. and Ph.D. from the University of Michigan in 1963 and 1969, respectively. In the later 1960s, Ehman began working as a radio astronomer with the Big Ear radio telescope and also as a faculty member in the Ohio State University Department of Electrical Engineering. [1] He was later appointed professor at the Franklin University in Columbus. In 1977, Ehman analyzed large amounts of data (by hand), processed by an IBM 1130 mainframe computer and printed on perforated paper. While checking through the data, Ehman came across the famous Wow! signal. [2]

During the early 1970s, the Ohio State University assigned the Big Ear telescope, back then located near the Perkins Observatory in Delaware, Ohio, to the scientific search for extraterrestrial intelligence (SETI). Already in 1959, the Cornell physicists Philip Morrison and Giuseppe Cocconi speculated that extra extraterrestrial civilizations attempting to communicate via radio signals might probably use a frequency of 1420 megahertz, which is naturally emitted by hydrogen, the most common element in the universe and therefore familiar to all its inhabitants. [2]

The sequence circled by Ehman, 6EQUJ5, represents the intensity variation of the radio signal over time, measured as unitless signal-to-noise ratio and ranging from 0 to 36, with the noise averaged over the previous few minutes. As previously predicted by Morrison and Cocconi the signal’s frequency was close to the value of 1420.41 MHz. [3]

Where did it come from?

But where did the signal come from? To the explanations belongs the interstellar scintillation of a weaker continuous signal — similar in effect to atmospheric twinkling, another a rotating lighthouse-like source, or a one-time burst. [4] Further research indicated that an Earth-borne signal to be very unlikely and Ehman came to believe that the most likely explanation for the signal is from an extraterrestrial civilization. Other researchers proposed that the diffuse head of a comet approaching the Sun could produce HI emissions like the Wow! signal, and identified a pair of comets that were in the right area of the sky by extrapolating the orbits back to the 1977 date. The paper acknowledges the hypothesis must be tested, including the detail that only one of the feed horns detected the signal which is an issue for any long-lived emission source. [5][6] On January 25, 2017, the renewed passage of “266P/Christensen” offered a review of his theory. As a result of this observation and comparative studies on other 1420 MHz sources, astronomer Antonio Paris and his team concluded that the cloud of the comet was the source of the Wow! signal.

Several attempts were made by Ehman as well as by other astronomers to detect and identify the signal again, which never happened. The longest SETI search program to date was conducted at the Big Ear from 1973 to 1995. After almost 40 years of operation, the telescope was dismantled in 1998, the site was sold and then used as a golf course.

The Consequences of Finding ET’s Signal [10]