You are here: Home › art › The Meistersinger of Nuremberg – Hans Sachs 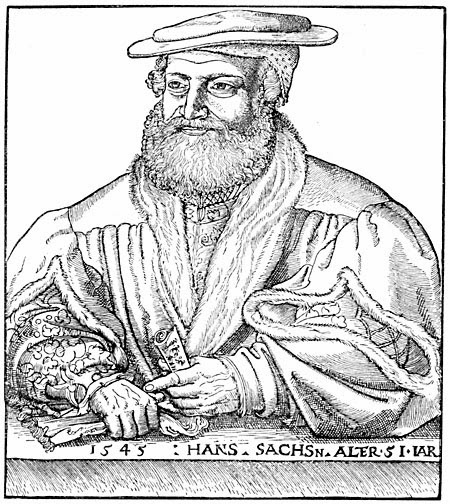 On November 5, 1494, German Meistersinger (master singer), poet, playwright, and shoemaker Hans Sachs was born. His work is considered the most important testimony of the bourgeois imperial town culture of the 16th century.

What is a Meistersinger?

What makes Hans Sachs so special – although you might have never heart of him – is his profession as being a ‘Meistersinger’. Actually, he is also the only ‘Meistersinger’ whose fame lasted over the centuries until today. Now, what is a ‘Meistersinger’? You know that in the middle ages, crafts and trade was organized as in guilds. And the Meistersinger were a German guild for lyric poetry, composition and unaccompanied art song of the 14th, 15th and 16th centuries. Probably you might have heart of the medieval ‘Minnesingers’. The Meistersingers carried on and developed the traditions of the Minnesingers. They belonged to the artisan and trading classes of the German towns, and regarded as their masters and the founders of their guild twelve poets of the Middle High German period, including Wolfram von Eschenbach, who authored the famous poem of Parzival. The schools were established first in the 14th century in the upper Rhine district, then elsewhere all over Germany. Nuremberg, under the leadership of Hans Sachs, became the most famous school in the 16th century.

The Meistersingers had strict rules for composition. The rules of the art were set down in the so-called Tabulatur or law-book of the guild. The rules first at all restricted the kinds of allowed poems and the parts of a meistergesang, including permissible rhymes. Furthermore, the most common mistakes were also recorded in the Tabulatur, concerning errors of delivery, of melody, of structure and of opinion as well as errors of rhyme or mangling of words or cacophony. The poets paid much attention to the external forms of poetry. Thus, Poetry of the Meistersinger was kind of a mechanical art that could be learned through diligent study, not something relying on divine inspiration.

Hans Sachs was born in Nuremberg as son of a tailor, and as an early child he already attended a singing school in the church of Nuremberg. He attended Latin school and at age 14 he took up an apprenticeship as a shoemaker. To become a master of his profession, after the apprenticeship, he had to set out on his Wanderjahre (or Walz) as a journeyman, that is, travelling about with companions and students. Over several years he worked at his craft in many towns all over Germany, including Regensburg, Passau, Salzburg, Munich, Osnabrück, Lübeck, and Leipzig. In 1513 he reached the small town of Wels in Austria, where he remained for a time, devoting himself to the cultivation of the fine arts, where he joined the court of Emperor Maximilian I in Innsbruck, who by chance was passing through this town. In 1516, Hans Sachs took up a kind of apprenticeship to become a Meistersinger at Munich, with Lienhard Nunnenbeck, a linen weaver, as his master, before he left for Nuremberg, where he stayed for rest of his life.

It was the time of the Protestant Reformation and Hans Sachs became an ardent adherent of Martin Luther.[5] In 1523, he wrote in Luther’s honor the poem beginning “Die wittenbergisch Nachtigall, Die man jetzt höret überall (The nightingale of Wittenberg, which is heard everywhere), and four remarkable dialogues in prose, in which his warm sympathy with the reformer was tempered by counsels of moderation. Nevertheless, the town council of Nuremberg first didn’t share Sachs’ sympathy with Luther’s reformation and he was forbidden to publish any more “pamphlets or rhymes”. Overall, Hans Sachs was a rather prolific artist. He wrote over 6000 pieces of various kinds. His productivity is especially remarkable because he kept working as a shoemaker throughout his life. After his death in 1576, Hans Sachs soon fell into oblivion until the 19th century, when Johann Wolfgang von Goethe and Christoph Martin Wieland, leading figures of German classicism, rediscovered his work. Today, Hans Sachs is remembered best, because famous composer Richard Wagner has made him the leading character of his opera ‘Die Meistersänger von Nürnberg‘.[4]