You are here: Home › history › The Illuminati – about Conspiracies and Bestsellers 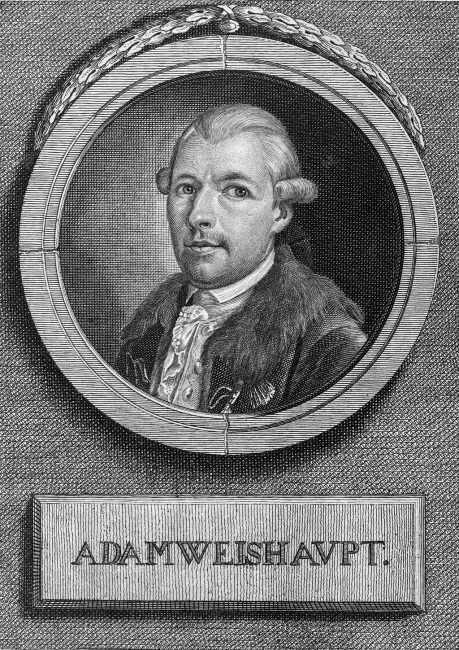 On May 1st, 1776 Adam Weishaupt, the first lay professor of canon law, founded the secret order of Illuminati at the University of Ingolstadt.  It was made up of freethinkers as an offshoot of the Enlightenment and seems to have been modeled on the Freemasons. The Illuminati’s members took a vow of secrecy and pledged obedience to their superiors. Members were divided into three main classes, each with several degrees, and many Illuminati chapters drew membership from existing Masonic lodges. In more modern contexts the name refers to a purported conspiratorial organization which is alleged to mastermind events and control world affairs through governments and corporations to establish a New World Order.

“Do you realize sufficiently what it means to rule—to rule in a secret society? Not only over the lesser or more important of the populace, but over the best of men, over men of all ranks, nations, and religions, to rule without external force, to unite them indissolubly, to breathe one spirit and soul into them, men distributed over all parts of the world?”
—  Adam Weishaupt,”Greeting to the newly integrated illuminatos dirigentes”, in Nachtrag von weitern Originalschriften vol. 2 (1787) p. 45.

Ingolstadt and the Study of Law

The Order of the Illuminati

Weishaupt designed the program of a school of mankind around 1775, but it remained unexecuted. On May 1, 1776, he founded the Union of Perfectibilists (Order of Bees), later known as the Illuminati. Their mission was to develop morality and virtue and to found an association of good people to confront the progress of evil. The real character of society was a sophisticated educational system to promote virtue and morality and to make the absolutist state superfluous through infiltration. In the order Weishaupt used the secret name Spartacus. With the accession of Baron Adolph Knigge in 1780 (order name: Philo), the Order of the Illuminati soon became widespread, whereby Knigge recruited new members especially among the ranks of the Freemasons.

“This first stage of the life of the whole race is savagery, raw nature:… a condition in which man enjoys the most exquisite goods, equality and freedom, in full abundance, and would also enjoy them forever, if he would follow the hint of nature and understand the art of not abusing his powers and preventing the outbreak of his excessive passions.”
— Adam Weishaupt, Die neuesten Arbeiten des Spartacus und Philo in dem Illuminaten-Orden (1794) pp. 20-21. 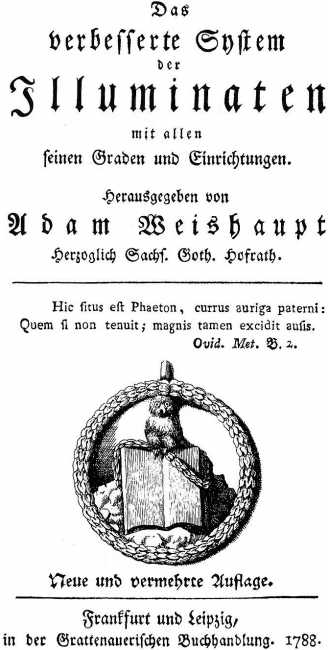 Symbol of the Confederation: The owl of Minerva, sitting on a beech tree. Prints from the year 1776.

Together with Franz Xaver von Zwack Weishaupt began to work towards putting his system of the Order of the Illuminati on a Masonic basis. A further reorganization took place after the accession of the Lower Saxon aristocrat Adolph Freiherr Knigge.[5] Knigge developed a narrative for this purpose, which he wrote to Weishaupt on 13 July 1781: According to this, there had always been a small society of men “who opposed corruption and the arts of the clergy” and used the oldest sources of religion and philosophy to purify them. They were the true originators of the Enlightenment. They had initiated the Freemason “Spartacus” into their wisdom, who then founded the Society of the Illuminati. This idea of being able to join a centuries-old association that was more assertive than all other secret societies proved to be enormously effective in advertising.

With this strategy, Knigge removed the Illuminati from Weishaupt’s original “secret wisdom school” plan. Now it was no longer students who were to be educated and formed by reading regulations that were recruited, but experienced men who had already made a career in state and society. The background to this was the crisis into which German Freemasonry had fallen in its heights after 1776 with the collapse of the Strict Observance. With this rather apolitical-romanticizing movement, which claimed to be the successor of the Templar order abolished in 1312, Karl Gotthelf von Hund und Altengrotkau had succeeded in recruiting the German lodges under his leadership.

Via the Marchese di Constantin Costanzo they obtained a patent of the Berlin grand lodge Royal York for the Munich lodge Theodor as good advice, declared it to be independent and transferred it to the Order of the Illuminati. However, the rapidly increasing number of members simultaneously marked the beginning of the end of the Illuminati Order, as conflicts within the Order broke out: Weishaupt criticized that too many members were accepted too quickly, without any examination as to whether they were suitable for the aims of the Order.[17] He also found the theosophical-esoteric images and motifs that Knigge wanted to use in connection with contemporary high degree Freemasonry in the elaboration of the individual degrees appalling. After the Bavarian government banned the company in 1784, Weishaupt lost his job at the University of Ingolstadt: He was suspended from duty in February 1785. He fled to Regensburg. Duke Ernst II of Saxony-Gotha-Altenburg granted him asylum in Gotha, where Weishaupt lived from 1786 to 1787 with the title and the pension of a court council. Here he wrote a series of justifying works on the Order, including Complete History of the Persecution of the Illuminati in Bavaria (1785). 1808 he was appointed foreign member of the Bavarian Academy of Sciences. From 1817 Weishaupt, following England’s example, advocated a generous monetary and credit system, including the financing of increased public spending. Adam Weishaupt died after a long illness on November 18, 1830.

Where the Conspiracy Begins…

As founder of the Illuminati, Adam Weishaupt became an integral part of speculative conspiracy theories, which are particularly widespread among right-wing conservative groups in the United States. The Illuminati have become famous in literature, starting with the Illuminatus! Trilogy by Robert Shea and Robert Anton Wilson; also in Foucault’s Pendulum by Umberto Eco;[1] or Angels and Demons by Dan Brown. These authors do not rely on serious sources that provide historic information about the order, but rather on conspiracy theories which are in circulation about it.

“It has been claimed that Dr. Weishaupt was an atheist, a Cabalistic magician, a rationalist, a mystic; a democrat, a socialist, an anarchist, a fascist; a Machiavellian amoralist, an alchemist, a totalitarian and an “enthusiastic philanthropist.” (The last was the verdict of Thomas Jefferson, by the way.)”
— Robert Anton Wilson in Cosmic Trigger: Final Secret of the Illuminati (1977).