You are here: Home › computer science › Vannevar Bush and his Vision of the Memex Memory Extender 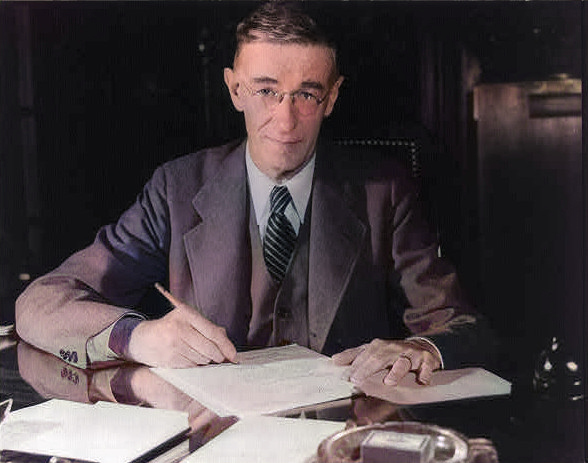 On March 11, 1890, American engineer, inventor and science administrator Vannevar Bush was born. He is best known as as head of the U.S. Office of Scientific Research and Development (OSRD) during World War II, through which almost all wartime military research and development was carried out, including initiation of the Manhattan Project. In computer science we know Vannevar Bush as the father of the Memex, an adjustable microfilm viewer with a structure analogous to that of the World Wide Web.

“As long as scientists are free to pursue the truth wherever it may lead, there will be a flow of new scientific knowledge to those who can apply it to practical problems.”
– Vannevar Bush, as quoted by George H. W. Bush in remarks while presenting National Medals of Science and Technology (13 November 1990)

The Origins of the Web

The origins of the World Wide Web as a distributed hypermedia system date back further than 1990, as you might have guessed. Of course, before hypermedia there was hypertext and already in the late 1960s Ted Nelson presented the idea of Xanadu, an early hypertext system. But did you know that already in the mid 1940s – in the time when the very first computers hit the stage filling up entire rooms and performing less than you average mobile phone today – Vannevar Bush came up with the idea of the memex, the proposal of a hypermedia system based on electromechanics and microfilm, enabling the user to access information at his very ‘fingertips’.

Vannevar Bush was born on March 11, 1890, in Everett, Massachusetts, as the third child and only son of Perry Bush, the local pastor, and his wife Emma Linwood. In 1892, the Bush family moved to Chelsea, Massachusetts, where Vannevar Bush graduated from Chelsea High School in 1909. Like his father before him, he attended Tufts College, which allowed students to gain a master’s degree in four years simultaneously with a bachelor’s degree. Thus, Bush graduated in 1913 receiving both bachelor of science and master of science degrees. By this time, Bush had already patented his first engineering invention, a surveying device. Next, Bush went to work for General Electric testing electrical equipment, but he was laid off after a fire broke out in his plant. In 1914, he took a position teaching math at Tufts’ sister college-Clark University, the same year he started to pursue his PhD at MIT where he earned his doctorate in engineering in less than a year with a thesis on Oscillating-Current Circuits: An Extension of the Theory of Generalized Angular Velocities, with Applications to the Coupled Circuit and the Artificial Transmission Line, submitted in  April 1916, and then returned to Tufts as a assistant professor.

In the first World War in which the U.S. entered in 1917, Bush had an idea for a device that would use magnetic fields to detect submarines. He traveled to Washington and convinced the director of the National Research Council to pursue his idea, which tested successful but proved to be virtually useless in real combat. By the 1930’s Bush was working on analog computers, which actually used large gears and other mechanical parts to solve equations. In 1931, he completed the first differential analyzer – a machine that was used to solve differential equations with as many as eighteen independent variables. Thus, Bush was one of the first to construct a machine based on the computer concepts developed in the nineteenth century by computer pioneer Charles Babbage.[3] An offshoot of the work at MIT was the beginning of digital circuit design theory by one of Bush’s graduate students, Claude Shannon.[4] Working on the analytical engine, Shannon described the application of Boolean algebra to electronic circuits in his landmark master’s thesis, A Symbolic Analysis of Relay and Switching Circuits.

Bush’s science policy activities also began in the 1930s. From 1938 to 1955 he served as president of the Carnegie Institution in Washington, one of the first privately-financed scientific research organizations in the U.S. During World War II he became director of the OSRD, a presidential appointment which made him responsible for the 6,000 scientists involved in the war effort. Research guided by the OSRD also included the development of radar and the Manhattan Project to develop the atomic bomb. After World War II, Bush played an important role in the Federal government’s financial support of basic research leading to the establishment of the National Science Foundation.

Just as momentous as the commitment to the “Manhattan Project” was Bush’s further development of proximity fuse, a grenade launcher that significantly increased the scattering effect through radio-controlled detonation at the last moment of the flight phase. Bush was also responsible for radar improvement and sonar development, and was involved in the founding of the Raytheon armaments company. In the midst of World War II, he received the IEEE Edison Medal not only for his achievements in new application of mathematics in engineering, but also explicitly for his great service to the nation by directing the weapons research program.

As We May Think

“Babbage, even with remarkably generous support for his time, could not produce his great arithmetical machine. His idea was sound enough, but construction and maintenance costs were then too heavy.”
— Vannevar Bush, As We May Think (1945)

As mentioned at the beginning Bush is most famous for his Memex, envisioning an automated information management system, which later inspired many of the creators of the Internet. Bush introduced the concept of the Memex already during the 1930s, which he imagined as a form of memory augmentation involving a microfilm-based “device in which an individual stores all his books, records, and communications, and which is mechanized so that it may be consulted with exceeding speed and flexibility. It is an enlarged intimate supplement to his memory.“[1] He wanted the Memex to emulate the way the brain links data by association rather than by indexes and traditional, hierarchical storage paradigms, and be easily accessed as “a future device for individual use … a sort of mechanized private file and library” in the shape of a desk.[1] The Memex was also intended as a tool to study the brain itself. 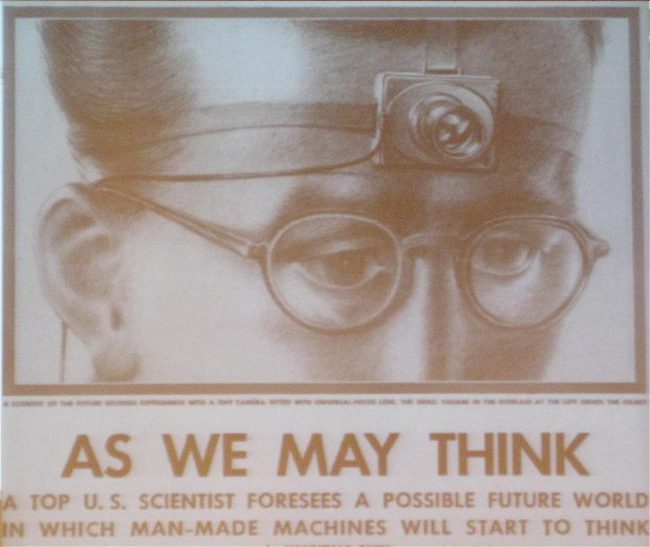 Memex as an Early Personal Asistant

“The Encyclopaedia Britannica could be reduced to the volume of a matchbox. A library of a million volumes could be compressed into one end of a desk.”
— Vannevar Bush, As We May Think (1945)

But, in his Atlantic Magazine article, predicting that “wholly new forms of encyclopedias will appear, ready made with a mesh of associative trails running through them, ready to be dropped into the memex and there amplified”, Bush also envisioned descriptions of other rarely cited but nevertheless interesting devices, such as e.g., the Cyclops Camera, “worn on forehead, it would photograph anything you see and want to record. Film would be developed at once by dry photography.” or the Vocoder, “a machine which could type when talked to“. Bush was concerned that information overload might inhibit the research efforts of scientists. Looking to the future, he predicted a time when “there is a growing mountain of research. But there is increased evidence that we are being bogged down today as specialization extends. The investigator is staggered by the findings and conclusions of thousands of other workers.” Shortly after “As We May Think” was originally published, Douglas Engelbart read it, and with Bush’s visions in mind, commenced work that would later lead to the invention of the mouse.[5] Ted Nelson, who coined the terms “hypertext” and “hypermedia“, was also greatly influenced by Bush’s essay.

During the next decades Bush was appointed chairman or director of many institutions including the Joint Research and Development Board of the War and Navy Departments, the Development Board of National Military Establishment, and also of AT&T. Bush was elected to the American Academy of Arts and Sciences in 1925, and to the National Academy of Sciences in 1934. Since 1923 he was a Fellow of the American Physical Society. In 1948 he received the Medal for Merit, at that time the highest civilian award in the USA, and in 1953 the John J. Carty Award of the National Academy of Sciences.