You are here: Home › physics › The Annus Mirabilis in Physics – Albert Einstein and the Year 1905 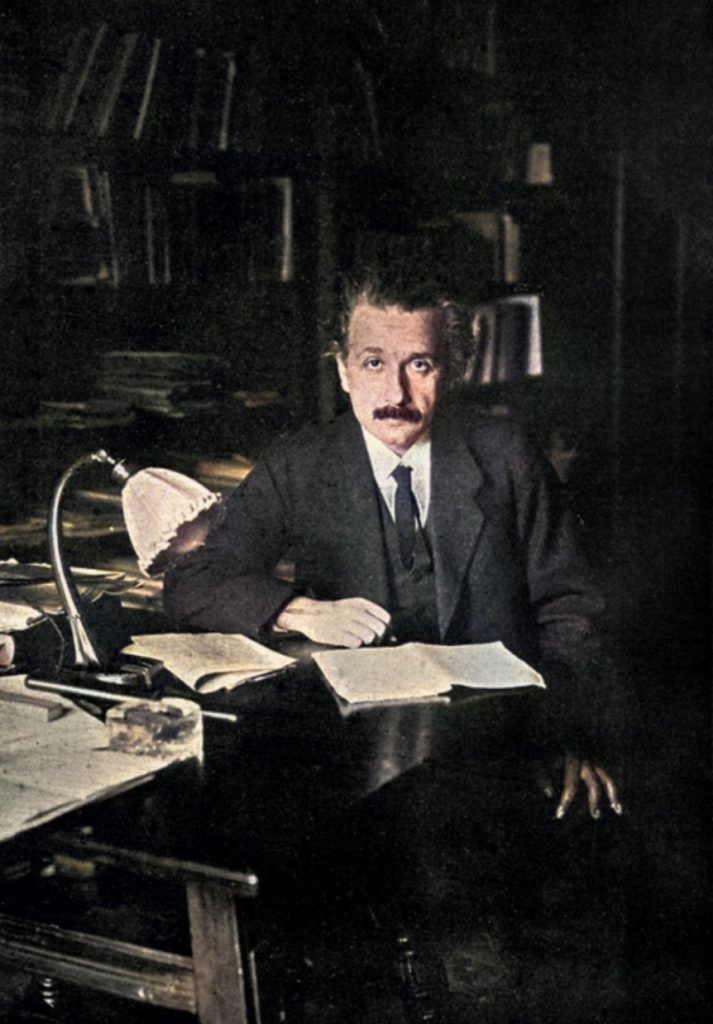 Have you ever heard of the “Annus Mirabilis” (in German “Wunderjahr“) of physics? 1905 was this Annus Mirabilis, this year of wonders or extraordinary year. History considers 1905 as the year with the most outstanding and influential papers ever published by famous physicist Albert Einstein in the   the Annalen der Physik scientific journal. These four articles contributed substantially to the foundation of modern physics and changed views on space, time, and matter.

The Third of Four Paper

On June 30 1905, Albert Einstein delivered his third paper in this year “Zur Elektrodynamik bewegter Körper” (On the Electrodynamics of Moving Bodies)[3] at the editorial department of the Annalen der Physik. It was the most important paper of the four papers of the Annus Mirabilis and laid the foundations of his special theory of relativity.

At the time the four papers were written, Einstein did not have easy access to a complete set of scientific reference materials, although he did regularly read and contribute reviews to Annalen der Physik. Additionally, scientific colleagues available to discuss his theories were few. He worked as a simple examiner at the Patent Office in Bern, Switzerland. Later he said of a co-worker there, Michele Besso, that he “could not have found a better sounding board for his ideas in all of Europe“. The patent office was not at all a university department, where you can discuss your scientific ideas. To solve this shortcoming, Einstein together with three friends and colleagues had founded the self-styled “Olympian-Academy” to have the opportunity of scientific and philosophic discussions with Michele Besso, Maurice Solvine and Paul Habicht. Their readings included the works of Henri Poincaré, Ernst Mach, and David Hume, which influenced much Einstein’s scientific and philosophical outlook. In addition also his wife, Mileva Maric, [5] is said to have had some influence on Einstein’s work but how much remains unclear. Only two months earlier on 30 April 1905, Einstein completed his PhD thesis, with Alfred Kleiner, Professor of Experimental Physics, serving as pro-forma advisor at the University of Zurich. His dissertation was entitled “A New Determination of Molecular Dimensions“.

Einsteins third paper reconciled Maxwell’s equations for electricity and magnetism with the laws of mechanics by introducing major changes to mechanics close to the speed of light. This later became known as Einstein’s special theory of relativity. One of the fundamental principles that he gave a proof for was that the speed of light always is fixed, and thus not relative to any movement of an observer. This was impossible under Newtonian classical mechanics. The other of the four groundbreaking papers of this extraordinary year were dealing with the photoelectric effect [1] (actually for this work Einstein was honored with the Nobel Prize in Physics in 1921), with Brownian motion,[2] and the equivalence of matter and energy,[4] which were to bring him to the notice of the academic world.

In 1900, Lord Kelvin,[9] in a lecture titled “Nineteenth-Century Clouds over the Dynamical Theory of Heat and Light“, suggested that physics had no satisfactory explanations for the results of the Michelson–Morley experiment and for black body radiation. As introduced, special relativity provided an account for the results of the Michelson–Morley experiments. Einstein’s theories for the photoelectric effect extended the quantum theory which Max Planck had developed in his successful explanation of black body radiation.

By 1908, Einstein finally was recognized as a leading scientist, and he was appointed lecturer at the University of Bern. In 1909 he quit the patent office as well as the lectureship to take the position of physics docent at the University of Zurich. 1911 he became a full professor at Karl-Ferdinand University in Prague and in 1914 he went to Germany after being appointed director of the Kaiser Wilhelm Institute for Physics (1914–1932) and a professor at the Humboldt University of Berlin, with a special clause in his contract that freed him from most teaching obligations.

Annus mirabilis is a Latin phrase that means “wonderful year”, “miraculous year” or “amazing year”. This term was originally used to refer to the year 1666, and today is used to refer to several years during which events of major importance are remembered. Prior to this, however, Thomas Dekker used the phrase mirabilis annus in his 1603 pamphlet The Wonderful Year, “Wherein is shewed the picture of London lying sick of the plague.” According to the Oxford English Dictionary, the first known written usage of the Latin phrase “Annus Mirabilis” is as the title of a poem composed by English poet John Dryden about the events of 1666. In fact, the year was beset by great calamity for England (including the Great Fire of London)[8], but Dryden chose to interpret the absence of greater disaster as miraculous intervention by God, as “666” was then regarded as the Number of the Beast, and the year 1666 expected by some to be particularly disastrous. In the year 1666, Isaac Newton made revolutionary inventions and discoveries in calculus, motion, optics and gravitation.[7] As such, it has later been called Isaac Newton’s “Annus Mirabilis.”

However, Einsteins four articles in the “annus mirabilis” 1905 contributed substantially to the foundation of modern physics and changed views on space, time, mass, and energy.