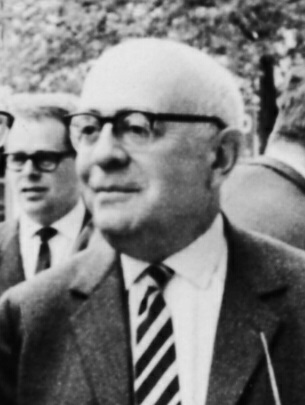 On September 11, 1903, German philosopher and sociologist Theodor W. Adorno was born. Adorno is known for his critical theory of society. He was a leading member of the Frankfurt School of critical theory, whose work has come to be associated with thinkers such as Ernst Bloch, Walter Benjamin, Max Horkheimer, and Herbert Marcuse, for whom the works of Freud, Marx, and Hegel were essential to a critique of modern society. He is widely regarded as one of the foremost thinkers on aesthetics and philosophy in the 20th century.

Adorno was born in 1903 in Frankfurt as Theodor Ludwig Wiesengrund. He was the only child of the wine wholesaler Oscar Alexander Wiesengrund (1870-1946) and the singer Maria Calvelli-Adorno (1865-1952). After skipping two classes, the “privileged high-flyer” passed the Abitur at the age of 17 in 1921 at the Kaiser-Wilhelms-Gymnasium (today Freiherr-vom-Stein-Schule) in Frankfurt as the best pupil in his class. He was trained in philosophy by his 14 years older friend Siegfried Kracauer, whom he had met at a friend of his parents. Kracauer was an important feature editor for the Frankfurter Zeitung. Together they regularly read Immanuel Kant‘s Critique of Pure Reason on Saturday afternoons over the years, an experience that, according to Adorno’s self-testimony, was formative for him.[1]

University Studies in Frankfurt and Vienna

In March 1925 Adorno moved to Vienna, the birthplace of twelve-tone music.  He began postgraduate studies in composition with Alban Berg, Arnold Schönberg‘s pupil, and simultaneously took piano lessons with Eduard Steuermann. Later (1949), he praised Schönberg’s twelve-tone compositions in the Philosophy of New Music. For Adorno, the years of his stay in Vienna were the most intense in terms of composition. Among his compositions, a series of piano song cycles make up the most extensive and weighty part. He also wrote orchestral pieces, chamber music for strings and a cappella choirs and arranged French folk songs.

Music Publishing and Composing in Frankfurt

Back in Frankfurt, he devoted himself to music publishing and composing. Adorno also began work on a habilitation thesis. He processed the results of an extensive study of psychoanalysis in an extensive philosophical-psychological treatise entitled Concept of the Unconscious in Transcendental Psychology, which he presented to his doctoral supervisor Cornelius. After the latter had expressed reservations, which his assistant Horkheimer joined, Adorno withdrew his habilitation application in 1928. Cornelius had complained that the work was too little original and paraphrased his own, Cornelius’ thinking.

The years 1928-1930 were years of professional uncertainty for Adorno. He tried in vain to find a permanent position as a music critic for Ullstein in Berlin. Adorno also concentrated on writing a second habilitation thesis. He had accepted the offer of the Protestant theologian Paul Tillich, newly appointed to a philosophical chair in 1929, to habilitate with him. After writing down the work on the Danish existential philosopher and Hegel critic Kierkegaard within a year, he submitted it under the title Kierkegaard – Construction of the Aesthetic and was thus habilitated at Frankfurt University in February 1931.

After Adorno had been awarded the Venia legendi, he gave his inaugural lecture as a private lecturer in philosophy in May 1931; its title: “The topicality of philosophy“, which contained many thoughts that went into his later complete works. Before his emigration to the USA, Adorno was not yet one of the official collaborators of the Institute for Social Research, but he already published the essay Zur gesellschaftlichen Lage der Musik (On the social situation of music) in the first issue of the Zeitschrift für Sozialforschung published by Horkheimer since 1932. In it, he critically examined the production and consumption of music in contemporary capitalist society.

Adorno’s teaching activities ended in the winter semester of 1933, when the National Socialist regime withdrew his authority to teach academically from his father’s side because of his Jewish ancestry. Like many other intellectuals of his time, he did not expect the new regime to last long and, in retrospect, admitted that he had completely misjudged the political situation in 1933. He went to Great Britain, retaining his officially registered residence in Frankfurt, where, although he was already a German philosophy lecturer, he was accepted only as an advanced student in philosophy at Merton College in Oxford. He planned to earn a Ph.D. with a thesis on the philosophy of Edmund Husserl.

Adorno used the Oxford years not only for his Husserl studies. He wrote a critical treatise on Karl Mannheim‘s sociology of knowledge and articles on music theory for the Viennese music journal 23, which was committed to the avant-garde, as well as the essay Über Jazz, which appeared in 1936 in the Zeitschrift für Sozialforschung under the pseudonym Hektor Rottweiler and caused the most fierce reactions even after Adorno’s death. During this time Adorno maintained an intensive exchange of letters with Max Horkheimer, who was already living in American exile, whom he had met in Paris in December 1935 and visited in New York for two weeks in June 1937. Horkheimer finally made him an offer to take up a scientific activity in the USA that would secure his existence and to become an official member of his Institute for Social Research.

“Tenderness between people is nothing other than awareness of the possibility of relations without purpose.”
— Theodor W. Adorno, Minima Moralia (1951)

Following Horkheimer’s invitation, Adorno and his wife moved to the USA in February 1938 and thus emigrated from Nazi Germany. Upon his arrival, Adorno joined the Princeton Radio Research Project, a major research project led by the Austrian sociologist Paul Lazarsfeld. At the beginning of 1942 Adorno and Horkheimer began to work on the book, which would later bear the title Dialectic of the Enlightenment. With the help of Adorno’s wife Gretel, the main work of Critical Theory was created as a joint effort of the two. It was first published in 1944 by the New York Institute of Social Research in the production process of mimeography under the title Philosophische Fragmente (Philosophical Fragments) and was published in its final form in 1947 by Querido Verlag in Amsterdam.

During these years he also collaborated with Thomas Mann, who for his novel Doctor Faustus received numerous suggestions from Adorno’s manuscript on the philosophy of new music, especially from the first part on Schönberg.[3] After the manuscript of the Dialectic Book – initially titled Philosophical Fragments – had been completed at the beginning of 1944, Adorno entered the large-scale research project on anti-Semitism jointly conducted by the University of Berkeley and the Institute of Social Research. His last position in the USA was as research director of the Hacker Psychiatric Foundation in October 1952, where he conducted content analysis studies on newspaper horoscopes and television series. After getting into conflict with the aggression researcher Friedrich Hacker, he resigned his position and returned to Germany in August 1953.

“Bourgeois society is ruled by equivalence. It makes the dissimilar comparable by reducing it to abstract quantities. To the enlightenment, that which does not reduce to numbers, and ultimately to the one, becomes illusion.”
— Theodor W. Adorno, Dialektik der Aufklärung [Dialectic of Enlightenment] (1944)

According to Adorno, his motivation to return to Germany was subjectively determined by homesickness and objectively by language. He was dependent on the German language, which for him had a “special relationship to philosophy“. He had returned to Frankfurt as a scientist in order to follow up his private lectureship in philosophy at his home university, which he had withdrawn in 1933. Adorno was jointly responsible for the reopening of the Institute for Social Research in the new building in 1951 as deputy director from the very beginning. The Institute was the first academic institution to enable sociology studies in post-war Germany.

After Horkheimer’s retreat to Montagnola in Switzerland, the main work rested on Adorno’s shoulders. In 1958 he officially took over the management of the institute. The scientific productivity that Adorno had developed in the USA in the field of social research contributed to his recognition in Germany in the 1950s and 1960s as one of the most important representatives of German sociology. In addition to his work as a university lecturer and director of the Frankfurt Institute for Social Research, Adorno has written important philosophical writings.  As early as 1951, the collection of aphorisms: Minima Moralia, which he had dedicated to Max Horkheimer and which had been brought back from emigration and expanded, had appeared.

Later Life and the 1968 Student’s Protest

The last years of Adorno’s life have been marked by conflicts with his students. It was Adorno’s students who represented the spirit of revolt and tried to draw “practical consequences” from critical theory. Adorno’s lectures were repeatedly blown up by student activists, a particularly spectacular action was in April 1969, when Hannah Weitemeier and two other students pressed Adorno on the podium with bare breasts and sprinkled him with rose and tulip blossoms.

“When I made my theoretical model, I could not have guessed that people would try to realise it with Molotov cocktails.”
— Theodor W. Adorno, quoted in The Dialectical Imagination : A History of the Frankfurt School and the Institute of Social Research (1973)

In 1969 Adorno was forced to stop his lectures. On 31 January, when students had invaded the Institute for Social Research in order to categorically impose an immediate discussion on the political situation, the directors of the Institute – Adorno and Ludwig von Friedeburg – called the police and reported the occupiers. Adorno, who had always been an opponent of the police and surveillance state, suffered from this breach of his self-image. In the summer of 1969, weary from these activities, Adorno returned once again to Zermatt, Switzerland, at the foot of Matterhorn to restore his strength. On August 6, 1969 Theodor W. Adorno died of a heart attack at age 65.