You are here: Home › literature › Thomas Mann and the illustrious Mann Family 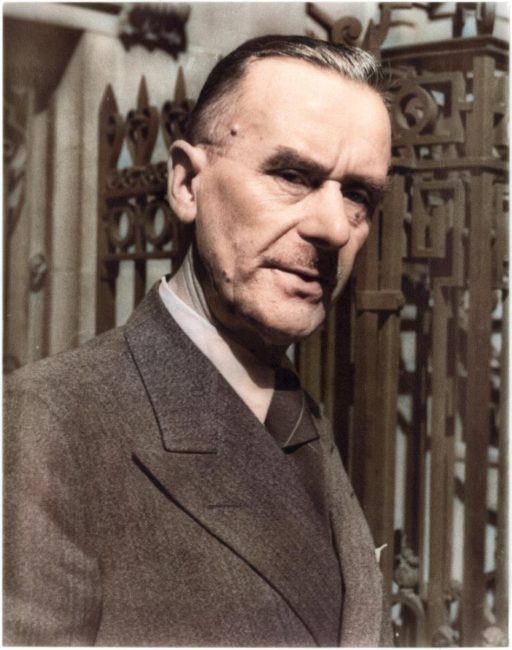 On June 6, 1875, German novelist, short story writer, social critic, philanthropist, and Nobel Laureate Thomas Mann was born. His highly symbolic and ironic epic novels and novellas, are noted for their insight into the psychology of the artist and the intellectual. His older brother was the radical writer Heinrich Mann and three of his six children, Erika Mann, Klaus Mann and Golo Mann, also became important German writers.

“Space, like time, engenders forgetfulness; but it does so by setting us bodily free from our surroundings and giving us back our primitive, unattached state. Yes, it can even, in the twinkling of an eye, make something like a vagabond of the pedant and Philistine. Time, we say, is Lethe; but change of air is a similar draught, and, if it works less thoroughly, does so more quickly.”
– Thomas Mann, The Magic Mountain, (1924)

In Germany, his novells have become a canonical reference. Everybody knows the Buddenbrock family and the story of their decline from a wealthy merchant family to mere insignificance. Or the story of Hans Castorp, the eternal patient of the Magic Mountain, curing his tuberculosis – but in general also his mind – in Switzerland. Or do you know the infamous imposter Felix Krull, Thomas Mann’s last and unfinished novel? Well, let’s have a closer look on this literary giant of the 20th century.

Mann was born Paul Thomas Mann in Lübeck, Germany and was the second son of Thomas Johann Heinrich Mann, a senator and a grain merchant, and his wife Júlia da Silva Bruhns, a Brazilian of German and Portuguese ancestry who emigrated to Germany when seven years old. Mann’s father died in 1891 and his trading firm was liquidated. The family subsequently moved to Munich. Mann attended the science division of a Lübeck Gymnasium (school). After finishing school rather ingloriously, he became a clerk in the office of a Munich insurance company whose director had been a friend of my father’s. Later, by way of preparing for a career in journalism, Thomas Mann studied history, economics, art history and literature at the Ludwig Maximillians University of Munich and Technical University of Munich.

The Start of a Writing Career

The start of his writing career was with a short story ‘Little Mr. Friedemann’ published in 1898. Mann started writing his first novel in 1896 ‘Buddenbrooks’, the a story about a merchant family which grabbed the interest of the public making Mann rich and famous. Buddenbrooks had gone through fifty editions in German before it was translated into English in 1924. American and British critics at the time compared it with John Galsworthy’s The Forsyte Saga.  Based on Mann’s own family, Buddenbrooks relates the decline of a merchant family in Lübeck over the course of four generations. What made Buddenbrooks particularly interesting to the literary student was the fact that the author, showing the social decline of a Luebeck Senatorial family, wove much of his own family history into the story.

From Death in Venice to The Magic Mountain

His reputation as a writer escalated with his novel ‘Death in Venice’ published in 1912. This book described the experiences of a writer who goes to Venice and falls in love with a young boy. Many of his works revolved around homosexual themes. However, Mann married Katia Pringsheim, who belonged to a strong wealthy Jewish background, and they had six children. In 1924, Mann finally published what many consider to be his greatest work, The Magic Mountain. The novel is set in a tuberculosis sanatorium in the Swiss Alps, a community that represents a microcosm of Europe directly before World War I. The protagonist, a healthy young man, comes to the sanatorium for a short visit, but ends up staying for seven years. Eventually, he finds fulfillment by leaving the community. The novel typifies the style that Mann is best known for: ironical, somber, and symbolic. Mann’s vast composition is erudite, subtle, ambitious, but, most of all, ambiguous; since its original publication it has been subject to a variety of critical assessments. For example, the book blends a scrupulous realism with deeper symbolic undertones. Given this complexity, each reader is obliged to interpret the significance of the pattern of events in the narrative, a task made more difficult by the author’s irony. Mann was well aware of his book’s elusiveness, but offered few clues about approaches to the text. He later compared it to a symphonic work orchestrated with a number of themes. In a playful commentary on the problems of interpretation, he recommended that those who wished to understand it should read it through twice.

The Nobel Prize in Literature of 1929

The Nobel Prize for Literature was no surprise for Mann. Years before it had been speculated that he could get it, he himself had already hoped for it in 1927. In the afternoon of November 12, 1929, the news reached him from Stockholm. He was dismayed that the committee practically only referred to his first novel. Responsible for this was first and foremost the influential Stockholm royal maker, the Swede Fredrik Böök, who was unable to hold the novel The Magic Mountain in high esteem and had torn it apart several times.

Joseph and his Brothers – Emigration to Switzerland

In 1929, Mann had a cottage built in the fishing village of Nidden (Nida, Lithuania) on the Curonian Spit, where there was a German art colony and where he spent the summers of 1930–1932 working on Joseph and His Brothers, a tetralogy on the history of the biblical character. In 1933, while traveling in the South of France, Mann heard from his children Klaus and Erika in Munich, that it would not be safe for him to return to Germany. When they emigrated from Germany in 1933, they lost a large part of their assets, namely their real estate and other property. The family (except the two oldest children) emigrated to Küsnacht, near Zurich, Switzerland but received Czechoslovak citizenship and a passport in 1936.

He then emigrated to the United States in 1939, where he taught at Princeton University. The final move of Thomas Mann and his family to the USA coincided with the Berchtesgaden Agreement, which was to lead to the annexation of Austria to the Nazi state in March 1938. Upon his arrival in New York on February 21, 1938, reporters therefore asked him for a statement on this development and asked him whether he felt the exile was a heavy burden. His answer was printed the next day in the New York Times:

“It is hard to bear. But what makes it easier is the realization of the poisoned atmosphere in Germany. That makes it easier because it’s actually no loss. Where I am, there is Germany. I carry my German culture in me. I have contact with the world and I do not consider myself fallen.”

Although Mann was not a political writer, he was forced to move on a number of occasions for political reasons. He taught at Princeton University in New Jersey for two years, but moved to Pacific Palisades, California to join an expatriate community of German intelligentsia including the composer Arnold Schoenberg, dramatist Berthold Brecht, and Mann’s own brother, Heinrich. In his famous Doctor Faustus (1947), Mann retold the famous myth as a composer who sells his soul to the devil in return for fame. Based on his friend, composer Arnold Schoenberg, the work expresses Mann’s despair over German Nazism. During the war, Mann made a series of anti-Nazi radio-speeches, published as Listen, Germany!. They were recorded on tape in the United States and then sent to Great Britain, where the BBC transmitted them, hoping to reach German listeners.

Moving Back to Europe

After World War II, during the McCarthy era, Mann grew disillusioned with American politics and moved back to Europe in 1952. He never again lived in Germany, though he regularly traveled there. His most important German visit was in 1949, at the 200th birthday of Johann Wolfgang von Goethe, attending celebrations in Frankfurt am Main and Weimar, as a statement that German culture extended beyond the new political borders.  On August 12, 1955, Thomas Mann died at the age of eighty in the Zurich Cantonal Hospital from a rupture of the lower abdominal artery (aorta abdominalis) due to arteriosclerosis.

Doctor Faustus and Confessions of an Impostor

“What a glorious gift is imagination, and what satisfaction it affords!”
– Thomas Mann, Confessions of Felix Krull, Confidence Man (1954)

The novel Doctor Faustus was written between 1943 and 1947, in which the narrator Serenus Zeitblom describes the life story of composer Adrian Leverkühn against the background of the Second World War, which he symbolically relates to German history. Nietzsche‘s biography provided the material and Theodor W. Adorno the musical basis, especially for the description of modern twelve-tone music. The remaining fragment of the novel Bekenntnisse des Hochstaplers Felix Krull (Confessions of the impostor Felix Krull, 1954), Thomas Mann’s last novel, is a kind of picaresque novel and plays an exceptional role in the poet’s opus. The impostor novel was planned as a parody of Goethe’s autobiography Poetry and Truth. Thomas Mann strove for a travestering transfer of artistry to the fraudulent criminal and moved the artist humorously close to the impostor. The work parodies the classic educational and developmental novel as well as the memoir literature.