You are here: Home › mathematics › Gottlob Frege and the Formula Language of Pure Thinking 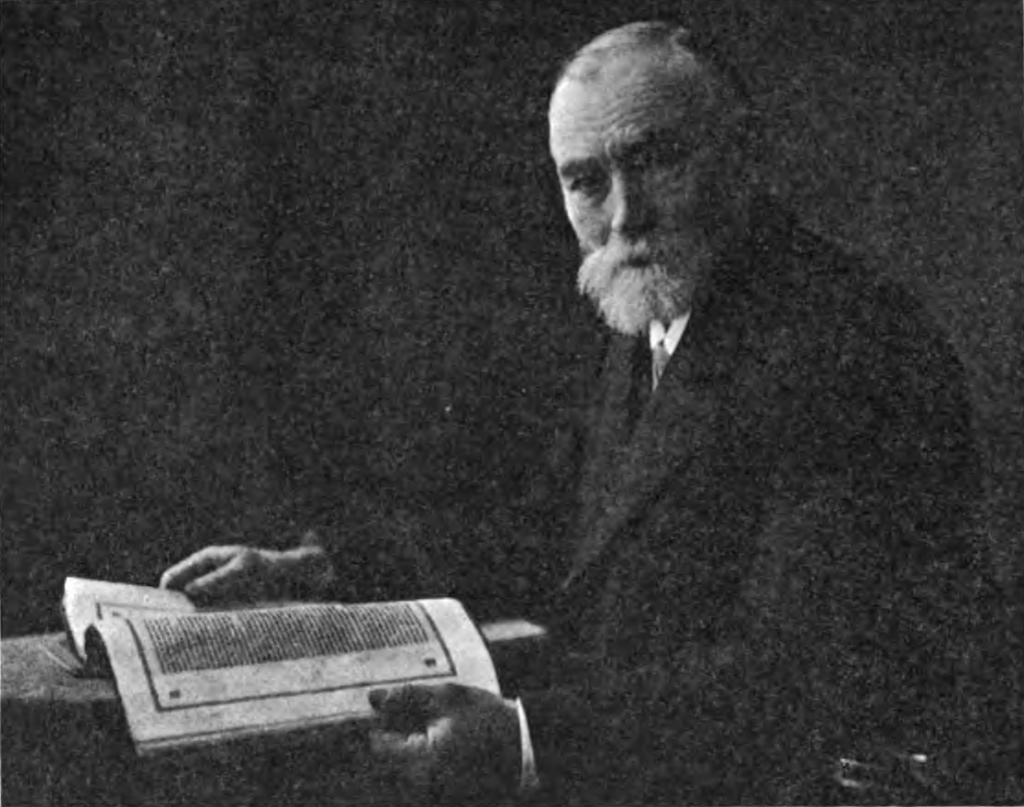 On November 8, 1848, German mathematician, logician and philosopher Gottlob Frege was born. He is considered as one of the fathers of modern mathematical logic and has developed the Begriffsschrift, an approach to put classical philosophical logic into a formal mathematical language. While he was mainly ignored by the intellectual world when he published his writings, Giuseppe Peano [7] and Bertrand Russell [8] introduced his work to later generations of logicians and philosophers. Unless you are a mathematician, a computer scientist dedicated to mathematical logics, or a philosopher of logics, you might have probably never heart of Gottlob Frege. I learned about Gottlob Frege, when I was working as a postdoc researcher at the University of Jena, Germany, because Gottlob Frege was one of the historical (scientific) heroes of the University of Jena. Nevertheless, he had to struggle for many years with the university to get his professorship fully acknowledged, but this is another story. Let’s get back to Frege and his achievements in mathematics and logics.

Gottlob Frege was born on November 8, 1848 in Wismar, in the state of Mecklenburg-Schwerin as son of Carl Alexander Frege, the headmaster of a girls’ high school, and Auguste Wilhelmine Sophie Frege. Already in childhood, Frege encountered philosophies that would guide his future scientific career as his father wrote a textbook on the German language for children aged 9–13, the first section of which dealt with the structure and logic of language. Gottlob Frege visited the gymnasium in Wismar and graduated in 1869. Encouraged by his teacher Leo Sachse, Frege went to the University of Jena. By that time, Europe went through a lot of changes during the two years that he studied there. Prussia led the German states to victory over France in the Franco-Prussian War of 1870-71 and in 1871 the German Reich (German Empire), with William I of Prussia as its emperor, came into existence. 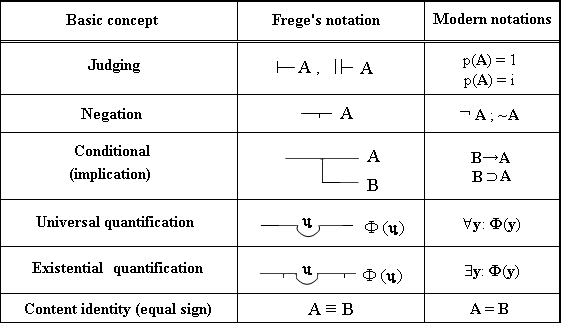 At Jena Frege was taught by Ernst Abbe [9] and after two years Frege continued his education entering the University of Göttingen in 1871 where he studied courses in mathematics, physics, chemistry and philosophy. He attained his doctorate in 1873 from Göttingen. Frege’s most important contribution to mathematics was in the field of logics. His “Begriffsschrift, eine der arithmetischen nachgebildete Formelsprache des reinen Denkens” (Concept-Script: A Formal Language for Pure Thought Modeled on that of Arithmetic) in 1879 marked a turning point in the history of logic. It broke new ground, including a rigorous treatment of the ideas of functions and variables. Frege wanted to show that mathematics grows out of logic, but in so doing, he devised techniques that took him far beyond the Aristotelian syllogistic and Stoic propositional logic that had come down to him in the logical tradition.

Frege invented axiomatic predicate logic, in large part thanks to his invention of quantified variables, which eventually became ubiquitous in mathematics and logic, and which solved the problem of multiple generality. While the existing logic had dealt with the logical constants only and operators like and, or, if… then…, not, especially notions like ‘some’ and ‘all’, including iterations of these operations, were little understood. The analysis of logical concepts and the machinery of formalization developed by Frege was the essential foundation for Bertrand Russel’s Principia Mathematica, as well as for Kurt Gödel‘s incompleteness theorems.[10]

“A judgment, for me is not the mere grasping of a thought, but the admission of its truth.” (Gottlob Frege, On Sense and Reference, 1892)

Besides his mathematical achievements, Frege also distinguished himself as a philosopher. He is one of the founders of analytic philosophy, mainly because of his contributions to the philosophy of language. Frege was described by his students as a highly introverted person, seldom entering into dialogue, mostly facing the blackboard while lecturing though being witty and sometimes bitterly sarcastic. Frege retired from his professorship in Jena in 1917.

In the years that followed, Frege fell into a depression, which manifested itself, among other things, in the fact that he no longer published any major works. Only after his retirement did a series of three interrelated logical investigations appear again: Der Gedanke (The Thought, 1918), Die Verneinung (The Negation, 1918), and Gedankengefüge (Thought Structure, 1923). He had at least partially overcome his life crisis. In his part of his diary (for 1924) published in 1994 from his estate, there are anti-democratic, anti-Catholic, anti-French, and anti-Semitic remarks; publicly, however, Frege probably never made any political appearances. In 1923 Frege came to the conclusion that his original aim throughout most of his career, namely to found arithmetic on logic, was wrong. He decided instead that one had to base the whole of mathematics on geometry, but was not able to finish his work before his death in 1924. Frege spent his twilight years in Bad Kleinen, near his native town of Wismar.