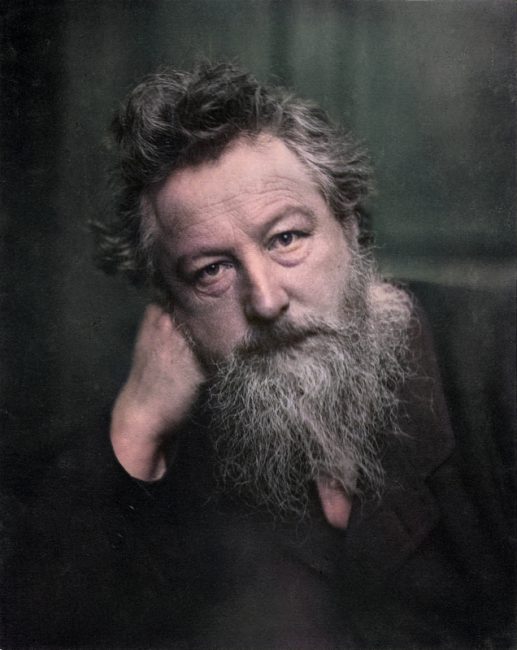 On March 24, 1834, British textile designer, poet, novelist, translator, and socialist activist associated with the British Arts and Crafts Movement William Morris was born. He was a major contributor to the revival of traditional British textile arts and methods of production. His literary contributions helped to establish the modern fantasy genre, while he played a significant role proliferating the early socialist movement in Britain.

“If you want a golden rule that will fit everybody, this is it: Have nothing in your houses that you do not know to be useful, or believe to be beautiful.”
– William Morris, The Beauty of Life, 1880

William Morris was born in Elm House in Walthamstow near London, UK, at that time still a small village on the other side of the big city. His father was a partner in a stockbrokerage firm and left the family a large fortune after his death in 1847. The childhood of William Morris was happy, but he did not yet show his artistic talent. At the age of 13, Morris attended the newly founded boarding school Marlborough College, which attached great importance to freedom and paid less attention to discipline. There he learned needlework and came into contact with the High Church movement. He left Marlborough College with the intention of studying theology and becoming a priest. With the spring term of 1853 William Morris began studying at Exeter College, University of Oxford, where teaching and discipline were not taken very seriously at that time. His tutor denied William Morris any literary taste and did not consider him to be very intelligent.

William Morris was enthusiastic about the city of Oxford, but he did not appreciate the university. In the first semester he became friends with Edward Burne-Jones, who remained his closest friend during his studies, since neither of them had much in common with their fellow students. Burne-Jones introduced Morris to his former classmates from King Edward’s Grammar School in Birmingham, who were studying at Pembroke College and in whose company he felt comfortable. There he was influenced by the ideas of John Ruskin [1] and made friends not only with Burne-Jones but also with Dante Gabriel Rossetti, Ford Madox Brown, and Philip Webb. He also met Jane Burden, his future wife, who was from the working class. Her pale skin and copper-red hair were regarded by Morris and his friends as a sign of outstanding beauty, which later found expression in portraits of Morris and Dante Gabriel Rossetti.

When they moved to London in 1856, Morris (nicknamed “Topsy”) and Edward Burne-Jones (called “Ned”) took over the Red Lion Square premises that Rossetti had shared with Walter Deverell. Since there was no furniture, Morris set about designing tables, chairs, cupboards and a bench, which a carpenter then made on site. Rossetti described it as “strongly medieval” and persuaded Burnes-Jones and Morris to decorate it with their paintings. Rossetti also contributed designs. This growing interest in the craftsmanship of the individual eventually led to the company Morris & Co

“I love art, and I love history, but it is living art and living history that I love… It is in the interest of living art and living history that I oppose so-called restoration. What history can there be in a building bedaubed with ornament, which cannot at the best be anything but a hopeless and lifeless imitation of the hope and vigour of the earlier world?”
– William Morris, The History of Pattern-Designing, 1882

Morris and Burne-Jones were already part of the successor generation of the Pre-Raphaelite Brotherhood. They rejected industrial design and architecture and sought a return to individual handwork; they saw the craftsman as an artist. With this they founded the Arts and Craft movement. William Morris was first employed in an architect’s office, but then became increasingly attracted to interior design and decoration. Together with Philip Webb, he built the Red House in Bexleyheath, Kent, his wedding present for Jane. It was here that his design ideas began to take shape.

The Defense of Guenevere

In 1858, his first collection of poems appeared under the title The Defense of Guenevere and other Poems. This was the first ever publication of poems by the English Pre-Raphaelites, which at first were either ignored or sharply criticized by the critics. During the 1860s, Morris began work on a more comprehensive body of poetry, published in four volumes under the title The Earthly Paradise between 1868 and 1870, based on the structure of Geoffrey Chaucer‘s Canterbury Tales.[2] This successful four-volume collection established Morris’s reputation as a renowned poet and led to two nominations for the prestigious position of Professor of Poetry at Oxford in 1877 on the one hand and the succession of Alfred Tennyson as poet laureate on the other. However, Morris rejected both of these appointments.[3]

“Masters, I have to tell a tale of woe,
A tale of folly and of wasted life,
Hope against hope, the bitter dregs of strife,
Ending, where all things end, in death at last.”
– William Morris, The Earthly Paradise (1868-1870)

Central sources of material in Morris’ poetic work are the medieval world and various mythological collections. His strong interest in mythology is also evident in his numerous prose translations of Sagas from Icelandic since 1869 and of Beowulf in 1895, as well as in his translations of Virgil‘s Aeneis  in 1876 and Homer‘s Odyssey in 1887. As in his immersion in the old forms of craftsmanship, Morris’s literary work reflects an effort to bring old forms, texts and materials back to life and develop them further. 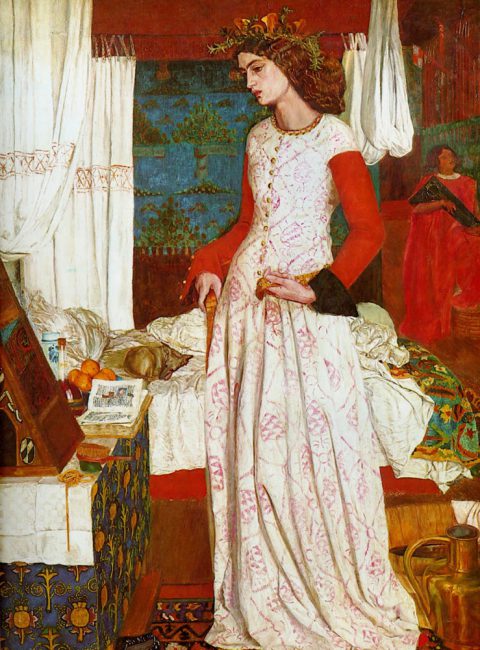 Morris’s 1858 painting La belle Iseult, also inaccurately called Queen Guinevere, is his only surviving easel painting, now in the Tate Gallery. The model is Jane Burden, who married Morris in 1859.

Like many of his contemporaries, Morris knew and loved life in the country. He loved fishing in the Thames, and especially flowers and birds, which appear in many of his works – but he was also happy when he shot them to pieces with his rifle. He had a violent side and in his uncontrollable outbursts of rage, which almost led to a black-out, probably manifested the epileptic genes on his mother’s side, which later tragically came to light in his daughter Jenny.

In 1861 he founded the company Morris, Marshall, Faulkner & Co., which produced furniture, wall decorations and stained glass. In the 1870s, Morris again devoted himself equally to his literary work. In 1873, he wrote his verse drama Love is Enough or the Freeing of Pharamond, A Moralitym, which took the form of the pre-Elizabethan drama, A Moralitym, with the adaptation of a story from the Welsh Mabinogion, and a rewriting of the Icelandic Völsunga saga, The Story of Sigurd the Volsung and the Fall of the Niblungs, which he had translated into English in 1870 and whose material he had used earlier in The Earthly Paradise. 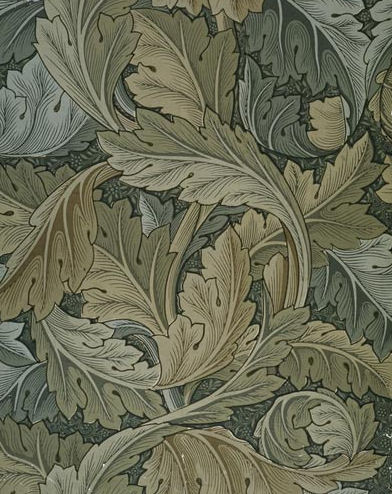 William Morris’s earliest experiments in making hand-knotted carpets date from 1878, when he set up looms on the Morris & Co. property at 26 Queen Square, Bloomsbury. Within a year he had equipped the former coach house of his Kelmscott House in Hammersmith with larger looms and employed a team of 6 women to knot the rugs. About 100 carpets were made to Morris and Dearle’s designs. In the early 1890s, due to his progressive gout, he limited his involvement in the socialist movement. Parts of the Victorian public interpreted this withdrawal due to illness as a distancing from socialism and a return from political aberrations to his true artistic vocation. Morris’s own statements, however, do not confirm this view. 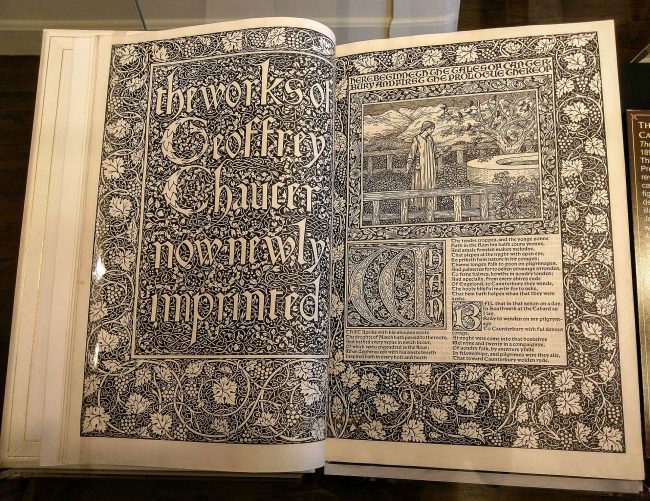 The title pages of “The works of Geoffrey Chaucer now newly imprinted”, published by Kelmscott Press in 1896 designed by William Morris

Morris’s fairy-tale novel The Wood Beyond the World had a strong influence on C. S. Lewis Narnia books.[4] J. R. R. Tolkien‘s work also shows dependencies on Morris’ depictions of early Germanic life,[5] such as in The House of the Wolfings or The Roots of the Mountains. In January 1891 William Morris founded the Kelmscott Press in Hammersmith near London to produce high quality books. He designed printing types like his “Golden Type”, which was influenced by the early Venetian printer Nicolas Jenson. The decorations followed medieval woodcuts of the 15th century. The choice of paper and printing inks as well as the sense for the entire print product made the Kelmscott Press the most famous private printer of its time. Until its closure in 1898, it produced 53 book editions. Today, Geoffrey Chaucer’s edition of the Canterbury Tales, also known as “Kelmscott Chaucer”, is considered one of the finest books ever produced. The Kelmscott Press has influenced many subsequent private printers.

Together with Walter Crane and Dante Gabriel Rossetti, Morris was one of the most important members of the Arts and Crafts Movement. William Morris died in 1896 and was buried in the Kelmscott cemetery in Oxfordshire.