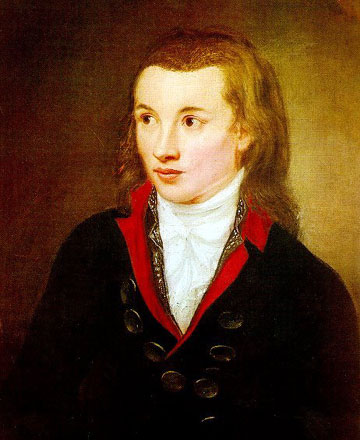 On March 25, 1801, poet, author, and philosopher of early German Romanticism Georg Philipp Friedrich Freiherr von Hardenberg, better known under his pen name Novalis passed away. In spite of his early death at age 28, Novalis left behind a complex philosophical legacy that encompasses discussions of subjectivity and self-consciousness, issues in epistemology, moral theory, political philosophy, problems of interpretation, philosophy of history, philosophy of religion, the proto-existentialist experience of the finality of human life, as well as a significant contribution to aesthetics and philosophy of art.

“To romanticize the world is to make us aware of the magic, mystery and wonder of the world; it is to educate the senses to see the ordinary as extraordinary, the familiar as strange, the mundane as sacred, the finite as infinite.”
– Novalis, as quoted in [13]

Georg Philipp Friedrich von Hardenberg was born in 1772 at Oberwiederstedt manor, now part of Arnstein, Saxony-Anhalt, in the Harz mountains, as second of eleven children to his strictly pietistic father Heinrich Ulrich Erasmus Freiherr von Hardenberg, descended from ancient, Low German nobility. He spent his childhood on the family estate and used it as the starting point for his travels into the Harz mountains. First taught by private tutors, he attended the Lutheran grammar school in Eisleben. From the age of twelve, he moved to the home of his uncle, Gottlob Friedrich Wilhelm von Hardenberg, who is said to have taken an interest in French enlightenment philosophy.

From 1790 to 1794, he studied law at Jena, Leipzig and Wittenberg, where he passed his exams with distinction. In Jena, he attended the lectures of Friedrich Schiller [5] on history and later befriended Schiller during his illness. During these years, he also met Johann Wolfgang Goethe,[6] Johann Gottfried Herder [11] as well as Jean Paul, and made close friends with Ludwig Tieck, the brothers Friedrich and August Wilhelm Schlegel [7] and Friedrich Wilhelm Joseph Schelling.[12] Von Hardenberg passed his final exams in 1794 and moved on to work in the Prussian civil service in Tennstedt, where he also met the young Sophie von Kühn, with whom he got secretly engaged in 1795. Two years later, Sophie tragically died at the age of fifteen, an event that would move a whole generation of poets and artists in Germany, including Goethe.[1]

Mining and The Religion of Love

Following in his father, von Hardenberg commenced his studies of mining in Freiberg, Saxony, and eventually took up an administrative position at the salt mines in Weißenfels, where he advanced to director of the salt mines. Until 1796, von Hardenberg concerned himself with the scientific teachings of Johann Gottlieb Fichte,[8] which greatly influenced his world view. He even extended Fichte’s philosophic concepts by transforming Fichte’s Nicht-Ich (German “not I”) to a Du (“you”), an equal subject to the Ich (“I”). This was the starting point for von Hardenberg’s Liebesreligion (“religion of love”).

Becoming Novalis – Hymns to the Night

“Men travel in manifold paths: whoso traces and compares these, will find strange Figures come to light; Figures which seem as if they belonged to that great Cipher-writing which one meets with everywhere”
– Novalis, Pupils at Sais (1799)

Von Hardenberg’s first fragments were published in 1798 in the Athenäum, a magazine edited by the brothers Schlegel, who were also part of the early German Romantic movement. His first publication was entitled Blüthenstaub (Pollen), a collection of 114 aesthetic-philosophical fragments and reflections, and saw the first appearance of his pen name “Novalis” – referring back to an old family name while, all the same, conveying the meaning of “the one who clears new ground”.[1] Still deeply affected by the death of his young fiancee Sophie von Kühn, Novalis began his Hymnen an die Nacht (Hymns to the Night), which were published in 1800. In these six prose poems interspersed with verse he recounted his experience of Sophie’s death. He celebrates night, or death, as an entry into a higher life in the presence of God and his conversion to a kind of Christian mysticism in which he longed for his own death in order to be reunited with his beloved.

Novalis became engaged for the second time in December 1798 with Julie von Charpentier. Unfortunately, he lived long enough to see the publication only of his works. His unfinished novels Heinrich von Ofterdingen and The Novices at Sais, his political speech Christendom or Europa, and numerous other notes and fragments were published posthumously by his friends Ludwig Tieck and Friedrich Schlegel.

“..to philosophize is to throw off apathy, to become revived.” (Novalis, Studies in the History of the Renaissance)

On the December 6, 1800, the twenty-eight-year-old Novalis was appointed “Supernumerar-Amtshauptmann” for the district of Thuringia, a position comparable to that of a present-day magistrate. But from August onward, he suffered from tuberculosis, and on March 25, 1801, he died in Weißenfels. Novalis’s last years were incredibly creative, filled with encyclopaedic studies, the draft of a philosophical system based on idealism, and poetic work. His mythical romance Heinrich von Ofterdingen, set in an idealized vision of the European Middle Ages, describes the mystical and romantic searchings of a young poet. The central image of his visions, a blue flower, became a widely recognized symbol of Romantic longing among Novalis’s fellow Romantics. [3] The core of Novalis’ literary works is the quest for the connection of science and poetry, and the result was supposed to be a “progressive universal poesy”. He was convinced that philosophy and the higher-ranking poetry have to be continually related to each other. Novalis’ poetry and writings were also an influence on Hermann Hesse. Moreover, he also influenced indirectly C. S. Lewis, the Inklings, and the whole modern fantasy genre with his work.

At yovisto academic video search you can learn more about a fellow author of early German Romanticism, Friedrich Hölderlin, in the presentation of Prof. Richard Capobianco on “Heidegger on Hölderlin’s ‘Nature Gleaming‘“.