You are here: Home › psychology › Erich Fromm and the Frankfurt School of Critical Theory 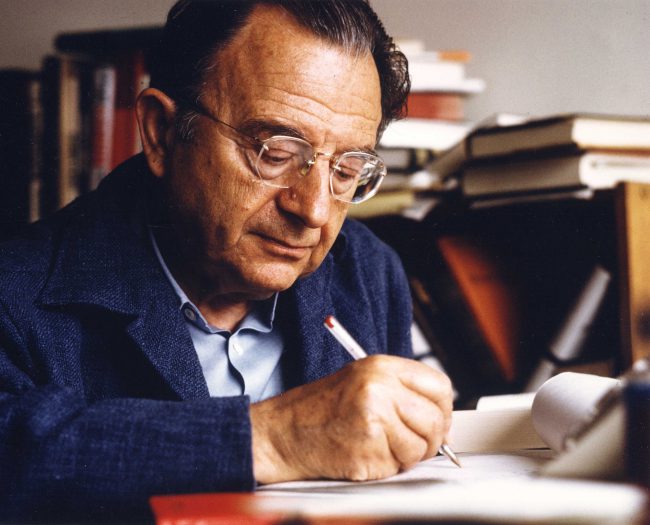 On March 23, 1900, German-American psychologist Erich Seligmann Fromm was born. He was associated with what became known as the Frankfurt School of critical theory. Fromm’s writings were notable as much for their social and political commentary as for their philosophical and psychological underpinnings. Although influenced by Sigmund Freud’s theories [4,5,6], Fromm diverged in thinking that beyond the unconscious alone, conditions of the society and economy affect human behavior.

“The application of psychoanalysis to sociology must definitely guard against the mistake of wanting to give psychoanalytic answers where economic, technical, or political facts provide the real and sufficient explanation of sociological questions. On the other hand, the psychoanalyst must emphasize that the subject of sociology, society, in reality consists of individuals, and that it is these human beings, rather than abstract society as such, whose actions, thoughts, and feelings are the object of sociological research.”
– Erich Fromm, “Psychoanalyse und Soziologie” (1929)

Erich Fromm was born in 1900 and received a rather traditional education. He started out with sociology, but later developed his true passion in psychology. In 1918, he enrolled at the University of Frankfurt am Main and switched to Heidelberg in 1919. In the field of sociology, Fromm studied under Alfred Weber, Karl Jaspers, and Heinrich Rickert. He received his PhD in sociology in 1922 and trained to become a psychoanalyst though Frieda Reichmann‘s psychoanalytic sanatorium in Heidelberg. Fromm started his clinical practice in 1927 and joined the Frankfurt Institute for Social Research three years later.

Emigration to Switzerland and the USA

As soon as the Nazi-Party took over Germany, Fromm left and moved first to Geneva, but began working at Columbia University in New York in 1934. He belonged to the Neo-Freudian school of psychoanalytical thought along with Karen Horney [8] and Harry Stack Sullivan. After leaving Columbia, Fromm helped form the New York branch of the Washington School of Psychiatry in 1943, and in 1946 co-founded the William Alanson White Institute of Psychiatry, Psychoanalysis, and Psychology. Erich Fromm was appointed professor at the National Autonomous University of Mexico in 1949, where he established a psychoanalytic section at the medical school. He also taught as a professor of psychology at Michigan State University from 1957 to 1961 and as an adjunct professor of psychology at the graduate division of Arts and Sciences at New York University after 1962.

The famous term ‘Frankfurt School‘ stood for the thinkers who were affiliated with the Frankfurt Institute for Social Research. The Frankfurt School can be traced back to Felix Weil, who wrote about the problems of implementing socialism. A discussion group evolved surrounding Weil and together, they established the institute. In 1930, Max Horkheimer became the institute’s director and recruited Theodor W. Adorno, Erich Fromm, and Herbert Marcuse.

The Objectives of Critical Theory

Max Horkheimer outlined the objectives of critical theory in the 1930s with the goal to analyze the true significance of “the ruling understandings generated in bourgeois society, in order to show how they misrepresented actual human interaction in the real world, and in so doing functioned to justify or legitimize the domination of people by capitalism“.

The Art of Loving

In The Art of Loving (1956), In this work, Erich Fromm developed his perspective on human nature, from his earlier work, Escape from Freedom and Man for Himself – principles which he revisits in many of his other major works. Fromm presents love as a skill that can be taught and developed, rejecting the idea of loving as something magical and mysterious that cannot be analyzed and explained. He is therefore skeptical about popular ideas such as “falling in love” or being helpless in the face of love. For most people the problem with love is to be loved and not in their own ability to love. According to Fromm, these people’s desire to be lovable is essentially a mixture of striving for popularity and sex appeal. In addition, most people viewed the problem of loving more as the problem of the loved or unloved object rather than their own ability or inability to love. Fromm attributes this, among other things, to the change in the Western world’s understanding of love in the 20th century, during which the concept of romantic love became widely accepted.

To Have or to Be

In 1976 Fromm published one of his most popular books, To Have or to Be?, in which he differentiates between having and being. Fromm writes that modern society has become materialistic and prefers “having” to “being”. He mentions the great promise of unlimited happiness, freedom, material abundance, and domination of nature. These hopes reached their highs when the industrial age began. One could feel that there would be unlimited production and hence unlimited consumption. Human beings aspired to be Gods of earth, but this wasn’t really the case. The great promise failed due to the unachievable aims of life, i.e. maximum pleasure and fulfillment of every desire (radical hedonism), and the egotism, selfishness and greed of people. In the industrial age, the development of this economic system was no longer determined by the question of what is good for man, but rather of what is good for the growth of the system. So, the economic system of society served people in such a way in which only their personal interests were intended to impart. The people having unlimited needs and desires like the Roman emperors, the English and French noblemen were the people who got the most out of it.

From 1957 Fromm participated in the American peace movement. The FBI kept a 600-plus-page file on him. Fromm retired in 1965; in 1974 he moved to Muralto, Canton Ticino, Switzerland. Fromm suffered heart attacks in 1966, 1977 and 1978. As a result of another heart attack, he died in 1980, a few days before his 80th birthday and before the publication of the ten-volume complete edition of his works.