You are here: Home › physics › Sir William Henry Bragg and his Work with X-Rays 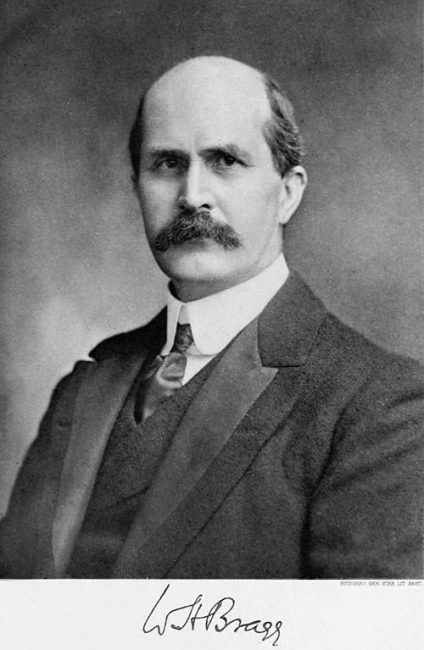 On July 2 1862, British physicist, chemist, mathematician, active sportsman and Nobel Laureate Sir William Henry Bragg was born. Bragg shared the 1915 Nobel Prize in physics with his son William Lawrence Bragg [3] “for their services in the analysis of crystal structure by means of X-rays“. During the WW I, Bragg was put in charge of research on the detection and measurement of underwater sounds in connection with the location of submarines. He also constructed an X-ray spectrometer for measuring the wavelengths of X-rays and initiated X-ray diffraction studies of organic molecules.

“On Mondays, Wednesdays, and Fridays we use the wave theory; on Tuesdays, Thursdays, and Saturdays we think in streams of flying energy quanta or corpuscles.”
— William Henry Bragg, in Electrons & Ether Waves : being the twenty-third Robert Boyle lecture, on 11th May 1921, Oxford University Press, 1921, p. 11.

William Henry Bragg was born at Westward, England, near Wigton, Cumberland, the son of Robert John Bragg, a merchant marine officer and farmer, and his wife Mary née Wood, a clergyman’s daughter. When Bragg was seven years old, his mother died, and he was raised by his uncle, also named William Bragg, at Market Harborough, Leicestershire. Bragg attended King William’s College, Isle of Man and was elected a minor scholar of Trinity College, Cambridge, in 1881. He studied mostly mathematics under the well-known teacher, Dr. E. J. Routh. Bragg was Third Wrangler in the Mathematical Tripos, Part I, in June 1884, and was placed in the first class in Part II. In 1885, Bragg studied physics in the Cavendish Laboratory and was then – at age 25 – appointed Professor of Mathematics and Physics at the University of Adelaide, South Australia and subsequently became Cavendish Professor of Physics at Leeds, Quain Professor of Physics at University College London, and Fullerian Professor of Chemistry at the Royal Institution.

William Bragg’s scientific interests are known to have been diverse and he often picked up a subject, successfully contributed to the field and then dropped the topic again. Starting from 1909, William Henry Bragg was occupied at University of Leeds. In his scientific work Bragg was concerned with phenomena of radioactivity and X-rays. For example, the scientist investigated the absorption and ionisation behaviour of ionising radiation as a function of the distance between the radiation source and ionised matter. He invented the X-ray spectrometer and with his son, William Lawrence Bragg, then a research student at Cambridge founded a new branch of science of the greatest importance and significance, the analysis of crystal structure by means of X-rays. In 1913 Bragg and his son Lawrence developed the Bragg spectrometer method based on X-ray diffraction, which was initially used to determine X-ray spectra, but later also to determine crystal structures. Using this method, the physicists succeeded in clarifying the atomic structure of some minerals and alloys and in determining the wavelength of X-rays. The focus was on the Bragg equation established by the researchers and named after them, which represents the relationship between the diffraction angle Θ, the wavelength λ of the X-ray beam and the interplanar distance d: nλ = 2d sin Θ.

Starting from 1914, the Bragg’s contributed to the war effort working for the British admirality and William Henry was even connected with submarine detection, at Aberdour on Forth and at Harwich, and returned to London in 1918 as a consultant to the admiralty. In 1915, both, father and son were awarded the Nobel Prize in Physics for their studies, using the X-ray spectrometer, of X-ray spectra, X-ray diffraction, and of crystal structure. Ten years later, their successful volume X-Rays and Crystal Structure had reached a fifth edition.

William Henry Bragg was knighted in 1920 and awarded the Order of Merit in 1931. After having been a Fellow since 1907, he was elected President of the Royal Society in 1935. From 1923 Bragg was Professor of Chemistry at the Royal Institution in London, and from 1935 to 1940 he headed the Royal Society. To his most important written works belong ‘Studies in Radioactivity‘, ‘X-Rays and Crystal Structure‘, ‘The World of Sound‘, ‘An Introduction to Crystal Analysis‘, and many more.

At yovisto academic video search, you can learn more about x-rays in a video lecture.