You are here: Home › computer science › Robert Ledley and the Computer Tomograph 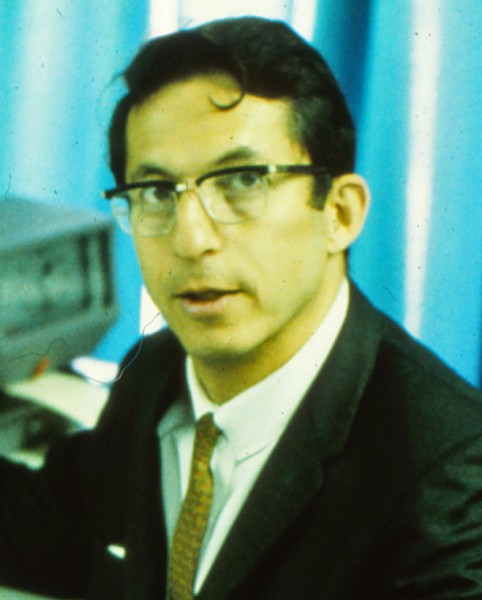 On June 28, 1926, American computer scientist Robert Steven Ledley was born. Ledley pioneered the use of electronic digital computers in biology and medicine. He invented the ACTA (Automatic Computerized Transverse Axial) diagnostic X-ray scanner, the first whole-body computerized tomography (CT) machine, which revolutionized medical diagnosis. Conrad Roentgen‘s discovery of the “x-rays” already was a sensation in 1895, which revolutionized medical diagnostics. The CT-scan led another step further to more thorough and complete diagnostics thanks to higher resolution and 3D-scan techniques. Nearly every field of medicine has been affected by the whole-body CT scanner. During a CT scan, usually you have to lie still on a table. Then the table slowly passes through the center of a large X-ray machine. A scary procedure for many, but the test of course is painless. During some tests you receive a contrast dye, which makes parts of your body show up better in the image. Today, doctors use CT scans to look for broken bones, cancers, blood clots, signs of heart disease, internal bleedings, and more. Let’s have a look at the man behind this invention.

Robert Ledley was born in Flushing Meadows, Queens, New York City, USA. to Joseph Levy, an accountant and his mother, Kate Levy, a schoolteacher. Ledley attended the Horace Mann School, from which he graduated in 1943. As an undergraduate student at Columbia University Ledley excelled in physics. However, his parents objected to his desire to become a physicist on the grounds that a career in physics would not be feasible for him given the scarcity of steady jobs in that field. Instead, they urged him to becomes a dentist. Ledley attempted to follow both paths at once; he enrolled in the New York University College of Dentistry while continuing to pursue his education in physics at Columbia. After receiving his DDS from NYU in 1948, Ledley became a physics graduate student at Columbia and earned his MS in physics in 1950. His professors included the Nobel Prize winners Enrico Fermi, Hans Bethe and I. I. Rabi.

In 1951, during the Korean War, Ledley was in the Army Dental Corps, assigned to a research unit at Walter Reed Army Medical Center in Washington, where he worked on improving prosthetic dental devices.[1] After his discharge from the Army, he went to work in Washington at the National Bureau of Standards’ Dental Materials Section, where he also helped his wife get a job, as a programmer on the Standards Eastern Automatic Computer, or SEAC. It was she who introduced him to computers. Ledley taught himself to program by examining programs (on perforated paper tape) and manuals his wife Terry brought home. Ledley started to use SEAC himself for his dental research, but after proving an adept programmer and troubleshooter, he found himself working with SEAC (and later DYSEAC) full-time on a wide variety of projects, including a remote-controlled aircraft guidance system.

At the National Bureau of Standards, Ledley’s work was primarily related to solving military problems using the techniques of operations research. When Ledley lost his job at the NBS in 1954 due to budget cuts, he turned down an offer to work for IBM (which hired Ledley’s colleagues en masse). Instead, he found employment as an “Operations Research Analyst” at the Operations Research Office at Johns Hopkins University. There, he was invited by his colleague George Gamow to the RNA Tie club, a scientific “gentleman’s club” of select individuals who contributed to the understanding of DNA. Ledley’s main work for the RNA Tie Club was an effort to generate a set of contingency tables for the purpose of writing a computer program that would determine the correspondence between any three-letter sequence (triplet) of nucleotide bases .

In 1956, Ledley was hired as an assistant professor of electrical engineering at the George Washington University School of Engineering and Applied Science. There, he taught some of the earliest courses on computer programming and wrote his first book, Digital Computer and Control Engineering (1960). Lee B. Lusted, a radiologist with a background in electrical engineering, became aware of Ledley’s work in 1956, and the two began to collaborate on developing ways to teach physicians and biomedical researchers, who rarely had much training in electronics or mathematics, to use electronic digital computers in their work. In early 1957, Ledley was hired on a part-time basis by the National Academy of Sciences – National Research Council (NAS-NRC) to conduct a national survey of current and potential computer use in biology and medicine in the United States. In 1960, Ledley founded the National Biomedical Research Foundation (NBRF), a nonprofit organization dedicated to promoting the use of computing methods among biomedical scientists.

Ini 1970, Ledley was appointed to Georgetown University’s faculty as a professor of radiology, physiology, and biophysics. Ledley’s work on computerized tomography (CT) or CAT scanners began in 1973, when Ledley was trying to raise funds for his NBRF staff at Georgetown University. After learning that Georgetown research physicians were frustrated by the $500,000 cost of a CT scanner they wished to buy from EMI (EMI-Scanner), Ledley promised them that the NBRF could build an even better machine for only half the price. Building on earlier work by the British engineer and Nobel Prize winner Sir Godfrey Hounsfield and Allan M. Cormack, whose scanner could be used only on patients’ heads, he assembled a group at Georgetown to build the Automatic Computerized Transverse Axial, or ACTA, scanner, which could scan the entire body.[1] In 1974, after several months of working with Georgetown’s machinists and auto body specialists at a nearby Cadillac dealer, Ledley’s team completed construction of the ACTA scanner. The machine had 30 photomultiplier tubes as detectors and completed a scan in 9 translate/rotate cycles, much faster than the EMI-scanner. It used a DEC PDP-11/34 minicomputer both to operate the servo-mechanisms and to acquire and process the images. Most importantly, ACTA could scan the entire body, whereas the EMI-scanner could only scan the head. 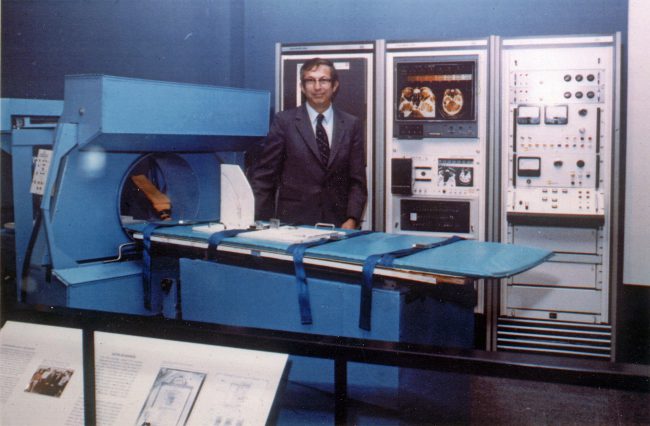 Robert Ledley at the exhibit of the ACTA whole-body CT scanner at the Smithsonian’s National Museum of American History., photo: Fred Ledley, Member and Chair of the National Biomedical Research Foundation, CC BY-SA 3.0, via Wikimedia Commons

Before the advent of CT scans, doctors relied on X-ray images, which showed only hard tissue such as bone. CT scans offer near-photographic renderings of soft tissue and organs such as the brain and heart. On X-rays, tumors show up as faint shadows or not at all. With a CT scanner, doctors can use cross-sectional images to pinpoint a tumor’s location — and without subjecting the patient to potentially life-threatening surgery.[2]

Alongside Ledley’s work on imaging technology, his NBRF colleague Margaret Oakley Dayhoff was developing resources for the study of life on the molecular level. Her 1965 Atlas of Protein Sequence and Structure sought to provide a comprehensive collection of the scientific community’s data on protein sequencing. Published annually by the NBRF, first on paper then (as the volume of information grew much larger) on magnetic tape and finally on CD-ROM, the Atlas served as an information clearinghouse for the growing community of protein sequencers. By the mid-1970s the Atlas had become the primary repository of protein sequence data, and ultimately served as a model for the Protein Data Bank and the nucleic acid sequence database GenBank, both now major resources for biologists. After Dayhoff died suddenly in 1983, Ledley and Winona Barker (who joined the NBRF in the late 1960s) took charge of the project. In the late 1980s, Ledley lead the team that developed the Bat, a three-dimensional mouse that allowed users to interact with objects in three-dimensional space (generated using stereo images). Robert Ledley died of Alzheimer’s disease on July 24, 2012, at age 86.