You are here: Home › history › Widukind of Corvey and his Saxon Chronicles 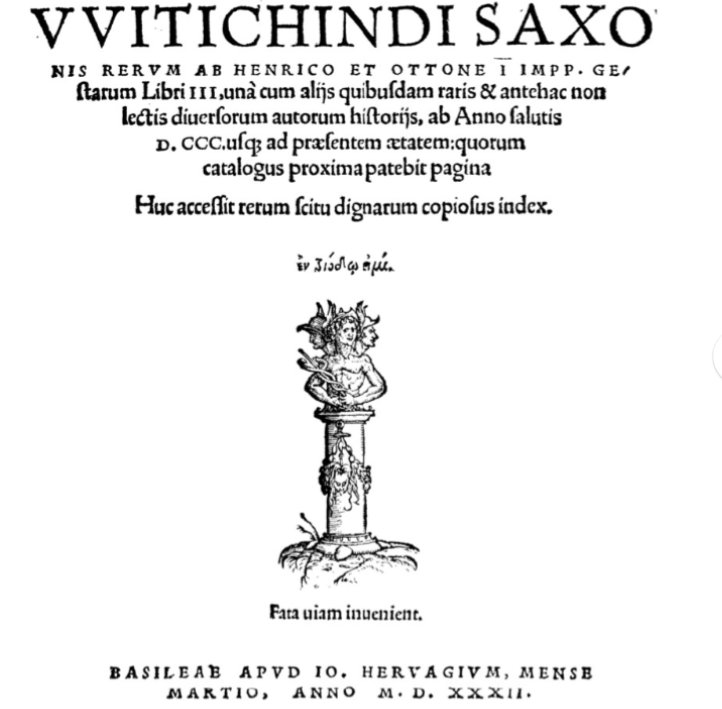 Approximately around 925, medieval Saxon chronicler Widukind of Corvey was born. His three-volume Res gestae saxonicae sive annalium libri tres is an important chronicle of 10th-century Germany during the rule of the Ottonian dynasty.

Possibly Widukind was a descendant of the Saxon Duke Widukind, the opponent of Charlemagne, because of the similarity of names.[1] Widukind entered the Benedictine monastery Corvey before 942, still under Abbot Volkmar I. According to older research it was assumed that he entered the monastery at the age of 15. His year of birth was therefore set around 925. According to another opinion, Widukind was entered into the Corvey list “as a boy of 6 to 8 years”. Therefore, his year of birth is also dated around 933/35. Before his Saxon history Widukind had written other writings, which have been lost. In the monastery he wrote 967 to 968 (then continued until 973) The Saxon history of Widukind of Corvey in three books (Latin: Widukindi monachi Corbeiensis rerum gestarum Saxonicarum libri tres), dedicated to Otto I‘s daughter, Mathilda of Quedlinburg, the first abbess of the monastery of Quedlinburg.[2] In 936 Henry the Fowler, the first East Frankish king of the Saxon ducal Ottonian dynasty had died and was succeeded by his son Otto the Great. Otto’s rise as undisputed ruler of a German kingdom against the reluctant dukes made great impression on the Benedictine monk. Otto must have seen Widukind about 28 to 30 times. The annals were continued until Otto’s death on 7 May 973. Widukind probably died thereafter at Corvey Abbey.

The Deeds of the Saxons

Widukind’s Annals of Saxony consist of three books. Each book has a preface. The prefaces are at the same time dedications and addressed to the abbess Mathilda. The first book in the history of Saxony reports on the early history of the Saxon tribe until the death of Henry the Fowler. The second book describes the events from the elevation of Otto the Great to the death of his first wife Edgitha (946). The third book originally only reached up to the year 967, but was then continued by Widukind until the death of Otto (7 May 973). The influence of the Roman historian Sallust was formative for Widukind’s historical thinking and his work.

In his work he passed on the ancestral legend of the Saxons and at the same time gave the most vivid testimony to the time of Henry I and Otto I, the latter being the main focus of his work. Widukind is imbued with the greatness and importance of the Saxon tribe in the past and its rulers of its time who rose to become the East Frankish kingdom. Widukind does not mention central events such as the coronation of Otto the Great as emperor in Rome in 962, the founding of the dioceses of Brandenburg and Havelberg and the establishment of the archbishopric of Magdeburg in 968. Nevertheless, Widukind’s work is the central source for the early Ottonian period and the historian occupies the position of a “crown witness” for the time. Widukind was not only consulted for questions concerning the functioning of the Ottonian state and society, but also for questions and topics concerning national defence, army organisation, gestures and rituals. His work is highly controversial in its source value because of its strongly pro-Saxon tendency and a series of dubious statements from late retrospect. 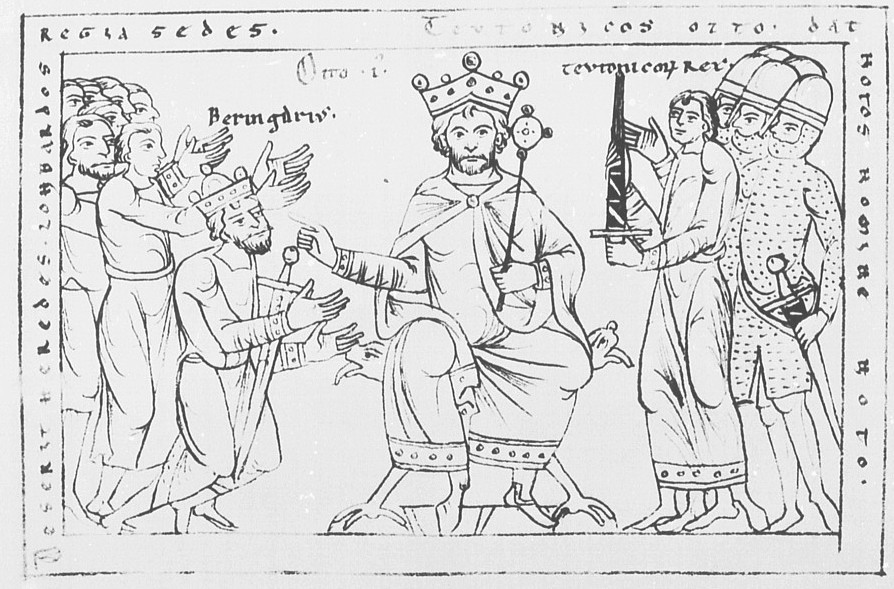 The exact time of writing the work has long been disputed. The coronation of Otto the Great as emperor in Rome and the founding of the archbishopric of Magdeburg leaves Widukind unmentioned. The conclusion to be drawn from this, that this version was written before 962, does not fit in with the mention of other events and was finally rejected by Edmund E. Stengel, who worked out the concept of a “Rome free” empire. Thus Henry the Fowler, who was never crowned emperor, is “emperor” for him and Otto receives this designation after the victorious battle against the Hungarians in 955. To this day it remains controversial whether in Saxony’s history the past has been imaginatively filled with content or a well thought-out overall concept exists.

Widukind’s work has been handed down in five manuscripts of the 11th to 16th centuries and was already received by numerous historians in the 10th century and even later. A manuscript of Res gestae saxonicae sive annalium libri tres was first published in Basle in 1532 and is today in the British Library. There are two other surviving manuscripts. The best edition was published in 1935 by Paul Hirsch and Hans-Eberhard Lohmann in the series Monumenta Germaniae Historica: Scriptores rerum Germanicarum in usum scholarum editi. Widukind is also credited with a vita of St Paul and St Thecla doubtless based on the 2nd century Acts of Paul and Thecla, but no traces of it now remain.