You are here: Home › astronomy › The Discovery of Charon, Pluto’s largest Moon 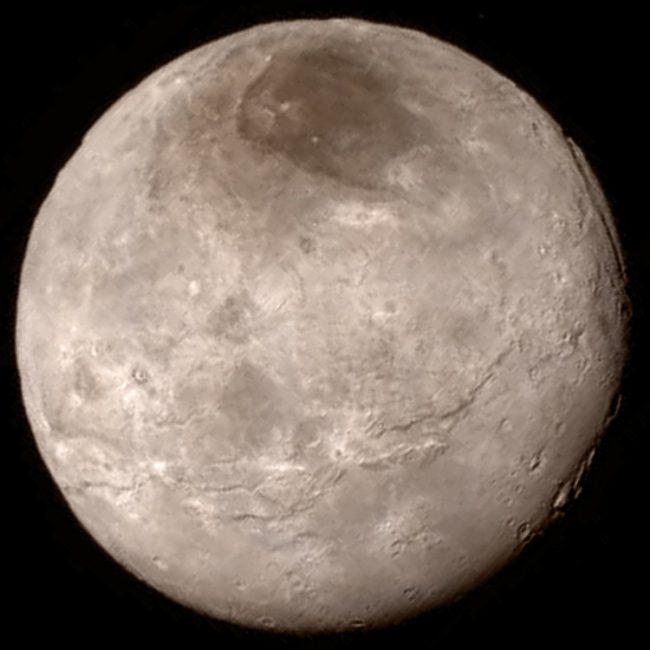 On June 22, 1978, US astronomer James Christie discovered Charon, the largest moon of Pluto. Although there was a discussion after the reclassification of Pluto as a dwarf, Charon is not in the list of dwarf planets currently recognized by the IAU.

A Bulge on Pluto

On June 22, 1978,  James Christy had examined the magnified images of the former planet Pluto, taken with the 61-inch Flagstaff telescope two months prior. He noticed a periodically appearing elongation, which was confirmed shortly after. During subsequent studies, it was determined that the bulge was due to a smaller accompanying body. Also, it was noticed that the periodicity of the bulge corresponded to Pluto’s rotation period. Between 1985 and 1990, Pluto and Charon entered a five-year period of mutual eclipses and transits and all doubts about Charon could be abolished. A few weeks after the United States Naval Observatory astronomer James Christy had discovered Pluto’s largest moon, Charon, his achievement was officially announced by the International Astronomical Union.

Pluto was discovered by Clyde Tombaugh in 1930 and was originally considered to be the ninth planet from the Sun. After 1992, its status as a planet was questioned following the discovery of several objects of similar size in the Kuiper belt. In 2005, Eris, a dwarf planet in the scattered disc which is 27% more massive than Pluto, was discovered.[6] This led the International Astronomical Union (IAU) to define the term “planet” formally in 2006, during their 26th General Assembly. That definition excluded Pluto and reclassified it as a dwarf planet.

On January 3, 1986, Pluto’s moon was officially named by the IAU after the ferryman Charon, who, in Greek mythology, brought the deceased over the river of death into the realm of the god of death Hades (Latin Pluto). The IAU thus preferred Christy’s name suggestion, which also alluded to the first four letters of his wife Charlene’s name, who he called Char.

Pluto and Charon orbit each other in an almost perfectly circular orbit retrograde to the solar system at a mean distance of 17,536 km ± 4 km around the common center of gravity, which is about 1200 km above the surface of Pluto (2360 km from the centre) due to the relatively small mass difference. This makes Charon and Pluto physically a double system. Charon and Pluto orbit each other in 6 days, 9 hours, 17 minutes and 36.7 ± 0.1 seconds, corresponding to about 14,186.63 orbits in a Pluto year (about 248.09 Earth years). Unlike Pluto’s surface, which is coated with frozen nitrogen and methane, Charon’s surface seems to consist of the less volatile water ice. In addition, unlike the heterogeneous reddish-brown Pluto, Charon appears in a uniformly neutral grey. The almost complete absence of impact craters on the (previously published) images of the New Horizons spacecraft is striking. This indicates a very young surface that has been reshaped by geological or other processes until recently, covering or removing the usually existing impact craters.

There are two theories about Charon’s inner structure: Either Charon is a differentiated body with a rock core and ice mantle, or it consists of a uniform mixture of ice and rock. The discovery of references to cryovolcanism favours the first theory. This makes Charon an ice moon. The relatively high proportion of rocky material and the absence of a noticeable atmosphere support the assumption that this relatively large moon is the product of the great collision of a predecessor of Pluto with another pluto-sized body of the Kuiper Belt, similar to the formation of the Earth Moon.[5] Observed from Earth, Charon is very faint with a brightness of 16m. 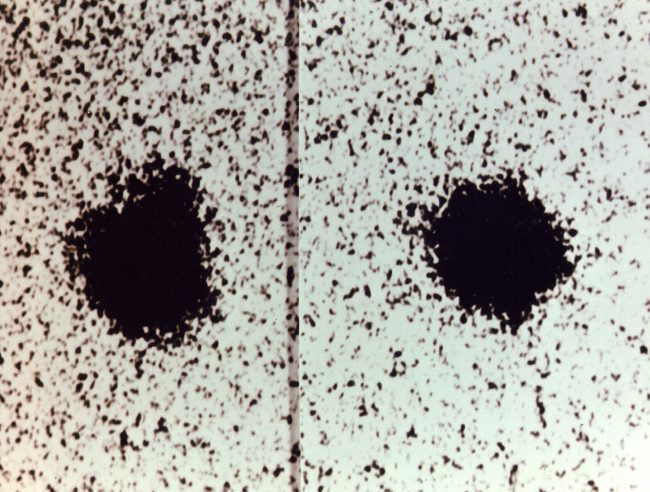 Charon’s discovery at the Naval Observatory Flagstaff Station as a time-varying bulge on the image of Pluto (seen near the top at left, but absent on the right). Negative image.

The first images showing Pluto and Charon as two separate bodies were taken in the 1990s with the Hubble space telescope. Later, the use of adaptive optics also made this possible with earth-bound telescopes. The New Horizons spacecraft, which was launched on 19 January 2006, flew past Pluto on 14 July 2015 at a distance of 12,500 km and a few minutes later passed its nearest orbit point to the more distant Charon at a minimum distance of 28,800 km. Its further trajectory led the probe through the shadows of the two celestial bodies, so that it could be used to observe both an eclipse by Pluto and one by Charon.

Mike Brown, Pluto, Eris, and the Dwarf Planets of the Outer Solar System, [7]