You are here: Home › chemistry › Walther Nernst and the third Law of Thermodynamics 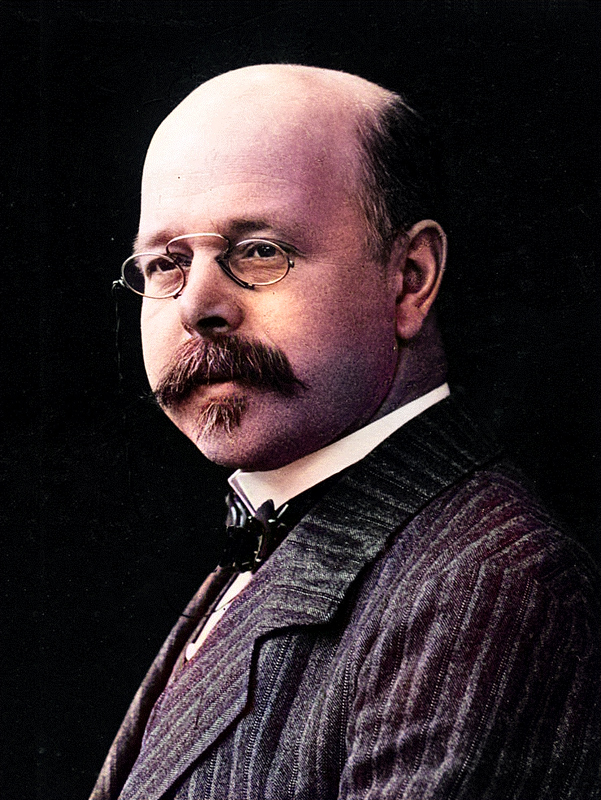 On June 25, 1864, German physicist Walther Hermann Nernst was born. One of the founders of modern physical chemistry he is best known for his theories behind the calculation of chemical affinity as embodied in the third law of thermodynamics, for which he won the 1920 Nobel Prize in chemistry. Nernst contributed to electrochemistry, thermodynamics and solid state physics. He is also known for developing the Nernst equation.

“No effect that requires more than 10 percent accuracy in measurement is worth investigating.”
— Walther Hermann Nernst

Nernst was born in Briesen in West Prussia (now Wąbrzeźno, Poland) to Gustav Nernst, a country judge, and Ottilie Nerger. Nernst had three older sisters and one younger brother. The third sister died of cholera. Nernst went to elementary school at Graudenz and went to study at the Universities of Zurich, Berlin and Graz. He began his studies in 1883 in Switzerland and moved on to Berlin in 1885. From 1886 he was able to deepen his physical interests with Ludwig Boltzmann.[4] Together with his assistant Albert von Ettingshausen, both soon discovered the Ettingshausen-Nernst effect, and Heinrich Streintz supported the mathematical discussion in Graz. Friedrich Kohlrausch offered him a doctoral position in Würzburg at the end of 1886 to further work on the topic, since the Graz University of Technology was not awarded the right to do his doctorate until 1902. In May 1887, Nernst graduated with a thesis on “Über die elektromotorischen Kräfte, welche durch den Magnetismus in von einem Wärmestrome durchflossenen Metallplatten geweckt werden“ (electromotive forces produced by magnetism in heated metal plates).

His habilitation thesis on “The electromotive effectiveness of ions“, completed in Leipzig in 1889, confirmed the model ideas on ions originally developed by Arrhenius and later further developed by Ostwald. In 1890 for a short-term he worked as private lecturer (Privatdozent) at the University of Heidelberg, then he moved to the University of Göttingen, where he was assistant to Eduard Riecke and was appointed associate professor in 1891 and full professor in 1895 for the Physical Chemistry Chair in Göttingen, where he later founded the Institute for Physical Chemistry and Electrochemistry. In the mid 1900s, Nernst was appointed Professor of Chemistry, later of Physics, in the University of Berlin. He became the Director of the newly-founded Physikalisch-Chemisches Institut in 1924 and remained there until his retirement.

It is believed that Walther Nernst’s early research work in electrochemistry was inspired by Arrhenius’ dissociation theory which put an emphasis on ions in solution. He then elucidated the theory of galvanic cells by assuming an “electrolytic pressure of dissolution” which forces ions from electrodes into solution and which was opposed to the osmotic pressure of the dissolved ions. Nernst also derived equations that defined the conditions by which solids precipitate from saturated solutions.

Walther Nernst’s heat theorem, also known as the Third Law of Thermodynamics, was developed in 1906. The scientist demonstrated that the maximum work obtainable from a process could be calculated from the heat evolved at temperatures close to absolute zero. This work provided a means of determining free energies of chemical reactions from heat measurements. In Berlin, Nernst and his students proceeded to make many important physico-chemical measurements, particularly determinations of specific heats of solids at very low temperatures and of vapour densities at high temperatures. All these were considered from the point of view of quantum theory.

With the beginning of the First World War, Nernst enlisted in the voluntary driver’s corps. He supported the German army against their opponent’s charges of barbarism by signing the Manifesto of the Ninety-Three, On 21 August 1914 he drove documents from Berlin to the commander of the German right wing in France, advancing with them for two weeks until he could see the glow of the Paris lights at night. The tide turned at the battle of the Marne. When the stalemate in the trenches began he returned home. He contacted Colonel Max Bauer, the staff officer responsible for munitions, with the idea of driving the defenders out of their trenches with shells releasing tear gas. When his idea was tried one of the observers was Fritz Haber, who argued that too many shells would be needed, it would be better to release a cloud of heavier-than-air poisonous gas; the first chlorine cloud attack on 22 April 1915 was not supported by a strong infantry thrust, so the chance that gas would break the stalemate was irrevocably gone. In 1920, he and his family briefly fled abroad because he was one of the scientists on the Allied list of war criminals. The award of the Nobel Prize to Max Planck and Fritz Haber for 1918 in 1919, to Johannes Stark for 1919 and to Nernst for 1920 in 1921 occasionally triggered critical comments abroad, however showed that the Allied governments and the international scientific community did not want to pursue the topic further. While the list of the Interalliated Military Control Commission in February 1920 included almost 900 wanted for extradition, in May 1920 it shrank to 45 names and now contained neither Nernst nor Haber.

In 1918, Nernst established his atom chain reaction theory, assuming that once the energy of a quantum has initiated a reaction in which free atoms are formed, these formed atoms can themselves decompose other molecules with the liberation of more free atoms and so on. The reaction can thus continue for long periods without further outside initiations. His book ‘Theoretische Chemie vom Standpunkte der Avogadro’schen Regel und der Thermodynamik‘ (Theoretical chemistry from the standpoint of Avogadro’s rule and thermodynamics) was first published in 1893 and the tenth edition appeared in 1921 (the fifth English edition in 1923).

Walther Nernst had a severe heart attack in 1939. He died in 1941 and is buried near Max Planck, Otto Hahn and Max von Laue in Göttingen, Germany.