You are here: Home › astronomy › Lyman Spitzer and the Space Telescope 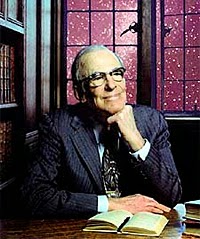 On June 26, 1914, American theoretical physicist, astronomer and mountaineer Lyman Strong Spitzer was born. Researching in star formation and plasma physics, he is probably best known for being the first to conceive the idea of telescopes operating in outer space. Thus, he is also the namesake of NASA’s Spitzer Space Telescope. Well mountaineer and astronomer at the same time, I guess we never had a fellow like Lyman Spitzer up to now. As a mountaineer, he made the first ascent of Mount Thor with David Morton in 1965. Never heard of Mount Thor or Thor’s Peak? Well, it is part of the Baffin Mountains in Canada with an elevation of 1,675m. It features the Earth’s greatest vertical drop of 1,250m, with the cliff overhanging at an average angle of 15 degrees from vertical. Despite its remoteness, this feature makes the mountain a popular rock climbing site. But, let’s focus on Spitzer and his scientific work.

“Our knowledge of stars and interstellar matter must be based primarily on the electromagnetic radiation which reaches us. Nature has thoughtfully provided us with a universe in which radiant energy of almost all wave lengths travels in straight lines over enormous distances with usually rather negligible absorption.”
— Lyman Spitzer, Jr. (1961)

Lyman Spitzer was born to a Presbyterian family in Toledo, Ohio, the son of Lyman Strong Spitzer and Blanche Carey. Spitzer graduated from Scott High School, then attended Phillips Academy in 1929 and went on to Yale College, where he graduated in 1935 being a member of Skull and Bones. During a year of study at Cambridge University, he was influenced by Arthur Eddington [3] and the young Subrahmanyan Chandrasekhar.[4] Returning to the U.S., Spitzer earned his MA from Princeton University in 1937 and his PhD in 1938, under the direction of Henry Norris Russell.

The Creation of Stars

Spitzer was just beginning his career when he published a short paper in 1946 — more than a decade before the launch of the first satellite. He proposed the development of a large, space-based observatory that would not be hindered by Earth’s atmospheric distortion and span a broad range of wavelengths. According to a new theory in Spitzer’s day, stars were powered by nuclear fusion. Calculations showed that our sun could burn for billions of years this way. But more massive stars would burn for only a few hundred million years. So, Spitzer theorized that stars were being created in the modern era, and that the intergalactic medium, a dark and mysterious place, held the reservoir of matter to create new stars. Scientists found evidence of this matter with large, ground-based optical telescopes. Yet the proof, Spitzer knew, would be found in the ultraviolet observations of young, hot stars. The Earth’s atmosphere blocks most ultraviolet radiation, so to observe these hot stars, scientists needed to send a UV detector above at least most of the atmosphere.

Spitzer continued to write seminal theoretical papers. Sounding rockets were piercing the atmosphere with X-ray and ultraviolet detectors, and a balloon carried an optical telescope above most of the atmosphere, as Spitzer had hoped. The showpiece of Spitzer’s own space astronomy work at Princeton was NASA’s Copernicus Orbiting Astronomical Observatory, launched in 1972. Spitzer was the principal investigator for this ultraviolet telescope. Copernicus did indeed find evidence of hot, young stars in dense clouds that block optical light but not all the ultraviolet light, and made many other key findings. The success of Copernicus helped secure Hubble’s funding as well as Spitzer’s legacy.

By the 1970s, the astronomy community gave the “large space telescope” high priority in a major report, which led NASA to begin a Phase A study of a 3-meter telescope in 1973. More importantly, Spitzer helped convince Congress to fund the project, which ultimately became the 2.4-meter Hubble Space Telescope.[5] Spitzer was instrumental in the design and development of the Hubble Space Telescope.[5] Even after Hubble’s launch in 1990, Spitzer remained deeply involved in the program. Not only did he make some important astronomical observations with the telescope that was essentially his brainchild, but he also spent a great deal of time — right up until the end of his life in 1997 — analyzing Hubble data. Spitzer died suddenly on March 31, 1997 after completing a regular day of work at Princeton University.